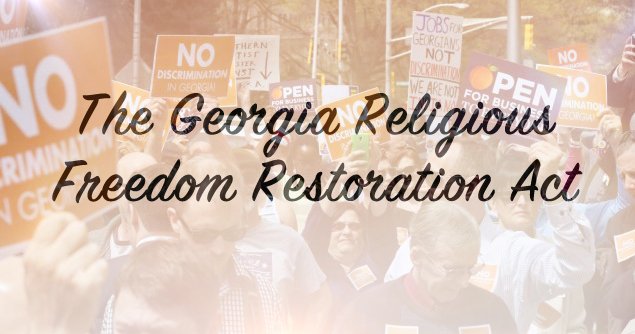 One of the most misrepresented, maligned and incorrectly reported State Bills in Georgia by the national media is House Bill 757/Senate Bill 129, “The Georgia Religious Freedom Restoration Act”.

It has been incorrectly called “Anti-gay”, a “License to Discriminate”, and even a “Bill to help wife-beaters” by various media outlets.

Of course, none of this is true and doesn’t even come close to a true representation of the intent and purpose of this bill.  It is in fact, a measure taken by the state legislature to allow freedom of choice based on your religious convictions.

First, a recap:  conventions, the NFL, Disney and others threaten to pull out of Georgia if Gov Deal signs the bill that was overwhelmingly passed by both houses. Disney has a major investment in Florida, which has a similar bill already in place, but they ignore that pesky little fact.

Other states have decreed they will no longer do business with Georgia, even though they have similar and even more rigid Religious Freedom Bills in place within their state.  Currently, there are over 20 states with Religious Freedom Restoration Acts in place.

The Georgia measure would have barred government penalties against faith-based organizations that refuse to serve someone if it would violate a “sincerely held religious belief” or hire someone “whose religious beliefs or practices or lack of either” violate its religion. It includes language based on a federal “religious freedom restoration act,” preventing government from burdening religious belief.

Public employees who refuse to perform their duties, such as a probate judge issuing marriage licenses, would not have be covered. The bill said it does not permit discrimination prohibited by federal or state law.

Then the Senate rewrote the bill, basically taking out most of the “Teeth” that would protect individuals and small businesses.

In my opinion, it has come down to money vs principles….. on both sides of the controversy.

The dilemma for the film industry is the 30% tax credit Georgia provides for doing business in Georgia along with the major investment already made in building at least eight studios around Atlanta with more currently being planned around the state.  With all the industry related businesses that have moved into the state, it would be a difficult financial decision to pull out, but with the major liberal and perverse rights groups pressing them, they were forced to push the Governor.

For the State, it represents Billions of dollars of revenue impact that is “threatening” to leave due to pressure coming from liberal groups around the country.  Governor Nathan Deal had to decide between those threats or our Georgia citizens’ religious and conservative principles, and doing what’s right for the majority of the People, not the vocal minority.

I firmly believe, with the rewrite by the Senate and the protection to Georgia business removed, it doesn’t matter that the Gov vetoed the bill as it now stands.

Editor’s note: Larry Blanks is retired and with his wife of 54 years live in Fayetteville, Georgia