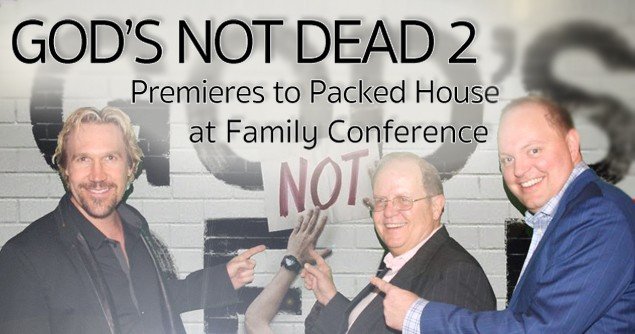 GOD’S NOT DEAD 2 Premieres to Packed House at Family Conference;

By Taylor Baehr and Tom Snyder

GOD’S NOT DEAD 2 premiered Oct. 28 to a packed house at the ninth annual World Congress of Families in Salt Lake City, Utah.

Sponsored by Founder and Publisher Dr. Ted Baehr of Movieguide®:  The Family Guide to Movies and Entertainment, the movie was screened to more than 1,000 family advocates of different religious faiths at the Grand American Hotel in Salt Lake.

Following the screening, church heads and ministry leaders dominated the Q&A with Producer Michael Scott and Actor David White of Pure Flix Entertainment, hosted by Dr. Baehr, who has long been an advocate in Hollywood, the United States and around the world for Christian movies and family-friendly movies.

One of the leaders in the audience noted:

“You could feel the anticipation as over a thousand fans crowded the ballroom, and the film did not disappoint. By the end of the night a hush had fallen over the crowd and many of us found tears running down our cheeks. I could feel the presence of God and His Holy Spirit at work. Church heads and ministry leaders raved on the timely and oftentimes hilarious way the movie highlighted the very real struggle Christians are facing as they try to remain true to their faith in the public square.”

Scott said the goal in both the first movie and this sequel is to use the film art to share the Gospel of Jesus Christ. He encouraged attendees to visit the GOD’S NOT DEAD website, godsnotdeadthemovie.com, and pre-purchase group tickets for the sequel’s April release.

“Nothing speaks louder in Hollywood,” Dr. Baehr said, “than your vote at the box office.”

Year in and year out, Movieguide®’s Annual Report to the Entertainment Industry shows that movies with positive Christian content and family-friendly movies make the most money per movie at the box office and on home video.

“GOD’S NOT DEAD 2 illustrates Hollywood wants to reach the faith and values audience with big motion pictures,” Dr. Baehr added. “It demonstrates the effectiveness of Movieguide®’s strategy of transforming the culture by redeeming the mass media of entertainment.”

Movieguide® (www.movieguide.org) is not just a movie review service for families and Christian viewers. It also shows filmmakers how to make their movies more entertaining, more family-friendly, and more morally and spiritually inspiring and uplifting.