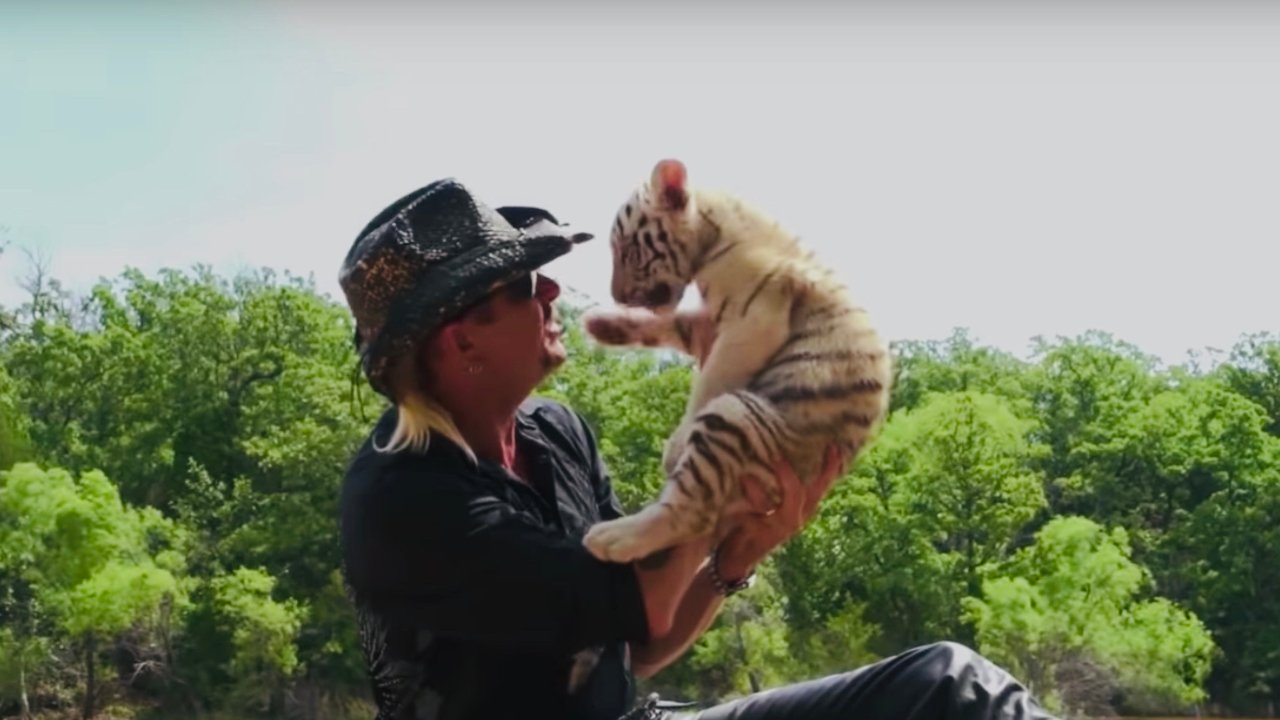 Photo courtesy of TIGER KING Trailer on YouTube with edits

Homosexual Polygamist Drug Addict Is at the Center of TIGER KING

If you haven’t heard of TIGER KING, prepare to be shocked. Movieguide® watched TIGER KING to see what all the fuss was about and this is one series that definitely doesn’t get a thumbs up.

Regrettably, the cast of characters are all warped with their own agendas, which leads, in many cases, to their own demise.

One of the main characters, Joe Exotic, a man who married two 19-year-old men at the same time, forms his own zoo in rural Oklahoma. Joe has a flare for fame in life and eventually runs out on his good fortune when he winds up in jail for multiple charges of animal abuse and a murder-for-hire charge.

However, Joe’s not the only character with skeletons in his closet.

Carole Baskin, a wildcat humanitarian who loathes Joe Exotic, remarried her now-husband after rumors that she fed her other spouse to her tigers in her animal sanctuary.

Oh, let’s not forget Bhagavan “Doc” Antle, a New Age/pagan-type wildcat owner who has apprentices that he shacks up with on his commune. One former female apprentice of Antle’s even explains in TIGER KING that he paid for her breast implants and had his female apprentices legally change their names to fit his brand.

In the final episodes, viewers meet Jeff Lowe, a married man who with his wife practices swinging with other couples and women. Jeff enters the scene to help Joe Exotic with all his financial troubles at the zoo, before later turning on him to keep his record as clean as possible with the Feds.

Sadly, TIGER KING doesn’t end with a resolution. Instead, viewers come to learn that there are less tigers in the wild than there are in captivity in the U.S.

It’s obvious that the filmmakers spent countless hours stitching together the best scenes from archival footage. The filmmakers also do a standup job getting varying perspectives on the events they document. Major wildcat players on opposing sides of animals’ rights sit down to share their knowledge and point of view, which gives viewers the opportunity to come up with a conjecture of their own.

TIGER KING remains in the Top 10 in Netflix’s content. Many celebrities shared their thoughts about the series via social media.

If I don’t get cast as Joe Exotic in the eventual biopic, Hollywood is broken.

Has anyone seen Tiger King on Netflix?!?! It is crazy!!!!

Despite the chatter, Movieguide® does not recommend TIGER KING. The limited series is absolutely abhorrent.

Below is a content breakdown of the seven episodes:

Dominant Worldview and Other Worldview Content/Elements: Mixed worldview. Very strong paganism with a mentality that anything is permissible including discussions of polygamy. Homosexuality depicted, including a gay wedding and a gay couple that dates before entering into marriage. Mild Christian worldview where a character prays in Jesus’s name, dresses up as a priest although he isn’t one and talks about God’s plan but sadly doesn’t live in accordance to God’s Word Written;

Violence: Extreme violence, including suicide (not depicted), a woman who gets her arm bitten off by a tiger, jungle cats pull apart carcasses for food, threats of murder, speculation of domestic violence and other mentions of violence in conversation;

Sex: No depicted sex, but there are conversations about sex, depiction of sex toys, homosexual couple kisses multiple times;

Smoking and/or Drug Use and Abuse: Smoking cigarettes in every episode, one instance with a cigar and mention of drug addiction and manipulating others to high;