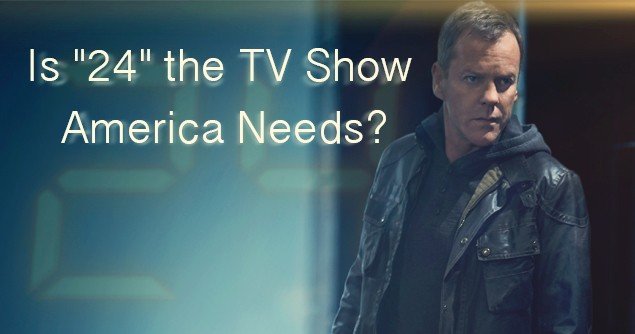 The Return of 24, America’s Patriotic Show About Islamofascist Terror

For decades, Hollywood offered moviegoers plenty of characters who were American heroes, serving up tales of brave soldiers and spies who always managed to save the nation from danger. However, ever since the turbulent changes of the 1960s, movie studios and TV networks have instead mostly chosen to show the military and intelligence communities as evil.

Perhaps the strongest exception to that leftward surge has to be the Fox network TV series “24,” which throughout eight seasons from 2001 to 2010 presented viewers with an ultra-secret agent named Jack Bauer, who somehow always managed to have the Worst Day Ever. Played with intense urgency by Kiefer Sutherland, Bauer managed to unearth a threat to our nation’s existence and fully solve it and save the day at least eight different times from tragedies ranging from terrorism to biohazards to nuclear bombs. After a four-season break, Bauer and his series came back to Fox this spring and summer, with the newest season’s finale airing this coming Monday night, July 14.

The series debuted in the fall of 2001, just weeks after 9/11 seared itself into our national memory. Some called for this new series, which focused on fighting terrorism, to be delayed or canceled altogether because they deemed it to be too strong for American viewers after the fall of the Twin Towers.

Fox stuck to its guns and ran the series as previously scheduled, and the result was a phenomenon which cheered those viewers who wished that shutting down terrorists could be as simple as Bauer made it seem. It also drew harsh criticism from those who felt that the show had far too laid-back an attitude towards the Machiavellian idea that “the end justifies the means.”

Sure, Jack drove recklessly and shot or punched out seemingly countless suspects just to learn information that was key to his save-the-day mission. The show once also infamously implied that Bauer even beheaded a man he had already shot, just to gain the trust of a bad guy.

Set aside the surface debate over how much violence is too much for viewers to handle, and 24 also fueled an intense debate about the way America could or should respond to terrorism. Jack could be an unstoppable killing machine, but he always conducted his actions with one single-minded purpose:  to save the country he loved.

As the liberal media’s leading newspaper The New York Times chose to see it, “the series enlivened the country’s political discourse in a way few others have, partly because it brought to life the ticking time-bomb threat that haunted the Cheney faction of the American government in the years after 9/11.”

Perhaps the key to the show’s daringly conservative point of view came from the fact that at least one of its producer/creators had worked in intelligence during the golden years of President Reagan. The producers have consistently rejected criticisms of the show’s conservative bent and fearlessly maintained their vision.

Yet, despite all the years of controversy, high ratings and Emmy wins, 24 left the airwaves in 2010, starving its devoted fans of world-saving heroics right as they were mired in a real-life world in which the toothless Obama administration policies towards the Middle East were helping set the stage for the current radical Islamist uprising in Iraq and Syria. As that part of the world spins into more madness, it seemed that America was reduced to having little or no impact on the increased volatility in the Middle East.

After three years away from the air, Fox surprised fans by announcing 24 would return during this summer season, albeit in just 12 episodes covering half a day. The ability of Bauer to save America in half the time as before has proven to be irresistible to his followers, and the show has proven to be almost a big hit now as it was back when it finished its initial run.

The show once again has been fearless in presenting radical Islamists as a core part of the terrorists, not to mention Russians and Chinese. That’s a far cry from much of Hollywood’s politically correct offerings of the past decade, in which they seem utterly afraid to portray Muslims or other longtime enemy nations as causing any problems in the world whatsoever.

It’s possible for Christians and conservatives to wonder whether the show endorses far too much violence, or whether Bauer is offering criminals and terrorists the proper due process afforded by law, but, in a time when our nation’s leaders and intelligence operatives are proving to spy on average Americans more than the world’s truly threatening figures, it’s refreshing to see a show and a hero who operates with an unwavering, at-all-costs patriotism.

Also, so far in the current season, all the bad guys have gotten their comeuppance, and Jack Bauer has kept the republic mostly safe for the time being. In addition, the show certainly has had many viewers on the edge of their seats almost constantly as they wait to see what happens next.

However, although this season’s episodes are very well made and exciting, 24 is not for children or impressionable, susceptible teenagers because it has lots of strong violence with some blood, images of gravely wounded dead bodies, and an occasional obscenity or profanity. The show also has themes of torture or attempted torture. Thus, MOVIEGUIDE® advises strong or extreme caution.