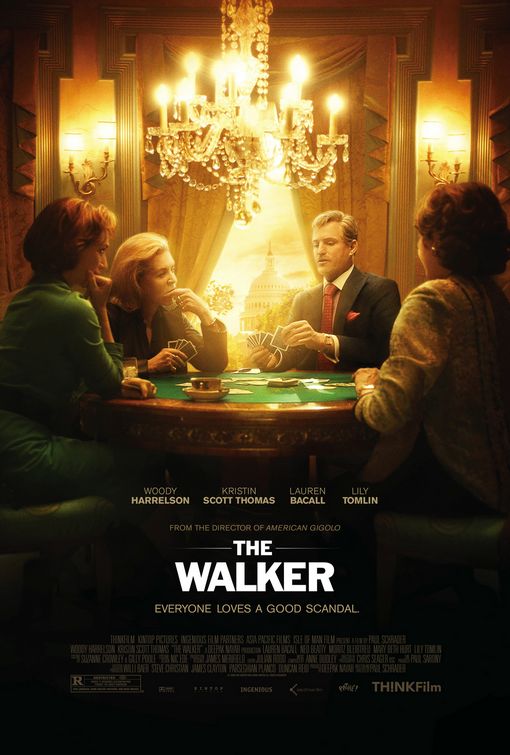 In THE WALKER, a thriller, Woody Harrelson plays Carter Paige, the homosexual son of a dead fictional politician who stood up against President Nixon during Watergate. Carter is a walker, a male companion to rich women in Washington, D.C. who drives them around and keeps them entertained with witty conversation. Carter’s world is turned upside down when the male lover of his long-time female friend, Lynn, the Senate Minority Leader’s wife, turns up murdered. Carter covers up for Lynn and calls the police, which makes him a prime suspect. To clear his name, Carter must investigate the crime, but this puts his life in danger.

As a mystery, THE WALKER is well produced. Woody Harrelson does a fine job portraying the protagonist, who is an appealing character. Thus, the movie makes one root for him. In the end, however, the movie takes the position that all or nearly all of America’s political leaders are corrupt. It even includes some leftist, politically correct comments in a couple scenes. THE WALKER also contains very strong homosexual references, foul language, and shots of artsy photos with a completely nude model in them.

(HH, HoHoHo, PCPC, APAP, LLL, VV, SS, NNN, A, D, MM) Strong, mostly implied humanist worldview with very strong homosexual references, including two men kiss, and strong politically correct content briefly attacks conservative values, with some anti-Bush administration implications, and promotes false, radical liberal ideas such as “separation of church [meaning all religion and all biblical morality] and state,” plus an anti-American statement says all politicians in Washington, D.C. of both main American parties are corrupt and playing “gotcha” politics and another anti-American statement calls the United States an “aggressor nation”; 20 obscenities (including some “f” words), two strong profanities and six or seven light profanities; some strong violence, especially bloody wounds on the clothed body of a dead person who’s been stabbed to death, plus man beaten up, threats of violence, and villain chases one man but gets hit by car; no nude sex but depicted homosexual kiss and other homosexual references, including hero’s male lover abandons him in a homosexual bar for possible sexual tryst with a much younger man but later confesses his “love” for him when protagonist gets into trouble, plus married woman is having an affair, which her homosexual male friend facilitates in one scene; full male nudity in artsy photos of a male model; alcohol use; smoking; and, people enjoy dishing out and hearing gossip and witty insults, political corruption rebuked, lying, and man falsely but tentatively posits that all great art must be controversial.

THE WALKER is the new thriller written and directed by Paul Schrader, the acclaimed screenwriter of TAXI DRIVER, RAGING BULL and THE LAST TEMPTATION OF CHRIST. It is part of a trilogy beginning with the well-known 1980 thriller AMERICAN GIGOLO starring Richard Gere and the lesser-known 1992 thriller LIGHT SLEEPER.

In the story, Woody Harrelson plays Carter Paige, the homosexual son of a dead fictional politician who stood up against President Nixon during the Watergate scandal. Carter is a walker, a male companion to rich women in Washington, D.C. who drives them around and keeps them entertained with witty conversation.

Carter’s world is turned upside down when the male lover of his long-time female friend, the Senate Minority Leader’s wife, turns up murdered. Carter actually drove Lynn to a tryst with this man, whereupon Lynn discovered the body.

Carter covers up for Lynn and calls the police, but this makes him a prime suspect. The fact that the dead man once convinced Carter and many other people in Washington to make a bad investment in a company now under Congressional investigation doesn’t help.

Carter decides to investigate the crime on his own. His male lover tries to help him out, but it puts both their lives in danger.

As Carter investigates the murder and the police put more pressure on him, his rich, politically connected female friends desert him. Hurting him more is the fact that his close friend Lynn has made herself incognito, which leaves Carter out to dry.

As a mystery thriller, THE WALKER is well done. Woody Harrelson does a fine job portraying the protagonist, who is an appealing character, psychologically speaking. Thus, the movie makes you root for him, although in the end the things that happen to him confirm his sarcastic, cynical left-wing political attitudes about American politics.

Despite some leftist, politically correct and anti-American comments in a couple scenes, the main political message of the movie is that American politics are corrupt. In fact, Lynn tells Carter at one point that all the politicians in Washington, D.C. just want to cause trouble for one another while jockeying for power. This gives the movie an apparent humanist and cynical worldview. The upshot of all this is that Carter eventually decides that he no longer cares to be accepted by his former rich friends, whose society is, according to this movie, based on hypocrisy, corruption and betrayal.

This, apparently, reflects the humanist position of writer/director Paul Schrader, who, though he once attended a Christian college as a young man, told MOVIEGUIDE® recently that he is now a committed atheist who believes that Judaism and Christianity come from the same mold as the 9/11 Muslim terrorists and other Muslim jihadists. It should also be noted that Schrader said he believes that political statements by Republican politicians against the left-wing homosexual agenda are “sexual hypocrisy” because there are closeted homosexuals within the GOP leadership.

Here, it is interesting to note the hypocritical, immoral actions of the homosexual characters in this pro-homosexual movie. For instance, the protagonist’s male lover cheats on him with a young man he meets in bar, then later professes his “love” for the protagonist. Then, there is the fact that homosexual protagonist actually drives his married female friend to her adulterous tryst with her own male lover. Like many pro-homosexual movies, this shows that those people who preach the homosexual agenda and revel in the perverse sexual practices that is homosexuality, as well as those homosexually active people who “come out of the closet,” are just as morally corrupt and hypocritical as anyone else, including their opponents.

The Good News is that, through Jesus Christ, God offers us repentance and forgiveness for all of our sins, including sinful homosexual behavior and marital infidelity. This does not, however, let us off the hook from preaching the moral laws that God has established for all people everywhere. Thus, a self-declared follower of Jesus, or member of a recognized Christian church, who publicly accepts homosexuality, adultery or any other sin – as many leaders, pundits and celebrities have done – is making a mockery of his or her faith. Such people are the ultimate hypocrites and false teachers. Their misguided public actions and speeches present a grave public danger to all the world’s children. We must publicly and/or privately call them to repent and turn to Jesus.