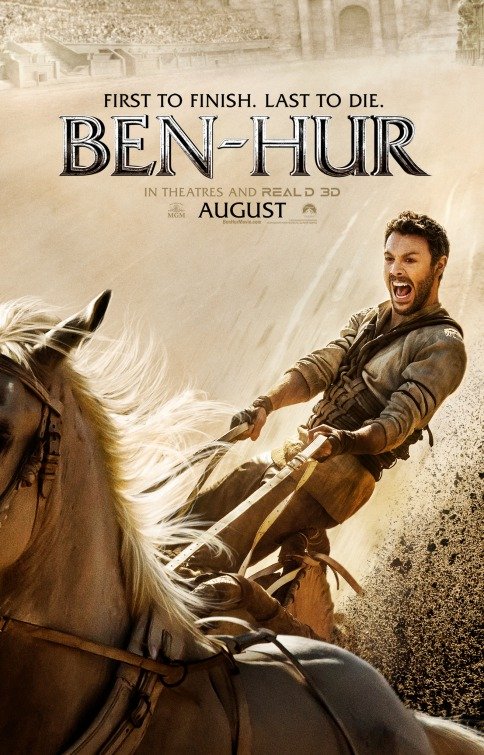 BEN-HUR is a big-budget, 2016 remake of the beloved 1959 classic starring Charlton Heston. It features Jack Huston in the title role of the Jewish prince, Judah Ben-Hur, who runs afoul of his Roman friend, Messala. In this version, a wounded zealot Judah helped rescue from certain death betrays him and tries to kill Pontius Pilate as Pilate rides into Jerusalem with his army. Messala imprisons Judah’s wife and mother and turns Judah into a slave, but Judah’s wife escapes. Eventually, Judah gets free and returns to Jerusalem. Will Judah himself pursue revenge or forgiveness against Messala?

The energy of BEN-HUR explodes when Judah finds himself on a Roman slave ship. The raging sea battle and pulse-pounding chariot race that ensue are spectacular. Also, Jack Huston’s performance as Judah gets stronger and stronger. That said, this version lacks the majesty of the 1959 classic. Although it has more and stronger Christian elements, BEN-HUR still omits references to Christ’s resurrection and the good news that Jesus saved us from our sins. Though this is the case, the movie is entertaining, exciting, and enjoyable.

(CC, BBB, FR, Pa, L, VV, S, N, A, M) Strong Christian, moral worldview promoting repentance and forgiveness, with some Christian, biblical references to God, Jesus Christ and the Bible, including dialogue from the New Testament documents, but the movie contains no resurrection references or scenes and leaves viewers with no presentation of the Gospel of Jesus (Jesus says he goes to the Cross willingly, but He doesn’t say it’s to die for Man’s sin, and no one else says that either), plus some false religion where Roman character has some small false pagan idols, and the Romans of course are pagans, and they do crucify Jesus, but the idols are considered false in the movie, and the Roman crucifixion of Jesus is considered wrong and unjust, even though Jesus goes willingly to the Cross; one “d” word and four exclamatory profanities, plus one “for God’s sake” that’s an appeal rather than an expletive; strong and light, sometimes intense, action violence includes a Zealot tries to kill Pontius Pilate with an arrow, a huge sea battle, rowing slaves are in danger of drowning during sea battle, ship rams Roman galley and endangers slaves lives, training of chariot horses results in one man falling off, and Judah Ben-Hur corrects the problem, people arrested and thrown into dungeons or made into slaves, Romans crucify rebels and other people, Jesus is crucified, and intense chariot race involves lots of thrills, spills and charioteers being run over by horses, with one charioteer losing a limb, plus two women get leprosy; no depicted sex, but married couple kiss, and they are shown lying in bed together, so marital sex is implied; upper male nudity; light alcohol use/references; and, hero is betrayed by a man he helped, and he’s made a slave, and his sister and mother are thrown in jail, plus bad guys do bad things.

This exciting remake of the beloved 1959 classic starring Charlton Heston features Jack Huston in the title role of the Jewish prince who runs afoul of his Roman friend, gets sentenced to a slave ship and must come to terms with his lust for revenge against his former friend while crossing paths with Jesus Christ and his disciples, who preach love and forgiveness. This BEN-HUR is very exciting and contains some strong Christian content; however, it lacks any references to Jesus Christ’s resurrection and turns the Christian message of salvation by faith in Jesus into a mere moral lesson about forgiveness.

The new version opens with Judah Ben-Hur and his adopted brother, Messala, a Roman orphan, racing their horses in the desert. Judah suffers a terrible spill on his horse and is severely injured; so, Messala carries Judah on his back all the way home.

Since Judah’s mother will not allow Judah’s sister Tirzah and Messala to marry, Messala informs Judah he wants to leave their home and seek his fortune as a Roman soldier abroad. Thus, after Judah recovers from his injuries, Judah must regrettably say goodbye to his friend.

Several years later, Messala returns a hardened Roman soldier, who knows first-hand the brutality of war. Messala asks Judah, who’s now married to Esther, to help him and his boss, Pontius Pilate, quell the growing unrest in occupied Israel. Judah agrees to help, but there are some things he refuses to do for Messala and Pilate. In fact, Judah hides a young Jewish zealot, who’s been injured seriously by the Romans. The zealot betrays Judah’s kindness and tries to assassinate Pilate from Judah’s house when Pilate enters Jerusalem with his army.

Messala blames Judah as well as Judah’s sister and mother, so he has them arrested. Judah’s wife, Esther escapes, but Judah forbids her to try to save him. He tells her to hide.

The Romans sentence Judah to be a slave on a galley ship. Fueled by his revenge and hatred for Messala, Judah survives a tremendous sea battle. He ends up making friends with a sheikh, who encourages Judah to seek his revenge in the arena in a chariot race. The sheikh has four beautiful white horses, who show an affinity for Judah. So, Judah travels with the sheikh to Jerusalem.

Meanwhile, Judah learns his wife, Esther, has become a disciple of Jesus, but he is yet to find if his mother and sister are still alive. Eventually, Judah has a choice to make: continue to pursue revenge or find forgiveness in his heart.

When Judah finds himself on the Roman galley ship, the raging sea battle that ensues is spectacular. So is the climactic chariot race where Judah seeks his revenge against Messala.

Jack Huston turns in a strong performance once the stakes for Judah Ben-Hur are raised. That said, Morgan Freeman’s performance as the sheikh is too subdued. Also, the final dramatic scenes after the chariot race and Christ’s crucifixion could have been staged more dramatically. Though this is the case, the story was exciting and entertaining. The chariot race was well done, and overall, the movie built suspense.

Unlike the 1959 movie, the new BEN-HUR contains some overt biblical references when Judah witnesses the Christ’s crucifixion. However, like the 1959 movie, there are no references to the resurrection. Also, like the 1959 version, Jesus falls down while carrying the cross on the way to Calvary. Judah gives Jesus some water, just as Jesus did when Judah was being marched under the hot sun. Judah starts to pick up a rock when a Roman soldier orders him to stop, but Jesus admonishes him, saying that it’s His choice to lay down His life.

Despite this touching scene, the movie doesn’t spell out why Jesus is laying down His life. As a result, the movie’s strong, overt message of forgiveness seems more like just a moral lesson. Even so, BEN-HUR is a very entertaining, powerful re-imagining of the famous novel.

Ultimately, caution is advised, mostly for some of BEN-HUR’s intense violence. The good news is that the movie’s ending sets viewers up for a possible sequel, where Judah and his family and friends go to Rome and meet with Christ’s disciples, as they do in the original novel. Overall, audiences will enjoy BEN-HUR.