DON’T WORRY, HE WON’T GET FAR ON FOOT 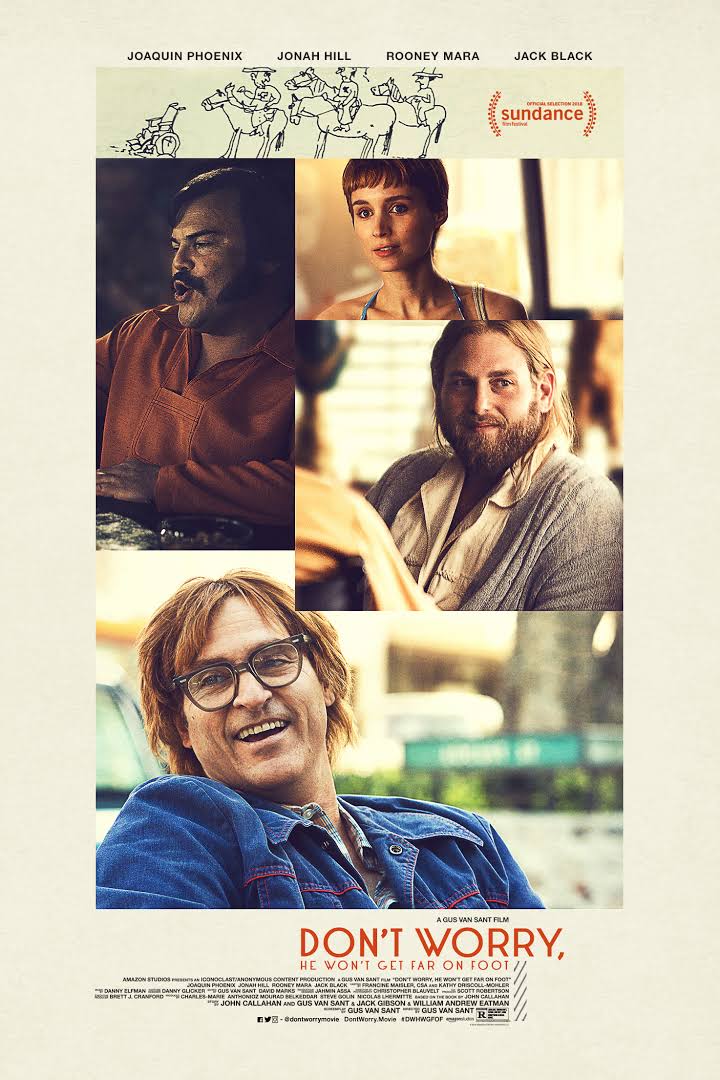 Using a quirky nonlinear style, DON’T WORRY, HE WON’T GET FAR ON FOOT tells the story of alcoholic quadriplegic John Callahan, who wrestles with his addiction and his handicap. The heart of the movie focuses on John's relationship with his Alcoholics Anonymous group, led by his sponsor, Donnie. John recovers not only from his medical condition, but also from his addiction and from the childhood trauma of his mother’s abandonment. As he recovers, John discovers his talent as an irreverent cartoonist and begins to turn around his life.

Sadly, John’s method of recovery rejects biblical principles and mocks Jesus Christ and Christians. The movie’s main message is personal enlightenment through whatever “higher power” you want to follow, mixed with a strong nihilistic sentiment that life doesn’t have as much meaning as we think. DON’T WORRY, HE WON’T GET FAR ON FOOT has a strong humanist, politically correct worldview with lots of overt Anti-Christian, heretical elements. It also contains abundant foul language, explicit lewd content, and strong homosexual references. Media-wise viewers will want to skip DON’T WORRY, HE WON’T GET FAR ON FOOT.

(HHH, PCPCPC, AbAbAb, FRFR, HoHo, B, C, LLL, V, SS, NNN, AAA, D, MM):
Dominant Worldview and Other Worldview Content/Elements:
Very strong humanist, nihilistic, anti-supernatural, politically correct worldview with very strong Anti-Christian content that also mocks Christians about a quadriplegic man overcoming his alcoholism but whose story seems to fulfill an early nihilistic comment that “maybe life isn’t supposed to be meaningful,” some talk in an Alcoholics Anonymous context of finding a “higher power,” but the higher power is reduced to a statement favoring mere “enlightenment” and is defined as anything that’s relevant to each person individually only, recovery group leader says one’s higher power doesn’t have to be Jesus or Buddha or any deity, protagonist starts calling his higher power “Chucky” after the killer doll from the horror movie, other Anti-Christian and heretical elements include protagonist making fun of Christians for being too sensitive after he draws offensive cartoons that include one depicting Jesus on the cross saying, “T.G.I.F.,” protagonist says after his accident that he prays to both God and the Devil in hopes that one will answer his prayer to walk again, plus strong homosexual references and some light moral, redemptive themes of community and forgiveness as protagonist works through a 12 Step program;
Foul Language:
At least 78 obscenities (including about 60 “f” words), five profanities (including one or two strong ones), and two scenes of depicted vomiting;
Violence:
Light violence such as a comical scene of quadriplegic protagonist falling out of his wheelchair onto the pavement, and there’s a depicted aftermath of a car crash;
Sex:
Strong sexual content includes oral sex, a scene of depicted, clothed intercourse, two characters discuss oral sex in graphic terms, hospital shows a “sexual activity” video for quadriplegics, protagonist says he prefers friends he can “get laid with,” protagonist makes an innuendo about a layover, protagonist has a meeting with a therapist about sex after his injury, character recites a homosexually erotic poem, references to protagonist’s AA sponsor being homosexual and getting AIDS, and protagonist draws cartoon about lesbians;
Nudity:
Brief very strong and some strong nudity includes two characters go to a strip club with depicted topless female dancers, a character reveals a pen with a pornographic image, an educational video for quadriplegics includes sexual and pornographic nude images, and three scenes of John being bathed (but nothing explicit shown);
Alcohol Use:
Depicted alcoholism and alcohol abuse throughout the movie, early scenes depict protagonist sneaking drinks in every scene, multiple scenes of drinking while driving, a multi-scene sequence of hard partying as characters continue to drink and drive although already drunk, and protagonist tells story of trying to find more alcohol before his buzz wears off, pours hard liquor into a glass of beer, drinks out of liquor bottles after his accident, makes references to wanting a drink in the hospital, and yells obscenities to his caretaker for not letting him have a drink.
Smoking and/or Drug Use and Abuse:
Protagonist smokes in multiple scenes including one scene where he smokes hungover in the shower, second man smokes in a few scenes, and three instances of characters smoking in bars (since the movie is set in the 1970s where many people smoke tobacco), but no drug references; and,
Miscellaneous Immorality:
Strong miscellaneous immorality includes broken family relationships, protagonist consistently refers to being abandoned by his mother and never mentions his father, and protagonist’s cartoons often contain offensive content and subject matter, including racism, KKK members, and other inappropriate topics.

DON’T WORRY, HE WON’T GET FAR ON FOOT is the true story of John Callahan, a man who battled alcoholism both before and after an injury that left him paralyzed. Although the movie has excellent performances and some sweet moments, it gets bogged down by excessive foul language, crude content, and strong Anti-Christian, politically correct elements.

Through a nonlinear, quirky fashion, the movie follows John (Joaquin Phoenix) as he tells his life story, from his mother’s abandonment, to becoming an alcoholic at the age of 13, to the deadly car crash that left him a quadriplegic. The movie bounces back and forth between the night of the crash (a night where John partied too hard and got in a car with a drunk driver), his medical recovery, and the aftermath.

The heart of the movie, however, focuses on John’s relationship with his group in Alcoholics Anonymous. Leading the group is his AA sponsor, Donnie (Jonah Hill). With help from the group and his sponsor, John recovers not only from his medical condition, but also from his addiction and from the childhood trauma of his mother’s abandonment. As he recovers, John discovers his talent as an edgy, irreverent cartoonist and begins to turn his life around for the better.

The best part of DON’T WORRY, HE WON’T GET FAR ON FOOT is the performances. Led by Joaquin Phoenix as John and an excellent supporting turn by Jonah Hill, the chemistry between the characters creates a solid community of support for John’s story. There are light themes about the power of community and acceptance through John’s AA group. As John goes through the 12 Step program, he also learns the power of forgiveness as he makes amends to people wronged in the past. Despite these positive elements, including some sweet moments, much of the movie gets lost in depicting John’s alcoholism and lifestyle, combined with excessive foul language and strong sexual content. In fact, the movie’s negative messages far outweigh the positive.

For example, it’s good that the movie’s excessive scenes of drinking are depicted in a negative light and that John’s recovery comes from overcoming his addiction. However, he accomplishes this through a silly, generic path of personal “enlightenment,” where John’s sponsor, Donnie, constantly tells John that he needs to find a higher power, but says it doesn’t actually matter what the higher power is. Donnie blatantly rejects Christian ideals by telling John that his higher power doesn’t have to be Jesus. In fact, John often goes so far to say that his “higher power” is Chucky, the killer doll from the horror movies. This offensive, abhorrent, heretical notion is a running joke throughout the movie.

The movie’s Anti-Christian problems don’t stop with Donnie’s heresy or John’s rejection of Jesus as a higher power. After his accident, John says he prays to both God and the Devil in hopes that one will answer his prayer to walk again. He even says he tells the Devil, “I’ll give you anything you want.” Later, however, the movie seems to reject the notion of a higher power altogether. For example, at another point, Donnie says the goal is not the higher power, but “enlightenment.”

Eventually, John becomes known for his offensive, crass, irreverent cartoons. He then mocks Christians for sending complaint letters. His cartoons include a picture of Christ on the cross saying the words, “T.G.I.F” as well as offensive cartoons featuring the KKK, racist comments, and obscene images. Thus, the movie turns John into a cultural hero for his unique and comical mind, even though many of his cartoons cross the lines of good taste and true intelligence. Also, the movie’s opening scene ends with the line, “Maybe life isn’t supposed to be meaningful,” and John’s story seems to play out this nihilistic premise. Thus, while John does indeed manage to beat his alcoholism and find a way to live life as a quadriplegic, he never finds meaning and blatantly rejects notions of faith and a true higher power in God.