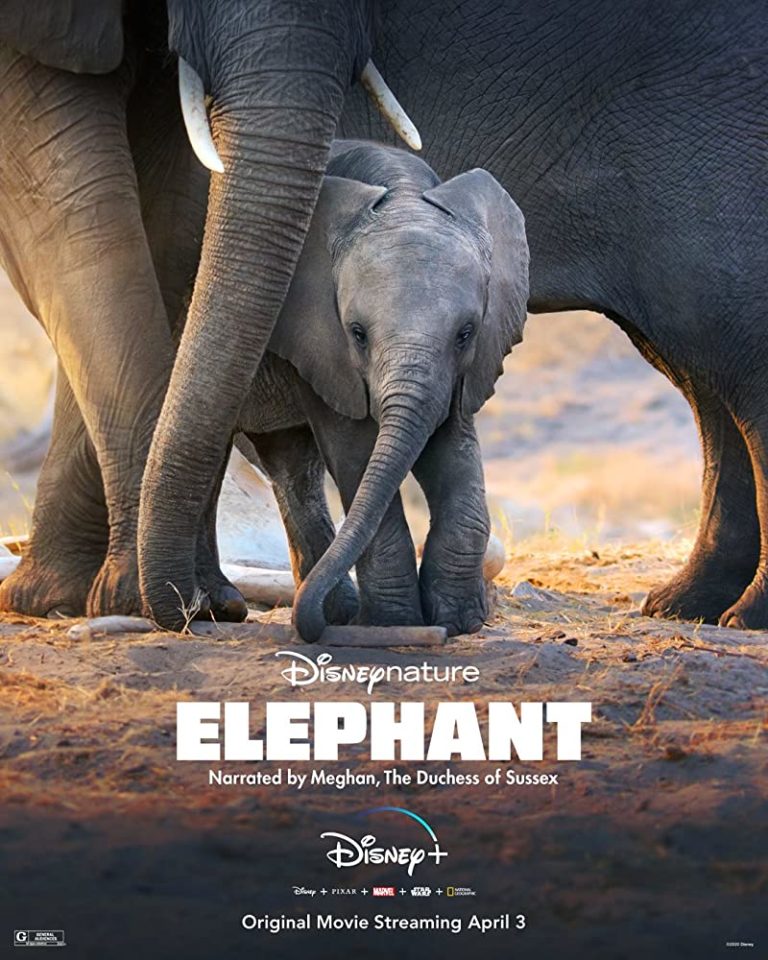 ELEPHANT is an amazing documentary about a herd of elephants that take an 8-month roundtrip across a desert in Africa. Jomo, a 1-year-old elephant calf, has no clue what’s in store for him when his mother, Shani, and his aunt, Gaia, the matriarch of the herd, spearhead a journey looking for water and searching for safety along the way. Through this adventure, Jomo learns many valuable life lessons. Also, the herd feels the growing pains of changes that impact their tight-knit family.

ELEPHANT has a strong moral worldview where family comes first and some environmentalist elements stressing the beauty of nature and the animals that inhabit it. ELEPHANT has relatively few questionable elements, but there is a scene where two amorous elephants get together and a scary scene where elephants ward off lions. Thankfully, no elephant gets hurt by the lions. Parents watching the movie with their children should reassure them of the power they have to keep them safe. ELEPHANT also shows there’s much to gain from the wisdom of older generations. Viewers also learn that elephants are extraordinary social creatures.

(BB, C, E, V, S, M):
Dominant Worldview and Other Worldview Content/Elements:
Strong moral worldview with some redemptive content where the older generation keeps watch over the young, protection of the herd is stressed, and sacrifice is honored, plus some light environmentalist elements mainly stressing the beauty of nature and the animals that inhabit nature
Foul Language:
No foul language, brief humorous potty humor in one scene
Violence:
Survival violence includes a bird eats a whole frog, a few high stakes moments where lions could eat elephants and pursue them but no one gets hurt, and an elephant dies of natural causes
Sex:
An elephant mounts another elephant
Nudity:
No nudity
Alcohol Use:
No alcohol
Smoking and/or Drug Use and Abuse:
No smoking or drugs; and,
Miscellaneous Immorality:
Rival elephant herds sometimes kidnap another herd’s young but it doesn’t happen in this movie.

ELEPHANT is an amazing nature documentary about a herd of elephants that take an 8-month roundtrip across the desert in Africa.

Jomo, a 1-year-old elephant calf, has no idea what’s in store for him when his aunt Gaia, the matriarch of the herd, and his mother, Shani, prep the herd for an eight month long roundtrip journey. This family of elephants spends their years following water amidst the desert of the African plains, which is the point of interest in ELEPHANT.

Jomo’s Aunt Gaia is a 50-year-old elephant. She uses her memory to guide her herd on the 1,000-mile journey. First, they leave the watering holes when the water starts to dry. They head for new territory that will satisfy their needs. Along the way, a fellow calf of Jomo’s gets stuck in a mud pit, but Gaia jumps to his rescue. This isn’t the only time in the movie that the older generation protects their young. Whether it’s finding water or protecting the defenseless from a pack of lions, these elephants always put their youngest first.

Viewers observe the African wildlife in its grandeur. Beautiful scenic shots, pans and time lapses brilliantly display bold colors and the vastness of the terrain. Also, while following a sweet story about family, viewers learn that elephants are extraordinary social creatures who filmmakers assert, really never forget, just as the saying goes.

ELEPHANT also showcases the bookends of life, the beginning and the end, in a way that shows there’s much to gain from the wisdom of older generations. Meghan Markle does a fine job as the narrator, and the music fits perfectly with the onscreen action.

ELEPHANT has a strong moral worldview where family comes first, with some environmentalist elements stressing the beauty of nature and the animals that inhabit it. ELEPHANT has relatively no questionable elements but there is a scene where elephants ward off a pride of lions, but thankfully no one gets hurt. Parents watching ELEPHANT with their children should reassure them of the power they have to keep them safe.

Starring: The voice of Meghan Markle as the narrator