HOPE IN THE HOLY LAND

"The Only Way to Overcome Our Enemy Is by Loving Him" 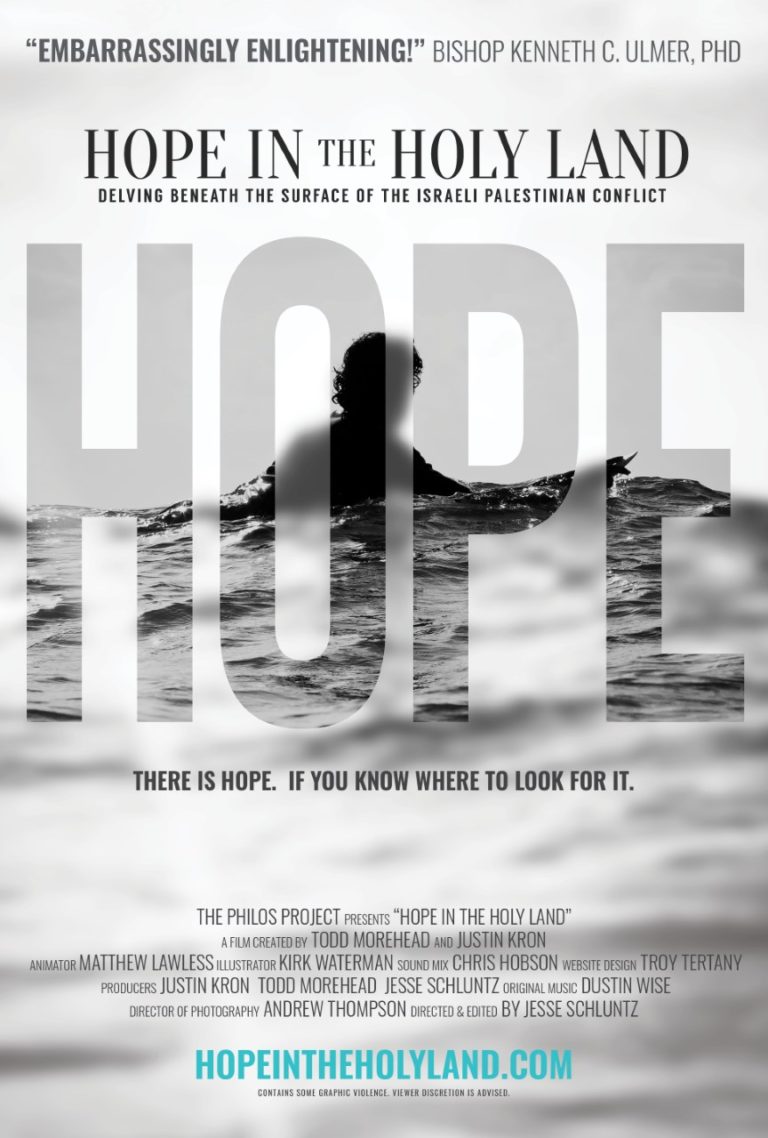 HOPE IN THE HOLY LAND is a documentary streaming on SalemNOW. It follows an American Christian named Todd Morehead, who travels throughout Israel, Gaza and the West Bank to expand his understanding of the Israeli-Palestinian conflict. Interviewing Palestinians and Israelis, Todd realizes the situation’s complexity. He notes the suffering many Palestinians face, and the desire of Jews to have a nation. Todd decides the only way to overcome an enemy is by loving them. However, he agrees that Jews should have a recognized nation and is sympathetic to the suffering Palestinians face. He prays a solution can be reached through education, work and a recognition of humanity.

HOPE IN THE HOLY LAND approaches a complicated conflict with compassion using a Christian lens. The movie promotes love for our enemies and hope that the conflict will be resolved one day. However, it contains some graphic and strong images of violence to illustrate the turmoil in the Holy Land. Some scenes include massacres, bloody bodies and images from the Holocaust. MOVIEGUIDE® advises extreme caution for the stronger violent images in HOPE IN THE HOLY LAND.

(CC, BB, VVV, N, A, D, M):
Dominant Worldview and Other Worldview Content/Elements:
Strong Christian, biblical, moral worldview highlights biblical prophecy, love, forgiveness, and acceptance, the documentary talks about Abraham and Moses and that the Holy Land would be a place for Jews to live, lead figure in the movie practices kindness and acceptance to both Palestinians and Israelis, the documentary believes working together with love and forgiveness could bring unity, movie’s lead figure learns to “overcome enemies” by loving them, and, although the documentary discusses Islam and American political beliefs about Palestine, it only provides information about the history without trying to persuade the viewer to adopt political beliefs about Israel and Palestine
Foul Language:
No foul language but a BS obscenity is bleeped out
Violence:
Some very strong and strong violence includes some graphic videos and images, bombs, fires, dead bodies, bloody bodies, fights by soldiers, gun shots, suicide bombers, stabbings, car crashes, and pictures of dead bodies from the Holocaust
Sex:
No sex
Nudity:
Children are shown naked walking down the street
Alcohol Use:
Adults drink alcohol
Smoking and/or Drug Use and Abuse:
Adults smoke tobacco, but no drugs; and,
Miscellaneous Immorality:
Some inciting of violence but it’s not supported by the movie itself.

HOPE IN THE HOLY LAND is a documentary streaming on SalemNOW following an American Christian named Todd Morehead as he seeks to learn more about the Palestinian-Israeli conflict through understanding the different perspectives within the Holy Land. HOPE IN THE HOLY LAND provides a thoughtful approach on a deep rooted and complex topic through extensive research and interviews of both Israeli and Palestinian citizens. While the documentary includes scenes with graphic violence, the images serve a purpose to illustrate the turmoil in the Holy Land. Despite the violent clips, HOPE IN THE HOLY LAND encourages viewers to love their enemy and to acknowledge the viewpoints of both sides.

The documentary HOPE IN THE HOLY LAND shows Todd Morehead leading a Bible study at his hometown church in California. Todd wants to travel to the Holy Land to gain a better understanding of the Israeli-Palestinian conflict. Todd believes he can’t understand this complex situation without stepping into it and learning the full truth beyond what’s portrayed in the mainstream media.

HOPE IN THE HOLY LAND dives into the deep history of the Holy Land and how many empires conquered and lost the land. This resulted in a diverse mix of ethnic and social backgrounds. At present, there are more than seven million Palestinian refugees, and 300,000 remain unemployed. There is a deep-rooted resentment and hostility between Palestinians and Israelis because many Palestinians worked with the Nazis and supported their death camps against the Jews and Arabs. Then, in 1948, when the United Nations voted to create a Jewish state and an Arab state in the British territory of Palestine, Arabs there attacked the Jews and their government and refused to accept their own state, but they lost the war and Israel was formed.

Todd has difficulty understanding the Palestinian rejection of Scripture, which says that the Jewish people own the Holy Land. Todd delves into the Palestinian liberation theology which supports social justice and resistance. Todd notes that Jesus lived under Roman occupation during his life on Earth.

Todd learns that many Palestinians greatly distinguish between Jews and Zionists. The Palestinians feel a greater hatred towards Zionists for causing them to be refugees. Todd discovers that many conspiracies are taught in the community such as the Holocaust being fake, and the Jews carrying out the 9/11 terrorist attacks. He comes to realize that the problem lies in the political situation, because many of the donations going toward the Palestinians are going to a small number of tyrannical Palestinian leaders. The Palestinians remain victims to their leaders because the donations aren’t helping poor Palestinian communities. Also, those who speak out against this situation are tortured.

While Todd feels hopeless about the absence of Jesus Christ’s presence in the Holy Land, his heart becomes hopeful again as he learns about many local businesses where Palestinians and Israelis coexist. He believes that, when enemies work together, it breaks the walls between them. Todd speaks out about the dangers and misconceptions about the Palestinian-led movement to encourage people around the world to stop supporting Israel and investing in the country and its businesses.

Toward the end of his journey, it’s apparent that God has changed Todd’s heart. He understands the strong connection that Jews feel towards the land and the oppressive regime that the Palestinians live under their own Palestinian leaders in the West Bank and the Gaza Strip. Todd learns that the only way to overcome one’s enemy is by loving them. While remaining true to his beliefs that Jews should have a recognized nation, Todd understands the suffering Palestinians face and prays that a solution can be reached through education, work, and a recognition of humanity. The documentary ends on a quote saying, “The only way to overcome our enemy is by loving him.”

HOPE IN THE HOLY LAND approaches a complicated conflict with compassion using a Christian lens. The documentary is extremely engaging as Israelis and Palestinians share their thoughts about the conflict and what they learned while growing up. The movie also dives into the history of the Holy Land, and how many empires have ruled the Holy Land, which resulted in diverse ethnic and social backgrounds among the population over the years.

Of course, Christian Palestinians have lived in the Holy Land since the time of Jesus Chirst, and were the majority even up to the 1960s. They have been oppressed by both the Jews and the Muslims. Often, they are the nurses and caregivers who help both sides.

While the HOPE IN THE HOLY LAND includes scenes with graphic violence, the images serve a purpose, to illustrate the turmoil in the Holy Land. Some scenes include bombs, fires, massacres, bloody bodies, stabbings, fights, and images from the Holocaust. However, the main message of HOPE IN THE HOLY LAND promotes love for our enemies and hope that the Israeli-Palestinian conflict will one day be resolved. MOVIEGUIDE® advises extreme caution for the stronger violent images in HOPE IN THE HOLY LAND.

Watch HOPE IN THE HOLY LAND: