LIFE AND NOTHING BUT 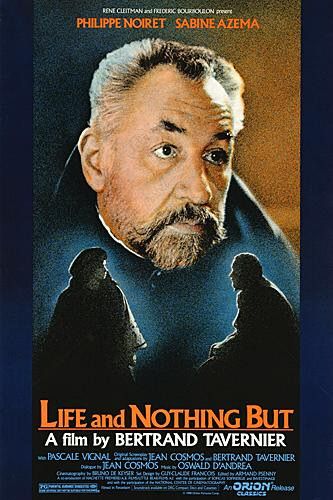 LIFE AND NOTHING BUT is a rather slow-moving, but provocative romantic war drama about a World War I French officer who helps two women search for their loved one despite the devastation that surrounds them.

The setting is in and around the fields of Verdun, and the time is after the last battle of World War I has been fought. It’s a time when the fields are still soaked in blood, when the plow still turns up shells that blow the plowman to bits.

Forlorn relatives search the coastal towns of France for their missing loved ones. Irene, a petulant aristocrat, has borrowed her father-in-law’s chauffeur driven car to check the temporary hospitals for her missing husband. Alice, a schoolteacher forced back into waitressing by circumstances, is looking for the same man.

While searching for her unfaithful husband, Irene encounters Dallaphane, a cynical, battle-weary army colonel who has the sad task of both enumerating and, if possible, identifying the corpses of soldiers, as well as the war’s amnesia victims. They clash at first, for he is irritated by Irene’s impatience and her smug assumption that his men should drop everything just to tend to her request to check out the wartime death of her husband.

However, there’s a spark of electricity between them. The aging French officer, long convinced he is immune to such emotions, is jolted by feelings of jealously when he overhears Irene talking to another man. Irene eventually gives Dallaphane an ultimatum urging him to declare his feelings for her.

The film continues with its imagery, measuring the impact of war on the landscape, the political bureaucracy and the emotions of the survivors, as Dallaphane emerges from a tunnel now filled with new corpses. At one point, Irene rails, “All humans should be against God. How can God allow this?”

Though there’s a certain richness to the film and a feel of the camera on the people living there, LIFE AND NOTHING BUT unfortunately makes a mistake in saying that God is somehow responsible for pain, when, in fact, it is the sinfulness of man which leads to the sufferings of war:

“What causes fights and quarrels among you? Don’t they come from your desires that battle within you?”