"Delightful Animated Series with a Solid Sense of Right and Wrong" 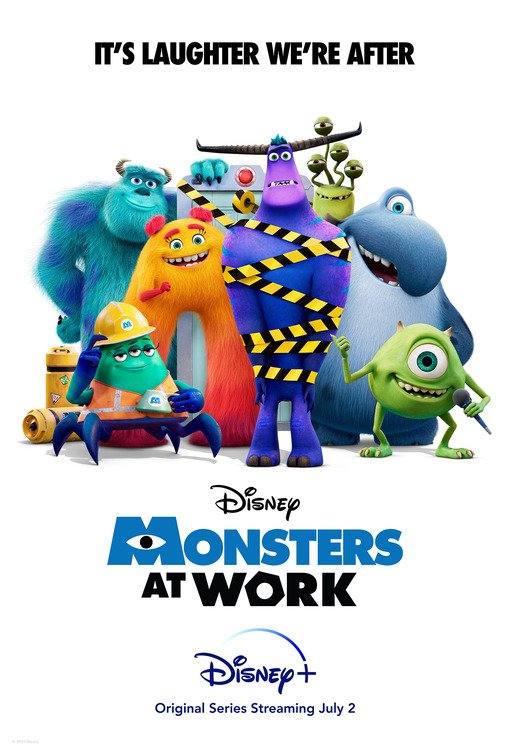 MONSTERS AT WORK is a new animated comedy series on Disney Plus about dealing with life on the job in the world of Monstropolis. Tyler Tuskman, a recent graduate of the scaring school at Monsters University, starts work at Monsters, Inc. However, he discovers that, instead of scarers to create energy, they’re now using laughter. They send Tyler to work with a weird group of misfits in the Monsters Inc. Facilities Team or MIFT. Tyler must learn to work with others while he trains to be a jokester for the Laugh Floor. Meanwhile, Mike and Sully learn the difficulties of leadership and running a company.

The themes of MONSTERS AT WORK include dealing with the challenges life brings, not judging others by first impressions, running a business, and upholding dignity and honor. Many episodes involve the main characters learning from their mistakes and fixing them. There’s little to no objectionable content in MONSTERS AT WORK. The worst issues are a few insults between coworkers and some slapstick comedy. Altogether, MONSTERS AT WORK is a delightful program with lots of wholesome family fun.

(BBB, CapCapCap, V, M):
Dominant Worldview and Other Worldview Content/Elements:
Very strong moral worldview with biblical themes includes being kind to others, working through the difficulties and uncertainties of life with dignity and honor, any form of rule breaking or sinful action is met with negative repercussions, and there is a clear sense good versus evil and moral versus immoral, with very strong pro-capitalist elements
Foul Language:
No obscenities or profanities, but one main character does call his students morons for not understanding knock-knock jokes
Violence:
Some slapstick cartoon violence usually caused by accidents
Sex:
No sex
Nudity:
No nudity
Alcohol Use:
No alcohol use
Smoking and/or Drug Use and Abuse:
No smoking or drugs; and,
Miscellaneous Immorality:
A character mentions a “shock-ra” yoga class in one episode, and there are some times where characters end up lying and/or breaking the rules, but there are almost always negative repercussions, with the character having to make it right (for example, Tyler lies to his friends about the bowling tournament, but he sets things right).

OVERVIEW REVIEW: MONSTERS AT WORK is a wonderful continuation in Pixar’s MONSTERS series. Streaming on Disney+, the program returns to the end of MONSTERS, INC. with James P. Sullivan and Mike Wazowski taking over the scream powered factory and changing the lives of the monster’s world from relying on scream power to relying on the power of laughter. The program shines a much-needed light on how our decisions greatly affect others around us, all with the scenery of a fantastical workplace.

Each episode of MONSTERS AT WORK has a two-part storyline.

The first storyline follows recent graduate Tyler Tuskman as he comes into his supposed first day of work. When Tyler arrives at Monsters, Inc., he discovers they’re no longer hiring scarers. Instead, they’re now hiring jokesters. This causes a problem for Tyler because he went to Monsters University for scaring people and, now, he has no job and a useless degree. To make up for Tyler’s lack of a job he’s reassigned to the facilities team or MIFT, where he has some wacky adventures with his coworkers as well as opportunities to learn and grow within the company.

The second storyline follows the familiar characters of Sully and Mike as they take over the company and must now run it as CEOs. Now being in charge, Mike and Sully must deal with all the problems of running a company including inspections, accidents in the factory, changing company policies, and keeping morale high. Through Sully’s business sense and experience, and Mike’s entrepreneurial thinking, they both manage to take the dying factory of Monsters, Inc. and revitalize it. In addition, Mike teaches a Comedy/Jokester class to get more jokesters trained to replace the scarers.

Unlike its predecessors, MONSTERS AT WORK doesn’t focus on the need to face fear with laughter (MONSTERS, INC.) or finding new ways to accomplish your dreams and goals (MONSTERS UNIVERSITY). Instead, the program is about dealing with life as it comes to you. For example, the main protagonist, Tyler had goals and a plan for life, and now, there is no longer need for the job, he is trained for so like many college graduates nowadays, he finds himself with a useless degree. This doesn’t mean that he himself is hopeless. He now must learn new skills and lessons to help further his career, including how to repair certain parts of the factory from his current position, and learning to be a jokester from Mike. Mike and Sully didn’t ask to become CEOs, but that is what life gave to them, and they now must make the best of it to ensure the company runs smoothly. Another overarching theme is learning to accept people as they are and not to judge people before getting to know them. When Tyler first joins the MIFT staff, he’s not so eager, and he finds them all to be rather strange and weird. Over time and each episode, Tyler gets to know his boss and coworkers more and starts valuing his coworkers’ eccentricities even more.

The show has very few problem areas. The most glaring issue is the slapstick violence. In most of the episodes, the slapstick violence is used for comedic purposes and is usually accidental. There are no obscenities or profanities, although Mike does call a few people morons when they don’t understand how a knock-knock joke works. Overall, however, MONSTERS AT WORK is a fun, family-friendly show with a good premise and mostly appropriate content.