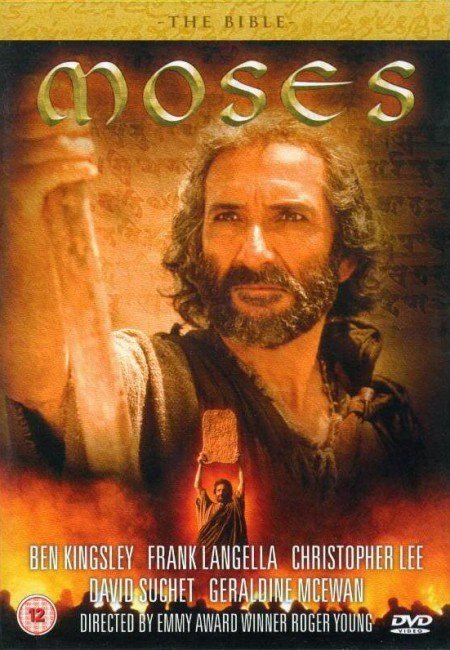 MOSES is a dramatized version of the biblical narrative depicting the life of Moses, the exodus from Egypt, and the wanderings of the Hebrews in the wilderness. Moses is saved from death as an infant when his mother places him in a basket on the Nile River to hide him from Egyptian soldiers. The Pharaoh’s daughter discovers the young infant and takes him in as her own adopted son. However, Moses discovers he’s Jewish, so eventually he is exiled when he kills an Egyptian guard in anger. As the years pass, God calls Moses to tell Pharaoh to “Let my people go.”

Remastered from a 1995 TV movie, MOSES is well made for its time. Though the plot drags at various points, the acting on the part of Ben Kingsley as Moses does a good job holding everything together. The movie is tasteful in its depictions of violence. However, there’s a significant amount of death and violence scattered throughout the movie, making it unsuitable for younger children. That said, MOSES is an inspiring production that’s true to the biblical account.

(CCC, BBB, Pa, VV, N, AA, M); Very strong Christian worldview which emphasizes the values of obedience, humility, respect for authority and love of family, faithfulness, love of God’s Word, and trust in God, plus movie generally remains faithful to the biblical narrative of the life of Moses, the Exodus and the wilderness wanderings of the Israelites found in Scripture and depicts the value of prayer, obedience to the will of God, and trust in the Lord, with light pagan worldview elements with the worship of false gods and the creation of an idol; no foul language; medium level of violence with a baby is thrown into a river to drown, animal sacrifices, and men beaten, stabbed and stoned to death; no sex; upper male nudity as several men are shown in only short loincloths; light drinking as wine is served at many meals, and men and women are shown to be drunk during one festival; no smoking or drug use; and, anger, lying, rebellion.

MOSES is a dramatized version of the Old Testament narrative depicting the life of Moses, the Israelite exodus from Egypt, and the wanderings of the Israelite people in the wilderness.

MOSES begins abruptly with a Hebrew woman in labor who is giving birth to a son. Egyptian soldiers are shown snatching the child from its mother’s arms only to carry it to the bank of the Nile where they cast the child into the river. A pregnant Hebrew woman, Jochebed, witnesses this event and thus, when her son, Moses, is born, Jochebed takes him and places him in a basket, setting it afloat on the Nile to try to keep her son safe from the Egyptian soldiers. The Pharaoh’s own daughter finds the basket and rescues Moses, adopting him as her own son.

The Egyptian court reviles Moses as they know of his Hebrew roots, and Moses struggles throughout his youth with trying to determine who he is and what god he should serve. When Moses sees an Egyptian guard attacking his Hebrew brother, Aaron, Moses lashes out in anger and kills the guard. Afraid for his life, Moses then flees Egypt and wanders to the land of Midian where he is taken in by Jethro the priest and marries Jethro’s daughter, Zipporah. While tending a flock in the mountains near Midian, Moses discovers a burning bush, and the voice of God speaks to him from the bush commanding him to return to the land of Egypt as God’s spokesman to free the Israelite people.

Moses obeys and returns to Egypt where he and his brother Aaron go before the Pharaoh to demand that he let the Israelites go free. Pharaoh refuses and God brings ten tremendous plagues on Egypt, culminating in the death of all the Egyptians’ firstborn sons. Devastated, the proud Pharaoh agrees to free the Israelite people, and they leave Egypt to journey toward the land God promises to give to them.

Their journey takes them through the Red Sea and into the wilderness where tests and trials await them. The Israelite people constantly grumble against Moses and the will of the Lord, and therefore, they are forced to endure many hardships. The Lord also shows great kindnesses to them by providing miraculously for their physical needs, by giving them manna from heaven and water from a rock, and by providing for their spiritual needs by giving them Moses as a representative between God and man.

Will the Israelites reach their Promised Land and possess it by faith? Or, will their grumblings and lack of trust bar them from the land forever?

MOSES is well made for its time. Though the plot drags at various points, the acting on the part of Ben Kingsley as Moses does a good job of holding everything together. The movie is tasteful in regards to its depictions of violence by showing the historical death and bloodshed without being graphic. However, there is a significant amount of death and violence scattered throughout the movie, thus making MOSES unsuitable for younger children and cautioned for older children. That said, MOSES is an inspiriting production that’s true to the biblical account.