"Lonely Tale of a Sinful Man" 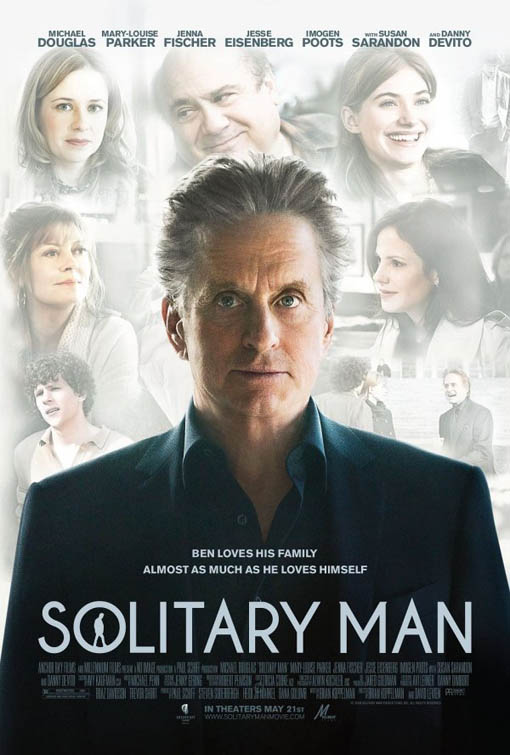 SOLITARY MAN stars Michael Douglas as Ben Kalmen. Ben once was happily married, with a loving daughter and an adoring grandson. Then, he received a doctor’s report that he had a heart condition. Ben decided not to fear the future but instead to live for each and every moment, which drove him to cheat on his wife and make illegal business decisions. Now in his late fifties, Ben has no money and no meaningful relationships. He goes from bar to bar and bed to bed, living for the moment. Meanwhile, his daughter and ex-wife try to convince him to come home and cease his degenerate ways. Ultimately, Ben must decide if he wants to save his future and his family, or continue to live as a solitary man.

SOLITARY MAN is not that interesting. It is poorly structured and not very engaging. Ben is immoral, self-indulgent and despicable. The movie has a strong humanist worldview with abhorrent sexual content, plenty of strong foul language, underage drinking, and some violence. With a static storyline and immoral content, media-wise audiences would be well advised to leave this SOLITARY MAN all alone.

(HHH, B, LLL, V, SS, N, AA, D, MM) Very strong humanist worldview with immoral character who only lives to indulge his base desires along with a positive, moral element including daughter of main character implores her father to give up his destructive lifestyle and return to his family; 32 obscenities and two profanities; violence includes man getting punched and beaten up by hired thug who hospitalizes man with broken ribs; sexuality includes man discusses having adulterous affairs on his wife, 60-year-old man has sex with the 18-year-old daughter of his 40-year-old girlfriend, graphic sexual dialogue with 18-year-old, unmarried kissing, man gropes woman’s breast, implied fornication with several women, college-age youth discuss their sexual relationships; nudity includes bare female back with side cleavage and underwear, upper male nudity and woman’s upper thigh; strong alcohol use includes underage drinking in several college party scenes, and drunkenness depicted in multiple scenes; cigarette smoking; and, lying, girl has fake ID, revenge, blackmail, discussions of corrupt business dealings.

SOLITARY MAN is the story of Ben Kalmen (played by Michael Douglas), a down-on-his-luck, aging businessman. Ben’s poor business decisions and immoral personal choices over the past few years have led him down a path of self-destruction, leaving him a lonely, solitary man.

Six and a half years ago, Ben Kalmen was on the cover of FORBES Magazine, hailed as “New York’s Most Honest Car Salesman.” He was on top of the world, happily married to his college sweetheart, with a loving daughter and an adoring grandson. Then, he received a doctor’s report that he had a heart condition, but Ben never waited around to hear the report. He left the doctor’s office, having decided that instead of worrying about the future, he would now live for each and every moment.

That decision led him to cheat on his wife: multiple times with multiple women. It also led him to make some underhanded and illegal business choices, which in turn, caused him to lose all his car dealerships.

Now in his late fifties, Ben is without home, without money, and without any meaningful relationships. He goes from bar to bar and bed to bed, living for each and every moment with no thought of the future. Ben even decides to seduce and sleep with the 18-year-old daughter of his rich girlfriend, who is trying to help him get financing to open a new dealership.

When his girlfriend throws him out, Ben decides to head back to his old college town where he met his wife forty years ago. He takes a job in a local diner and tries to relive his college days, hanging out with the local students and seducing more young women.

Ben’s daughter and ex-wife try and convince him to come home and cease his philandering ways. However, ultimately, it is Ben who must decide if he wants to save his future with his family or continue to live in the present as a solitary man.

SOLITARY MAN is not that good. It is poorly structured and not very engaging; mostly because Ben’s character is unlikeable. He is immoral, self-indulgent and despicable. These traits might be understandable if the character were dynamic and changed throughout the story, but Ben doesn’t change. He is static and unwavering in his sinful vices. [[SPOILER WARNING]] Even in the final shot of the movie, Ben is left standing there, deciding if he will get in the car with his aging, ex-wife, who wants to mend their relationship, or if he will chase after a gorgeous 20-year-old who just passed by them. The audience is never privy to his decision as the director fades to black, leaving viewers wondering if this despicable human being will try and make amends or if he will continue down his path of self-destruction.

The movie’s strong humanist worldview also contains abhorrent sexual content. There are several scenes of graphic sexual dialogue that Ben has with teenage women. There are several scenes of implied fornication, unmarried kissing, and Ben groping an 18-year-old. The movie also contains 32 obscenities and two profanities as well as some violence. With a static storyline and all of the immoral content, media-wise audiences would be well advised to leave this SOLITARY MAN all alone.