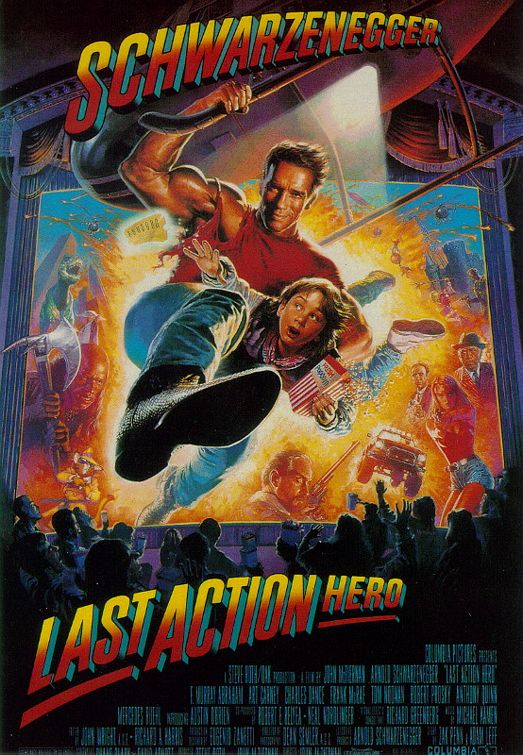 Arnold Schwarzenegger plays the action-movie idol of young Austin O'Brien, who is able to join his hero's on-screen adventures in THE LAST ACTION HERO. Although imaginative and sometimes amusing, THE LAST ACTION HERO is not exactly a family film and contains excessive violence, a complicated plot and satire, and several obscenities.

(H, B, LL, N, S, M, VVV) Humanistic worldview which inadvertently emphasizes some biblical principles; Over 10 obscenities & 3 profanities; scantily glad women; sexual innuendo; political satire; and, excessive, non-stop violence (although mostly without blood & gore). However, Arnold Schwarzenegger's character does say, "God save me from all of this."

Danny Madigan (Austin O’Brien) idolizes fictional action hero Jack Slater (Arnold Schwarzenegger), and even skips school to see his movies. When an eccentric theater owner (Art Carney) gives Danny a mysterious ticket that magically transports him into the latest Jack Slater adventure film, Danny finds himself in the middle of a make-believe world where the good guys always win and all the women are gorgeous. In this movie-within-a-movie, Danny pairs up with L.A. cop Slater to find the killer of Slater’s favorite second cousin. However, Danny and Slater soon have to cross over into the real world to catch the villain.

In the Jack Slater film, people are beaten, shot, blown up, set afire, and stabbed. The violence isn’t graphic–no one actually sheds blood–but it is continuous. Violence is treated casually in the movie-within-a-movie and has no consequences, but when Jack and Danny step into real life, violence causes real suffering. One of the most troubling features of this movie is that Danny, only eleven years old, uses a gun in both the Jack Slater film and in reality. Although he never actually shoots anyone, he does discover that waving a gun around gets results. Besides the violence, LAST ACTION HERO also contains a moderate amount of obscenities, including one instance of the “f-word.” Although imaginative and sometimes amusing, LAST ACTION HERO is not a family film.