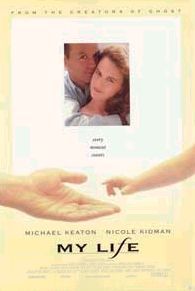 MY LIFE is the story of a man caught up in the fast lane of life, who because of a terminal illness, is forced to take a close look at himself. This is an excellent movie with good moral content, although the lead characters are not Christian. However, Bob's illness provides him the opportunity to see what earthly joy is all about.

(L, B, NA) 6 obscenities & no profanities, but otherwise an excellent movie with good moral content, although the lead characters are not Christian, and they do not turn to God in their crisis other than to pray two brief prayers and there is a New Age aspect to the movie.

MY LIFE is a heart-warming story that will touch the heart of anyone who has experienced the tragedy of cancer. The movie portrays the struggles Bob and his family encounter when he discovers he has kidney cancer. His is the typical American success story with a successful business, a big house, a wonderful wife, and the awaited birth of their first child. However, Bob is not content. Discovering that he has a terminal illness, he starts to videotape his life for his unborn child. While he does this, he is forced to take a close look at himself. We are taken on a trip in which he tries to tell his yet-to-be-born son the so-called “facts of life,” how to play basketball and a host of things that a father longs to share with his son. The most difficult part of his life is his relationship with his parents. As he tries to mend his relationship with his parents, however, he finally discovers himself. As he slows down to take a close look at himself, he finds tranquility and is able to enjoy what he already possesses.

Although the lead characters are not Christian, MY LIFE is an excellent movie with good moral content. Although they do not turn to Jesus Christ in their crisis, they do offer up two brief prayers. The terminal illness and subsequent videotaping of his life cause Bob to put his life in perspective, and the audience is forced to do the same through the film portrayal of Bob’s life.

Rent or Buy MY LIFE: