MY LITTLE PONY: A NEW GENERATION

"Love and Friendship Are the Real Magic" 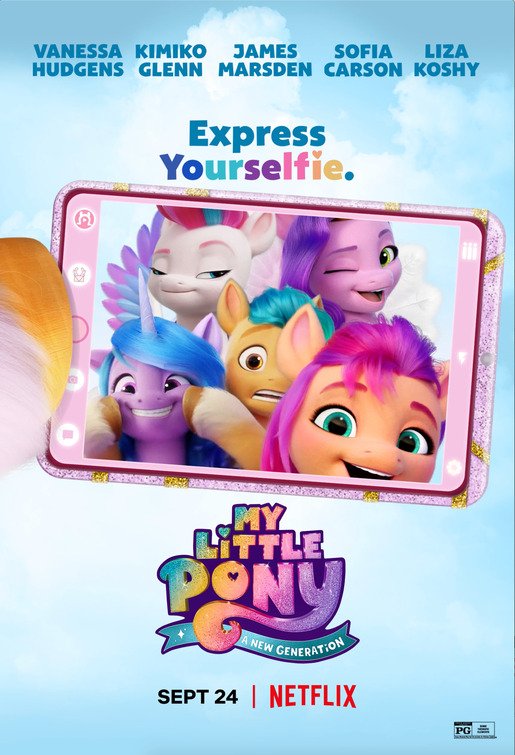 MY LITTLE PONY: A NEW GENERATION is a new take on the My Little Pony franchise. In this movie, which is streaming on Netflix, earth pony Sunny wants to change her world for the better and establish friendly relations with unicorn and Pegasus ponies. Despite the resistance of her own people, Sunny befriends a unicorn named Izzy and a Pegasus named Zipp. They become good friends and learn that all the prejudices and rumors they heard are lies based on a prejudice born from fear and ignorance. They think three crystals will return magic to their world, but they learn that love and friendship are the real magic.

MY LITTLE PONY: A NEW GENERATION has lots of fun adventure and comedy. The animation is bright and colorful. The voice acting makes the characters come alive. The movie’s worldview has strong Christian values, though it doesn’t mention Jesus. For example, it stresses love, friendship, kindness, compassion, peace, and understanding. MY LITTLE PONY: A NEW GENERATION is a cute, positive animated story suitable for all ages, but it has some light cartoon violence and jeopardy.

(CC, BBB, ACAC, V, M):
Dominant Worldview and Other Worldview Content/Elements:
Strong Christian worldview with very strong moral values stresses that love and friendship (or fellowship) are the real magic and also promotes kindness, compassion, peace, and understanding and overcoming bigotry and prejudice, plus the main character has a strong relationship with her father, and the villain gets a big head, establishes total control of his town and wants to wage war against two other groups, but he’s overcome by love and friendship, and an older female character uses her company to take advantage of the fear, bigotry and ignorance in her town, but she eventually realizes the power of love and friendship
Foul Language:
No foul language
Violence:
Light cartoon violence and jeopardy such as being chased, being arrested and thrown into a dungeon, characters try to avoid a large machine that splatters people with sticky jelly and tries to destroy the lighthouse where the main hero lives, and people hang from the lighthouse tower as its being destroyed
Sex:
No sex
Nudity:
No nudity
Alcohol Use:
No actual alcohol use, but there is a joke about a bar scene where characters drink tea
Smoking and/or Drug Use and Abuse:
No smoking or drugs; and,
Miscellaneous Immorality:
The Pegasus royals in the beginning lie about their ability to fly, but one princess speaks out against it saying it’s wrong, and she turns out to be right, plus there’s an example of gambling happening between two characters.

Taking place hundred of years later within the world of Equestria, magic has disappeared, and the society of the ponies has changed drastically. They’ve split into three races of ponies, the earth ponies, the unicorns and the winged Pegasi. They all blame each other for the lost magic, separated based on race, and turned the world of friendship into one of bigotry and prejudice. In Maretown, however, an earth pony named Sunny has been taught by her father not to hate the unicorns or the Pegasus ponies. They rebuff the awful stories about them.

Years later, Sunny is still preaching her father’s message of love and friendship, but the other earth ponies will hear nothing of it. They’ve made her a pariah.

One day, however, a young unicorn named Izzy arrives and causes a panic. The other ponies think Izzy is going to zap them with her horn. Sunny decides to team up with Izzy to see if they can restore magic to the world. Along the way, Izzy and Sunny acquire a few other friends for their journey, including two princesses form the Pegasus town and Sheriff Hitch, Sunny’s childhood friend who’s chasing Sunny to bring her back to Maretown. As the group of friends explore their world, they learn that all the prejudices the three races have for one another are all wrong, and the true magic is love, friendship and understanding. However, Sheriff Hitch left his conceited deputy, Sprout, in charge of Maretown, and he’s preparing the town to wage war against the other two pony races.

The computer animation in MY LITTLE PONY: A NEW GENERATION is visually pleasing and colorful. The animation is clear and bright perfect for the imagination of a child. The music is also good, both the background music and the musical numbers. To top it all off, the voice acting is on point, creating wonderfully unique characters.

A NEW GENERATION has lots of fun adventure and comedy, with a positive message at the story’s center. Although the good guys go out of their way to return magic to the world, they discover that prejudice and hate divided the ponies in Equestria, but that love and friendship can bring them all back together. Sunny and her new friends think that three crystals will return magic to Equestria and bring everyone together, but they crystals end up not working. Instead, they learn that love and friendship are the real magic. This is a very Christian, moral message for a children’s movie to have. Compassion and love of neighbor are two of the core Christian teachings, so the movies positive messages will be a good influence on the movie’s target audience of young children.

Some leftist critics and reporters in the mainstream media have picked up on the movie’s message against prejudice and extended it to today’s debate against alleged “systemic prejudice” in America, especially among white people. Also, Deputy Sprout’s warmongering is depicted as very militaristic. However, in the story, all three races of ponies have become prejudiced. Also, the opposition to Deputy Sprout’s militarism in the movie can be seen as an anti-totalitarian message exposing all kinds of military dictatorships, including socialist, communist ones like Castro’s Cuba and Communist China. There is some fantasy, cartoon violence and jeopardy in A NEW GENERATION, however. They earn the movie a PG rating.

Overall, MY LITTLE PONY: A NEW GENERATION is a cute, positive animated story suitable for all ages.