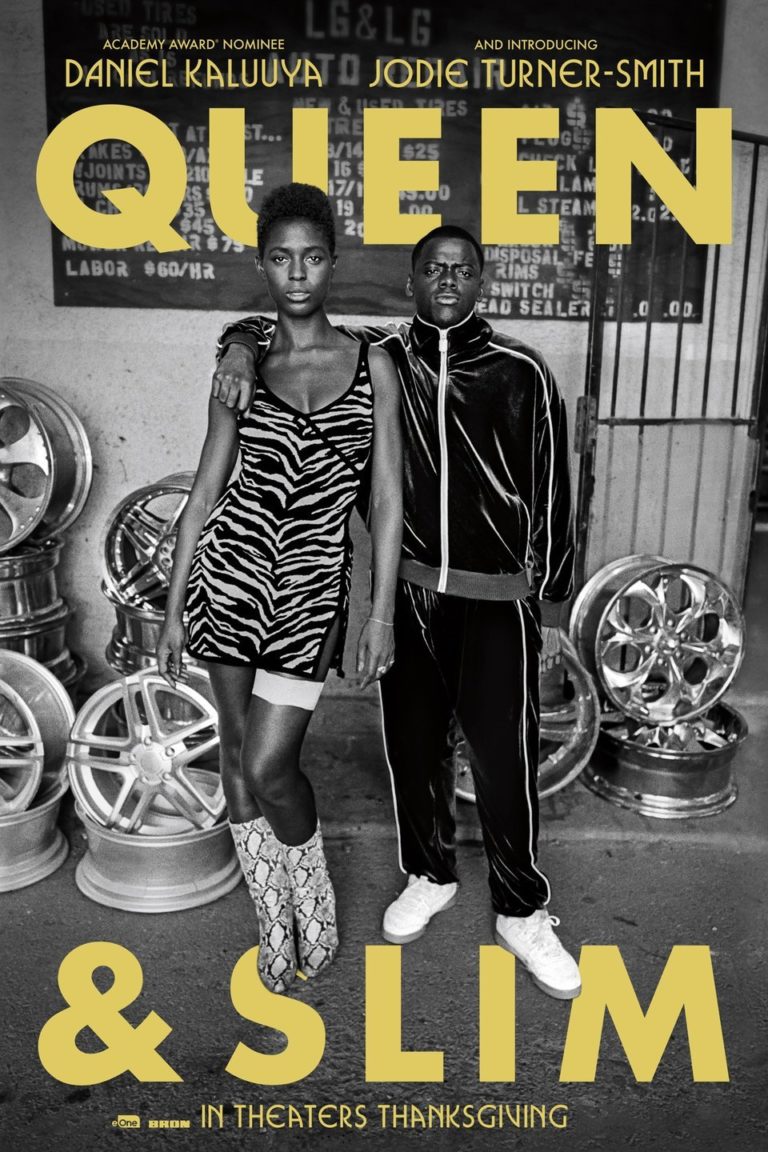 QUEEN & SLIM is about a black couple who encounter serious problems on their first date. Slim prays before his meal and wears a cross. Queen’s a high-strung atheist lawyer and activist. The devout Slim acts surprised when Queen becomes annoyed that he expects sex. As they bicker in the car, it swerves, and a white cop stops them. An apparent racist, the cop thinks Queen’s reaching for a gun instead of her cellphone. He shoots her in the leg, Slim fights the cop for his gun, and the cop is killed. Queen and Slim go on the run and become a cause célèbre.

QUEEN & SLIM is filled with bad writing, terrible logic, and unlikeable characters who contradict themselves. The Christian character behaves like a pagan, and the atheist character says a prayer, then asserts she’s an atheist. At 132 minutes, the movie is vastly overlong. Endless driving montages and numerous dialogue scenes go nowhere because the couple has little in common. QUEEN & SLIM has a strong Romantic, pagan worldview with extreme political correctness and strong objectionable, abhorrent content.

(RoRoRo, PaPaPa, PCPCPC, APAPAP, C, HHH, AbAbAb, LLL, VVV, SSS, NN, AAA, DD, MMM):
Dominant Worldview and Other Worldview Content/Elements:
Very strong Romantic, pagan, politically correct, leftist, Anti-American worldview depicting the justice system and police as racists and glorifies criminality where the man is supposed to be a Christian but immediately wants sex from an atheist woman on their first date together, and the atheist woman prays at one point but still asserts that she’s an atheist, where the couple goes on the run after tussling with a police officer and killing him
Foul Language:
At least 117 obscenities (including many “f” words), several strong profanities and some “n” words
Violence:
Some very strong, strong and light violence includes man resists arrest and gets in a fight with a policeman, man finally shoots cop in self-defense after the officer shoots the woman he’s with in the leg, couple on the run steals a truck from a helpful off-duty sheriff after taking him hostage and stuffing him in the locked trunk of their car, couple steals gas from others at gunpoint, a man points a gun at another man in a long tense moment and making him believe he’ll get shot before the man puts the gun down and says he was just joking, a violent anti-police riot breaks out and a young black man dares a policeman to shoot him before he gets shot dead himself, a man slaps a woman a couple of times with great force, and two characters are shot by an army of police with great graphic bloodshed
Sex:
Extremely graphic fornication sex scene in a car’s front seat between the main couple occurs, mixed with footage of the violent riot in an incredibly irresponsible mix of visuals, a side character lives with prostitutes, and extremely sensual dancing is seen throughout an extended bar scene
Nudity:
Depicted sexual nudity with upper and rear male and female nudity in lengthy sex scene but no genitals and scantily clad women in some scenes
Alcohol Use:
A long bar scene is full of excessive drinking by many patrons
Smoking and/or Drug Use and Abuse:
No tobacco use but three characters share a marijuana cigarette, with two of the characters doing so just moments after saying they don’t smoke marijuana; and,
Miscellaneous Immorality:
Very strong miscellaneous immorality includes stealing, resisting arrest, much deception used by the criminal couple and those who support them, and they are made heroes by the black community everywhere they go for shooting a racist policeman, but the anger spills over against innocent cops, including even a black one who gets shot dead, and the criminal couple plans to go to Cuba as their ultimate escape since it harbored Black Panther radicals in the past, thus glorifying that violent group.

QUEEN & SLIM follows the story of a black man and woman who go on the run after the man shoots a police officer in self-defense. Very poorly made and contradictory, QUEEN & SLIM has a thoroughly Romantic, pagan worldview with extreme political correctness and lots of strong objectionable, immoral, abhorrent content.

The movie opens on a dinner date in a cheap diner between Slim (Daniel Kaluuya) and Queen (Jodie Turner-Smith), who met on the shallow dating app Tinder. They appear to be a bad match beyond their looks. Slim’s a soft-spoken friendly guy who prays before his meal, wears a cross and has a pro-God license plate on his car, while Queen is a high-strung atheist and a lawyer who just lost a client to execution and is bitter about the justice system.

The movie quickly lapses into bad logic and contradictions, as the seemingly devout Slim acts surprised when Queen is annoyed that he seems to be expecting sex that night. As they bicker a bit, he reaches to get his cellphone back from her and swerves his car, leading a white cop to pull them over.

The policeman appears to be racist as he escalates the situation into checking Slim’s trunk, which is loaded with shoes he’s apparently trying to sell for a living. When Queen steps out of the car and reaches for her cellphone to call a friend and complain about their stop, the officer assumes she has a gun and shoots her in the leg.

Slim wrestles with the officer and ultimately grabs his dislodged gun, shooting him in terrified self-defense. Panicked, the two decide to drive across several states to her Uncle Earl (Bokeem Woodbine), a troubled Iraq War veteran who accidentally killed his sister and her mom in an argument over who would inherit the house where he now lives.

Queen had saved Uncle Earl from prison at the time and now asks to stay in his house for a few days with Slim while they figure out an ultimate plan. Before they can get to Uncle Earl, however, they steal a truck from an off-duty sheriff who was helping them after they ran out of gas until he saw them on the news from the dashboard camera footage of the officer who was shot. They lock him in Slim’s car trunk before abandoning the car.

Once at Uncle Earl’s, Earl argues with the various prostitutes living with him, but ultimately gives them a car, a lot of cash and tells them how to find a friend near Miami with a private plane to fly them to Cuba. Will Slim and Queen overcome their bickering and find love, and will they make it to Cuba?

QUEEN & SLIM is filled with bad writing, terrible logic, plot holes, and unlikeable characters who contradict themselves throughout the movie. Slim is a mild-mannered Christian in the opening minutes, yet nearly immediately seeks to fornicate with Queen. As they are on the run together, he pulls over into a roadside bar and they seduce each other with sensual dancing before having one of the most graphic sex scenes in memory the next day in Uncle Earl’s car.

That sex scene is interwoven with violent footage of an African-American march in support of Queen and Slim’s attempt to escape. The march breaks into a riot where a previously mild-mannered black teenage male taunts a black officer to shoot him before pulling out a gun and shooting the officer himself for no reason before acting shocked. It’s later revealed the boy was shot dead after that, though offscreen. However, the combination of sex and violence is one that many experts have pointed out is particularly damaging to viewers’ mindsets, and very irresponsible here.

The entire plan to fly to Cuba is ridiculously established. For example, Queen and Slim have nearly nothing in common yet within a day or so they’re willing to risk their lives and plan a lifetime relationship together.

At other points, Slim does some incredibly stupid things, such as letting a young white gas station attendant hold his only gun simply because the attendant offered to give him gas for free if he was allowed to hold it. The attendant holds the gun for a long time pointed at Slim, making him fear that the attendant will kill him before the young man laughs and hands the gun back to Slim.

There are similar inconsistencies throughout, making this one of the sloppiest movies to be released by a major studio in a long time. Some critics are praising QUEEN & SLIM, but it seems they’re overlooking its many fundamental flaws simply because it adopts an extremely politically correct, leftist viewpoint in turning this unbelievable couple into unabashed heroes.

At 132 minutes, the movie is vastly overlong, with seemingly endless driving montages and numerous dialogue scenes that go nowhere because the couple has so little in common to say to each other.

Perhaps worst of all is the movie’s portrayal of prayer. Queen adamantly notes she’s an atheist and mocks Slim’s enjoyment of Christian pop music, but she later delivers an extended prayer when they inexplicably are taken in by a white couple (Chloe Sevigny and Flea) simply because they’re friends of Earl – a fact that’s mentioned in such fleeting fashion it appears made up on the spot by the writer. The very next day, the couple have heated sex in Uncle Earl’s car, with Queen later repeating that she’s an atheist.

QUEEN & SLIM is overlong and badly written. It also has ugly messages and glamorizes criminality while engaging in a politically correct race-baiting story. It may be the year’s worst movie.