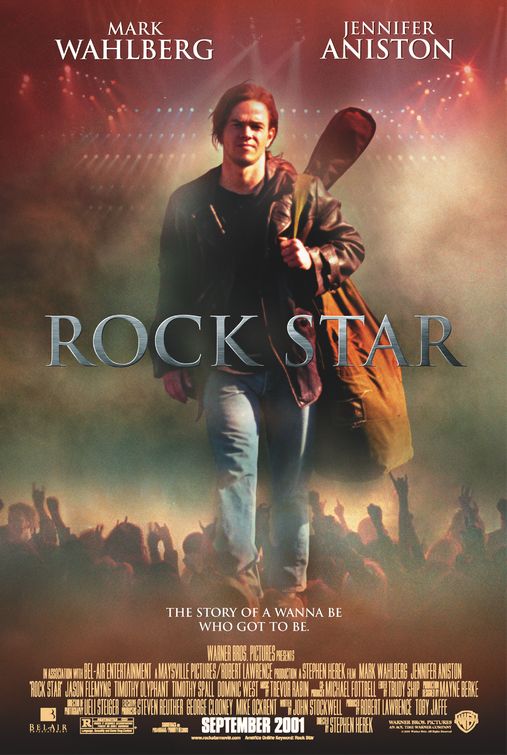 ROCK STAR stars Mark Wahlberg as Chris, a talented musician who wants to be a rock and roll star. He gets his chance with his favorite band, a heavy metal group called Steel Dragon. Before they can count to three, Chris and his girlfriend, Emily, played by Jennifer Aniston, find themselves thrust into the glitter and opulent decadence of big time rock and roll. At first, it is an incredible fantasy for them, but it slowly reveals its seamy and destructive underside. As they both become more and more immersed into this seductive new world, they find themselves spinning out of control in a dizzying whirlwind of music, sex, drugs, and everything in between.

ROCK STAR tries too hard to please a broader audience than it should, and in the end winds up being true to none. On a positive note, it is refreshing to see that first Emily, and then Chris, is able to finally recognize the bankruptcy and shallowness of the rock star’s world and decide to give it all up for a simpler lifestyle. Regrettably, this redemptive message gets lost in an ear-splitting haze of second rate rock music, sex, drugs, and alcohol abuse.

(PaPaPa, C, Ro, HoHo, LLL, VV, SSS, NN, AA, DD, M) Pagan worldview with redemptive message where the destructive lifestyle of rock & roll musicians is recognized & condemned, but in the context of a romantic notion about being your own person, with some solid pro homosexual elements & behavior; at least 60 obscenities & 10 profanities; solid violence including fist fighting, much vandalism of hotel furniture, wrecking musical equipment, & character fires shotgun at highway sign; orgy scene & groupies seek & have fornication with rock stars plus many other sexual references including homosexual ones; frontal female nudity & rear nudity; alcohol abuse; smoking & drug consumption; and, some miscellaneous immorality such as piercing & drag racing.

Turn up the volume and lower your expectations, because this new rendition of the standard rags to riches story, in leather and spandex that is, is just not able to hit that high note. Along the way the audience is treated in graphic detail to the human excesses of sex and drugs for which rock bands have come to be so notoriously known, and the sight is not pretty.

During the day, Chris Cole (Mark Wahlberg) works as a copy machine repairman and lives at home with his parents who are as typical a middle class family as can possibly be. At night, however, Chris becomes a leather clad rock and roll singer, black mascara and all. Chris idolizes the heavy metal band Steel Dragon, which is perennially at the top of the charts with its pulsating guitar licks and ear splitting raw lyrics. Chris’ band tries very hard to sound like Steel Dragon, but that is not good enough for Chris who wants them to imitate Steel Dragon down to the most minute nuances. The resulting tension finally tears the band apart, with Chris winding up as the odd man out.

With all his dreams and ambitions crumbling around him, Chris finds small comfort in his girlfriend Emily’s (Jennifer Aniston) encouragement. Emily reassures him of his capacity and talent to succeed on his own. It doesn’t take very long for Chris to be really convinced of a potentially bright future when out of the blue he gets a call from Kirk Cuddy (Dominic West), the leader of Steel Dragon. As it turns out, they have decided to jettison their lead singer, Bobby Beers (Jason Fleming), and they want to bring Chris to LA for a tryout.

Before the still unbelieving couple can count to three, Chris and Emily, like two young “ingenues” in a tempting but dangerous world, find themselves thrust into the glitter and opulent decadence of big time rock and roll. At first, it is for them an incredible fantasy, a dream that has become reality, but it slowly reveals its seamy and destructive underside. As they both become more and more immersed in this seductive new world, they find themselves spinning out of control in a dizzying whirlwind of music, sex, drugs, and everything in between, with their relationship the ultimate casualty in the go-all-out-until-you-burn-out culture of rock and roll. The question at that point painfully becomes, Where do we go from here? Of course, sometimes it is a long hard road to redemption.

ROCK STAR is occasionally reminiscent of Neil Diamond’s THE JAZZ SINGER and Prince’s PURPLE RAIN. For the few who don’t know the world of Rock and Roll bands, the movie may provide an interesting, if spotty, inside glimpse into the business. Others probably will want to save their time and money.

ROCK STAR tries too hard to please a broader audience than it should, and in the end winds up being true to none. Despite contributions by some big names in the music industry such as Jason Bonham, Sakk Wylde and Marilyn Manson, the rock musicians in the movie come across as rather wimpy and undernourished. The movie has too much heart for its own good. For example, Chris’ parents and brother, who happens to be a straight arrow police officer, happily attend and enjoy a Steel Dragon concert, and are later shown dancing at the band’s after concert bash while all around them groupies and rock star wannabes are tongue kissing and downing drugs like there is no tomorrow. Even lead singer Bobby Beers turns out to be a sensitive homosexual artist who will “survive” after being dumped unceremoniously from the band, in the end proving that this bubble gum meets heavy metal approach simply doesn’t mix. Thus, director Stephen Herek, responsible for the critically acclaimed MR. HOLLAND’S OPUS, attempts to make this niche film palatable to the widest possible audience, but only manages to turn the heavy metal music world into soft aluminum foil by getting too syrupy with the story and taking the edge off his characters. This results in a phony mishmash lacking realism and making ROCK STAR yet another Hollywood parody of the real thing.

On a positive note, it is refreshing to see that first Emily, and then Chris, are able to finally recognize the bankruptcy and shallowness of the rock star’s world and decide to give it all up for a simpler lifestyle. Regrettably, despite the likable characters portrayed by Mark Wahlberg and Jennifer Aniston, when the totally forgettable music which was written for the movie (apparently without any serious pride behind it) is added to the drug, sex and alcohol scenes, it really leaves little in ROCK STAR to recommend.