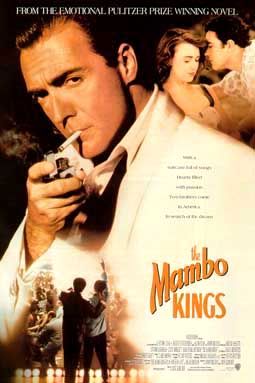 THE MAMBO KINGS captures the essence of 1950s New York as the Castillo brothers arrive fresh from Havana with dreams of love and success in their original mambo music. Flamboyant, colorful costumes, enjoyable music, delightful, innovative cinematography, and competent acting are pluses in the film, but a few graphic episodes of fornication fatally spoil the movie.

THE MAMBO KINGS mixes a Latin flavor with the mambo craze sweeping America in early 1950s as brothers Cesar and Nester Castillo arrive in New York from Havana bringing their vibrant songs and dreams of fame. Cesar is a flamboyant ladies’ man who manages to flirt with every woman crossing his path. Nester, conversely, is dreamy and introspective, and thinks constantly about a girl in Cuba now married to someone else. When Nester meets a Cuban girl, Delores, he invites her to a club where the brothers are playing. Before long, the two fall in love, fornicate and then marry because Delores is pregnant. Ironically, when Delores comes to the club and meets Cesar, sparks fly. In time, the “Mambo Kings,” as the brothers are known, make it big. However, along the way, they struggle with each other in a kind of love-hate relationship.

THE MAMBO KINGS is an entertaining film with its colorful costumes, original music and capable characterizations by the lead actors. The film captures the nostalgic ambiance of 1950s New York combining striking cinematography with stylistic production numbers reminiscent of the movies of that period. Regrettably, the fornication episodes seriously spoil the film.