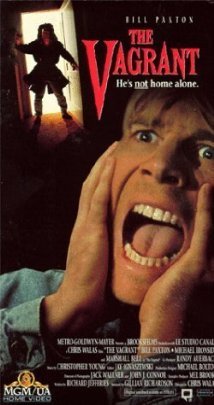 In THE VAGRANT, a rising junior executive buys an older home to enhance his lifestyle, but discovers a disgusting vagrant living in it. After his eviction, the man continues to camp outside his house and stalk him, finally ruining his life. The film is a tightly knit thriller. Regrettably, it is fatally marred by foul language, excessive violence, sexual immorality, and graphic fornication scenes, and partial upper female nudity.

In the film, THE VAGRANT, ambitious junior executive Graham Krakowski seeks to upgrade his lifestyle by purchasing an older home in Arizona. Much to his chagrin, he soon discovers a mysterious, grotesque derelict camping out in his home-to-be. However, despite the vagrant’s eviction by police, he takes up residence a short distance outside the house, cooking his meals over an open fire, harassing Graham in numerous ways, and relentlessly stalking him. Then, the murders begin–a widow on Krakowski’s street and a real estate agent–and police begin to suspect Krakowski. He moves away to start a new life only to find the old one, complete with the obnoxious vagrant, following him.

Watching the psychological horror thriller THE VAGRANT can be likened to viewing Hitchcock’s PSYCHO in its heavy duty, suspense-filled, adrenalin-charged emotional impact. Filmmakers have produced in this movie a tightly knit thriller with fast pacing and timing. THE VAGRANT does bear similarities with CAPE FEAR in that the stalker appears to be omniscient and omnipresent–characteristics better attributed to an all-sovereign God. Regrettably, it is fatally marred by foul language, excessive violence, sexual immorality, and graphic fornication scenes, and partial upper female nudity.