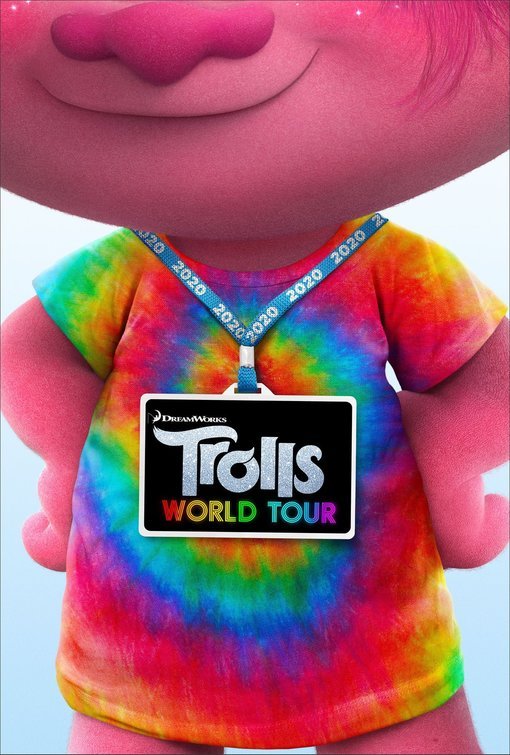 Poppy finds out there are different lands of different types of trolls and wants to go meet them, but Branch thinks they need to be cautious in TROLLS WORLD TOUR. Poppy gets a message from a troll named Barb from the land of Rock and wonders who these trolls are. Her father tells her there are different lands with different trolls with different types of music. Poppy finds out Barb is trying to steal all the types of music and make all music just Rock and Roll. Poppy and Branch head out and try to go help the other lands before Barb gets to them.

TROLLS WORLD TOUR is a psychedelic, frenetic, movie that tries to put in every politically correct stereotypical cultural message possible. The movie has a romantic worldview about following your heart and disobeying our parents no matter what the consequences are. The movie feels like one big music video with added scenes of characters looking tripped out and audiences questioning what is happening. Do yourself a favor and watch TROLLS from 2016 and skip this TROLLS WORLD TOUR.

When Poppy finds out another troll is trying to control the other trolls’ music, she wants to help stop this and save the day in TROLLS WORLD TOUR. TROLLS WORLD TOUR is a psychedelic, frenetic, movie that has very little redemptive qualities to it in terms of quality and morality.

Poppy is given a letter by a troll named Barb about a Rock concert. Wondering who this Barb is, Poppy’s father tells her that there are actually other troll lands in the troll universe. These lands all are known for their different types of music, including: Funk, Country, Techno, Classical, Rock, and, of course, Pop. Each of these lands hold the strings to a guitar that make up the different music types. The strings have been separated, and the lands each hold their own and don’t interact with the other lands. Poppy feels compelled to go see the other lands and try to unite the lands through music.

Even though Poppy is now the Queen of the pop people, she decides to venture out on a balloon ride and go see the other lands, and Branch is not happy, but he decides to go with her also. The truth is, Branch loves Poppy and hasn’t been able to muster up the courage to tell her. Poppy also sent a note to Barb telling her that she would like to be best friends. In reality, Barb is trying to steal all of the strings and make everything Rock, and take away the individual sounds of music. Once Barb receives the letter from Poppy, she thinks of Poppy as a threat and sends out bounty hunters for her, that are all different subsets of music. Will Poppy find out the truth about Barb and be able to help the other lands? Will Branch help Poppy by helping her reason and question the different situations?

TROLLS WORLD TOUR has a romantic worldview and follows almost every political correct statement of the current cultural malaise, mainly to say that we all need to accept our imagined differences and allow people to indulge in self-destructive and culturally destructive behavior. Although it is a Biblical principle to love everyone, it does not mean that people are free to choose perversity because those lifestyles can be destructive to others and themselves. There are repercussions to lifestyles and acting a certain way could hurt someone else, which is a message a child should hear, rather than a child being told at a young age told by a movie they can essentially do whatever they want. At one point, a male voiced character has a baby boy. Another point in the movie, some characters talk about how they were pushed down in society and subjected to a lower lifestyle because of their love of Hip Hop and Funk music.

TROLLS WORLD TOUR is the second TROLLS movie, and in quality and plot value, is nothing like the first. TROLLS WORLD TOUR is extremely hyper and frenetic, starting out a rave and continuing with bold, tripped out sequences that make you wonder if the filmmakers are taking too a lot of psychedelic drugs. Not only that, but also the movie has some plot holes where characters get out of problems and the audience isn’t told how, or characters appear in a scene conveniently, even though it makes no sense. The movie really feels like on big music video, but even the music isn’t up to par with the first TROLLS. Do yourself a favor and show your family TROLLS from 2016 and skip this TROLLS WORLD TOUR.

Audience: Families, but not suitable for children