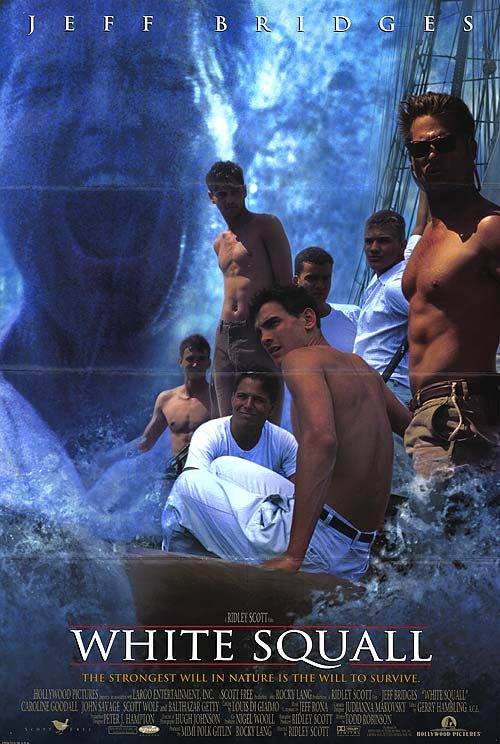 WHITE SQUALL is a tour de force of drama, action and cinematography from master filmmaker Ridley Scott. It shows ordinary people doing extraordinary things during extraordinary circumstances aboard a sail boat "The Albatross." It is a powerful coming of age story that regrettably has some violence, bad language and brief sexual themes.

WHITE SQUALL is a tour de force of drama, action and cinematography. Narrated by Chuck Gieg (played by Scott Wolf of TV’s PARTY OF FIVE), it tells the story of the square-rigged brigantine, the “Albatross.” In the fall of 1960, thirteen select young men were admitted as students aboard the vessel in the Ocean Academy. On this craft, not only would they learn reading, writing and arithmetic, but they would also become united as a crew, each contributing the spit and polish of a worthy seafaring vessel. Helming the ship is Sheldon or “skipper” (played by the able Jeff Bridges). He is a no-nonsense captain that doesn’t tolerate slackers or phobias. As these men travel through the Caribbean and the South Pacific, each face certain challenges such as fear of heights, sexual awareness, relationship with parents, and most of all, a ferocious storm or WHITE SQUALL.

Down the line, this is a very entertaining and well-crafted movie. Every performance is believable, and each young man clearly defines a character. Each shot is saturated with color and well-thought out composition. This movie shows real life heroism and friendship. The audience will ride a fantastic, if sometimes scary, voyage. It is a powerful coming of age story that REGRETABLY has some violence, bad language, and sexual themes.