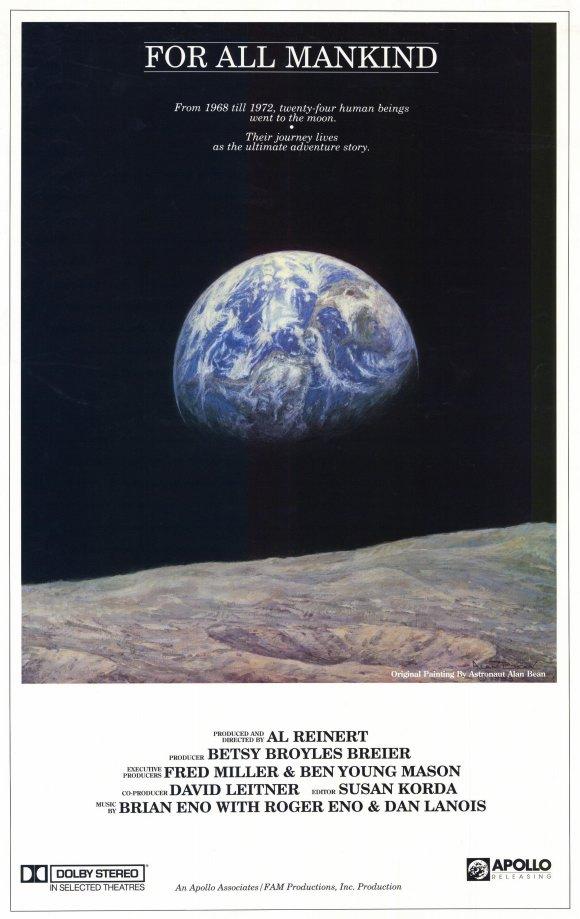 Detailing the lunar exploration missions in the late 60’s and early 70’s, FOR ALL MANKIND is an incredible and wonderful documentary from the archives of NASA. The film footage, narrated by the astronauts, is what they actually saw and said during their voyages.

The story moves through each phase of the missions from launch pad to splashdown. However, rather than describe the Apollo missions separately, the film assembles the memorable moments from each. That is, the launch phase is a composite of all the launches, and so on. Incidentally, you may want to be prepared for the intensity of the launch scene, which is so realistic you can almost feel your seat vibrating from the force.

For 75 minutes, the viewer lives within a space suit, floats in weightlessness, eats from plastic packs, and learns humorously how to use the bathroom in zero gravity. From the lunar orbit, there is a clear view of Earth, a tiny blue marble within the vastness of space. The awesome work of the Creator is therefore visible, “so that,” as Romans 1:20 says, “men are without excuse.” The astronauts themselves sense a spiritual Presence, and some of the insightful dialogue refers to the work and grace of God, affirming Genesis 1:1, “In the beginning God created the heavens and the earth.”

It would be difficult to understand, after seeing the film, how anyone could deny that the creation is the work of a Master Builder and Architect. A wonderful triumph of cinematography, the film is thus an excellent teaching opportunity to explain to children how the world and universe came into existence. (Two instances of mildly crude language almost go unnoticed). The only problem with documentaries of this nature is that they do not always receive a wide showing. If the picture does make it to your area, take the family to see it. It’s informative, entertaining and great fun!

Watch FOR ALL MANKIND: