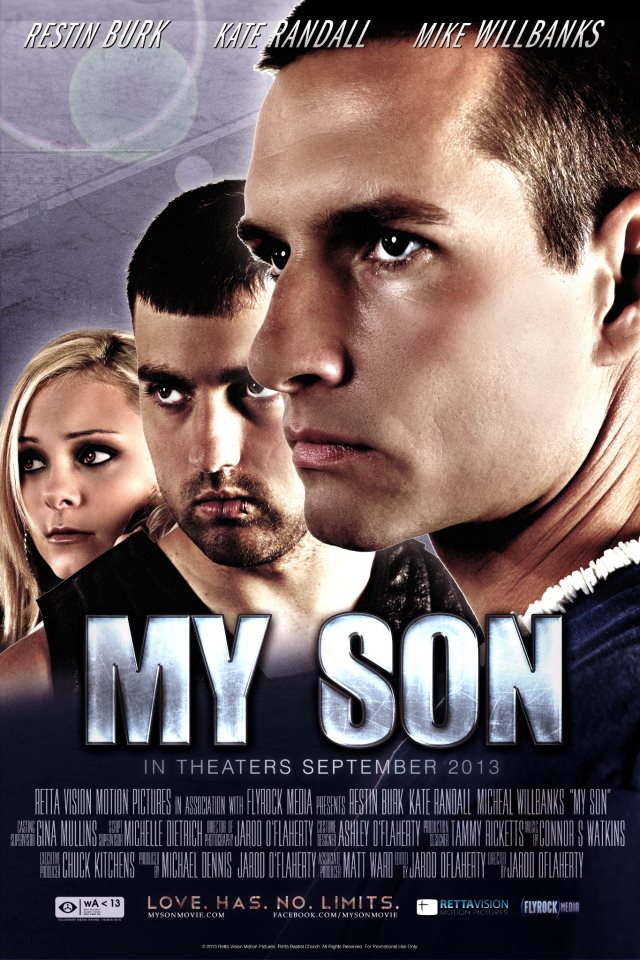 MY SON is another low-budget Christian movie with an excellent ending. An unwed mother has gotten in trouble with the law and is now on probation. She never takes her son to visit her parents and she’s started to shack up with an earnest, but poor young man with an unruly friend. So, the parents are suing their daughter for custody of their grandson. When the parents win custody, the boyfriend’s erratic friend hatches a plan to kidnap the grandson while he’s in the church where the parents worship. This leads to an intense situation with many lives on the line.

The ambient sound, music, and parts of the script and acting in MY SON leave a bit to be desired. That said, the story gels in the second half as the plot to kidnap the grandson unfolds. In fact, the third act put MOVIEGUIDE® on the edge of its seat. The third act also contains three powerful conversions. However, MOVIEGUIDE® advises some caution with MY SON for brief intense violence, brief marijuana use by minor characters in one scene, and four examples of foul language.

(CCC, BB, H, Ab, L, V, S, N, AA, DD, MM) Very strong Christian worldview with strong moral elements stressing putting personal trust in Jesus, believing in God through Jesus, prayer, church, and villain is an atheist who attacks belief in God and church; one “f” word, one “h” word, and two light profanities; strong, intense violence with some blood includes man shot in stomach, man shot in back, man shot in head, man threatens church people with rifle and handgun, man gets blood on his hands when he tries to attend to dying man, boy hits another boy in upper arm; no sex scenes but talk about unwed pregnancy and getting “knocked up,” unmarried couple lives together and is shown lying in bed in at least one scene; upper male nudity; alcohol use at party and some light drunkenness; smoking and marijuana use at a party; and, rude behavior and talk, atheistic cynicism, dysfunctional family but family eventually reconciles, rebellious boys and young men, boys act up in church, father gets overly angry at teenage daughter’s soccer game, angry father appears to lack faith in the power of prayer during a tense situation that could end in violence..

MY SON is another low-budget Christian movie with a really good ending. Unjustly rated R by Hollywood, it’s more of a PG-13 movie (see the CONTENT section above and the rest of the review below).

The movie opens in 1999 with a distraught mother taking her son, her son’s best friend, and the friend’s younger brother to a small church. Led by the unruly friend, the boys refuse to settle down during the sermon and the mother takes them out after an usher speaks to her.

Cut to present day as TV reporters discuss a church shooting where some people have died. The movie then jumps to six months before the incident as it reveals what led up to the shooting.

The story focuses on the twentysomething son of the mother in the first scene, Cadon. Cadon has just finished introducing his new girlfriend, Jessica, and her young son, Austin, to his unruly, cynical friend, Bo. Cadon has invited Jessica and her son to move in with him, but Bo is jaded about the whole thing. Bo is clearly an unpleasant fellow to be around, but Cadon still thinks of him as a great friend. Especially when Bo gives Cadon and Jessica $100 to help them out financially.

Meanwhile, Jessica’s parents are considering trying to sue their daughter to get custody of their grandson. They decide to go ahead with that plan, because Jessica seems unable to take care of her son.

When Austin’s birthday comes up, Bo convinces Cadon and Jessica to let him organize the birthday party. However, Bo invites too many of his inappropriate, unruly, pot-smoking friends. The next day, Jessica has to explain all the party mess to the childcare worker sent to Cadon’s house in the wake of her parents filing for custody of Austin.

In court, Jessica loses custody of Austin. Cadon tries to convince Jessica they can regain custody if they get married and she gets a job, but Jessica will have none of it. She blames Cadon and Bo for the custody loss and becomes despondent.

Desperate to make Jessica happy, Cadon turns to Bo for advice. Bo convinces Cadon and Jessica that they should hatch a plan to just take Austin away from Jessica’s parents while they’re at church and Austin’s in the nursery. What Jessica and Cadon don’t know is that Bo has brought two guns to steal some church money at the same time. Of course, the plan goes awry, which leads to an intense situation.

The ambient sound, music, some of the acting, and parts of the script in MY SON leave something to be desired. There’s also an intrusive music soundtrack that’s overused to deal with the lack of a bigger sound budget. That said, the story begins to gel in the second half as the three lost young people employ their plan to kidnap Austin. It leads to a very intense third act, including a suspenseful showdown, that puts viewers on the edge of their seats.

MY SON also has at least three powerful conversions in the third act. One of them involves the church’s new black janitor taking time to encourage Cadon to have faith and pray to Jesus. His words to Cadon have the desired effect, but the movie still could use a short scene actually showing Cadon accepting Jesus and praying to Him.

According to Hollywood’s Motion Picture Association of America (MPAA), the reasons for MY SON’S R rating is violence and some drug use. Though there is some blood in the movie when two or three people are killed, it’s not enough to give MY SON an R rating. Also, the movie doesn’t promote the marijuana use depicted in the party scene that eventually produces the movie’s plot problem. MOVIEGUIDE® has seen much worse content in movies the MPAA has rated only PG-13.

MY SON does have some light foul language. Also, the friend’s younger brother is heard saying an “f” word. This content, and the violence, not to mention the bad behavior of some characters, warrant caution for older children. MY SON is not a movie for younger children, but it’s a good Christian movie for mature viewers.