"Celebrating the Power and Beauty of Art, Language and Meaning" 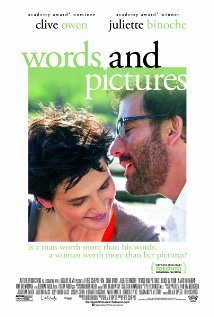 WORDS AND PICTURES is a lively romance about an artistic and personal battle between a brilliant but alcoholic Honors English teacher and the school’s new art teacher at a boarding school in Maine. Jack, the English teacher, constantly challenges Dina with his belief that words and literature are better than pictures and painting. Dina is an acclaimed painter who’s had to become a teacher because she’s suffering from chronic rheumatoid arthritis. Their professional battle inspires their students, who will get to vote at the end of the year on which is better, words or pictures. Things get complicated as Jack and Dina begin to fall in love, despite their differences. Jack’s alcoholism creates problems.

Starring Clive Owen and Juliette Binoche, WORDS AND PICTURES is brilliantly written, directed and acted. It’s a clever and often inspiring and exhilarating romantic comedy with some interesting, profound things to say about the importance and influence of art, both literature and painting. However, there’s lots of PG-13 foul language, brief lewd content, and a subplot about overcoming alcoholism. So, MOVIEGUIDE® advises extreme caution for WORDS AND PICTURES.

(Pa, BB, Ro, H, C, PP, Ab, LLL, V, S, NN, AA, D, M) Light mixed pagan worldview with some strong moral elements such as man rebuked for his alcoholism, student rebuked for bullying another student, teachers encouraged by teachers to celebrate and engage in literature and art, with some Romantic, humanist elements, plus some Christian, redemptive elements and values including repentance, forgiveness, a scene extols the God-centered preamble of the Declaration of Independence and how the principles expressed therein were so important to creating the United States of America and its values, and inspiring people from the Founders to Lincoln to Martin Luther King, and one sarcastic moment where man in an AA meeting encourages protagonist to focus on Jesus in his recovery, which is going well so far, but man replies, “I’m not aiming that high”; about 31 obscenities (including one “f” word but mostly “h” and “s” words), five strong profanities, 11 light profanities (including several “for God’s sake”); some violence includes drunken man angrily smashes things in a couple scenes, drunken man stumbles or falls off chair in other scenes, drunken man stumbles against wet painting during the night and damages it; implied fornication in one scene, and student has drawn lewd cartoons of female student and female teacher, which are shown; upper female nudity in lewd cartoons drawn by mean student and brief upper male nudity; alcohol use, alcohol abuse and protagonist is an alcoholic, but he repents and begins to become sober and improve his character; smoking; and, mean student mocks female student and female teacher, alcoholic protagonist estranged from his son, and woman is known as “The Icicle.”

Starring Clive Owen and Juliette Binoche, WORDS AND PICTURES is a clever and often inspiring and exhilarating comedy with some interesting, profound things to say about the importance of art, specifically literature and painting. It has some problem areas, however, requiring extreme caution.

Set at a boarding school in Maine, the movie opens with a famous female painter, Dina Delsanto, coming to the school to teach fine art. Jack Marcus, the school’s brilliant, but irascible and alcoholic, Honors English teacher, immediately challenges Dina with a word game he likes to play with the other teachers. This irritates Dina, but Jack keeps pressing her.

On her first day with the students, most of whom are also in Jack’s Honors English class, Dina tells the students, “Don’t trust the words. The words are lies!” Jack later challenges her about this comment, asking, “So, the words are lies?” However, Dina reminds him of the old saying, “A picture is worth a thousand words.” This sets up a big battle between them, with the students caught in the middle. The question at hand is, Which is better? Words or Pictures? Literature or Painting?

Jack brilliantly begins to lay down the first gauntlet in class by reminding his students of the words from the Declaration of Independence, “We hold these truths to be self-evident:  That all men are created equal, and that they are endowed by their Creator with certain unalienable rights. That among these are the right to life, liberty and the pursuit of happiness.” He melds these words into similar quotations from President Abraham Lincoln’s Gettysburg Address and from the speeches of Martin Luther King to show the students that such words can inspire people to change the world.

Eventually, Jack and Dina agree that the battle between Words and Pictures will result in an assembly where Dina and her students will unveil new paintings picturing a poem Jack wrote and where Jack will deliver a speech about those paintings. The students will then vote on who wins, Jack or Dina, the Words or the Paintings.

The plot problem in this story is twofold. First, Dina is suffering from rheumatoid arthritis, which hampers her ability to paint anything truly worthwhile. Second, Jack’s alcoholism puts his very job in danger. Worse, it puts the budding romance between Jack and Dina in danger as well, especially because Jack’s alcoholism is actually a reflection of deeper flaws and problems within his character.

WORDS AND PICTURES is brilliantly written. The romantic and intellectual battle between the troubled English teacher and the physically disabled painter comes to vibrant life in both the plot and the clever dialogue. The art teacher, Dina, is physically crippled by her arthritis. Meanwhile, the English teacher, Jack, is psychologically crippled because his promising early career as a poet has been stifled by years of writer’s block. This in turn has driven him to drink, or at least has made his innate alcoholism worse. Ultimately, Jack inspires Dina to overcome her physical disability, and Dina inspires Jack to become a better man and stop drinking.

Both Clive Owen and Juliette Binoche do a marvelous job bringing this story to life. Amazingly, Binoche herself is an avid painter and actually painted all of the paintings her character paints. They are assisted by a fine supporting cast, led by veteran actor Bruce Davison as another teacher.

WORDS AND PICTURES has some wonderful scenes showing the good, the bad and the ugly that words, pictures, literature, and painting can do. Ultimately, however, it celebrates and accentuates the best, the positive things, they can do, rather than the negative. The movie’s at its best when it shows the ways in which literature and painting can uplift and enrich the human spirit, such as the Declaration of Independence scene. The movie also shows the English teacher ultimately overcoming his alcoholism.

That said, WORDS AND PICTURES doesn’t have an explicitly Christian worldview toward art and beauty. So, at times it seems to gravitate toward a Romantic or even a humanist worldview about that subject and about its character relationships and situations. This also means that WORDS AND PICTURES has a lot of foul language. In addition, it’s implied that Jack and Dina sleep together one night. Furthermore, at one point, a troubled student draws mean nude cartoons of a shy female student and the art teacher. Although the culprit, when revealed, is immediately expelled, the movie does show those two drawings. Finally, despite the movie’s affirmation of the God-centered passage in the Declaration of Independence, a scene at a recovery meeting for alcoholism shows the male protagonist overtly rejects a suggestion that he use Jesus as his “higher power.” The man replies, “I’m not aiming that high.” To which Christians might well ask, “Why not?”

Eliminating this negative content, or at least significantly reducing it, would give WORDS AND PICTURES a broader audience, and make an even better movie. Despite its current flaws, the movie still is often inspiring and thought-provoking as well as very funny, touching, and thoroughly captivating. However, MOVIEGUIDE® advises extreme caution.