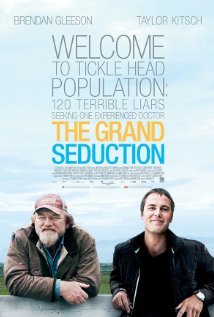 THE GRAND SEDUCTION is a winsome, often delightful Canadian comedy set in a small Newfoundland harbor town. The town’s thriving fishing industry is kaput, and all the people are on the public dole. The town’s mayor skips town to take a job in the big city. So, Murray, one of the town’s other leaders, decides to lead an all-out effort to attract a young American doctor for the town so a factory will be built. To convince the doctor to stay, the town has to weave a web of lies. Murray earnestly leads the campaign, but, as he gets to know the doctor, his conscience starts bothering him.

THE GRAND SEDUCTION is very funny, winsome, and heartwarming. The characters are well defined and appealing, even when they’re lying. Most of the lies are resolved in a positive way as the truth comes out and Murray finally develops a conscience. The biggest problems are some foul language, drinking, an ironic drug joke, and a few bawdy moments. So, THE GRAND SEDUCTION warrants strong caution, especially for older children and other sensitive viewers.

(BB, CapCap, ACAC, C, Pa, E, LL, V, S, AA, DD, MM) Strong moral, capitalist worldview that ultimately promotes truth, family, hard work, business, and true friendship and attacks socialist welfare programs as breeding laziness and shame, plus some Christian content such as a prominent sign in the local Christian church says, “Let there be light” and the local church is a major building in town where people meet together but so is the local bar and grill, there’s lots of lying and deceit for gain but it’s resolved positively, and young townswoman makes an environmentalist comment putting down oil companies but older man offers another opinion about it; five obscenities (including one “s” word), four strong profanities (including man says “Sweet Jesus” twice and seems to mean it partly in a positive way), and two light profanities (“For God’s sake” and “God”); light comic violence such as drunken man stumbles and man comically catches fish that was placed on the hook for him by a scuba diver, plus brief scenes of a couple hockey games on TV; no depicted sex, but in two outside shots of houses in small town, the sound of wives of husbands pleasing them can be heard, man encourages pretty young woman to flirt with a handsome young man but she refuses, and people secretly listen to young man having sexy phone talk with his bride-to-be; no nudity; alcohol use in several scenes and drunkenness in one scene; very brief smoking and a couple references to cocaine (one is meant to be ironic and elicit a laugh); and, lying and deceit, plus corporate official slyly demands a $100,000 bribe under the table for building a factory and town surreptitiously takes out a loan to pay it.

THE GRAND SEDUCTION is a winsome, often delightful Canadian comedy about a small struggling harbor town that tries to fool a young American into becoming the town’s doctor so they can win a contract with an oil recycling company. Dampening the movie’s fun are some bawdy but funny jokes and foul language. Also, the story involves a lot of lying, but things are set right in the end.

The story begins with a flashback, where a man named Murray tells viewers what the small fishing town of Tickle Cove, Newfoundland was like when he was a young boy. All the fathers had jobs as fishermen. They and their families were satisfied and happy, including the wives.

Thirty years later, the fishing has dried up, and everyone’s on the public dole, including Murray. Every other Friday, the people line up to cash their welfare checks from the single teller at the tiny local bank outlet. Murray actually has two checks to cash, one of them for a dead friend who gave him a “power of attorney.” Murray’s wife isn’t happy about this cheating and lying. She wants them to move to the big city nearby and get jobs, but Murray loves his hometown too much to leave.

There’s only one hope for the town. An oil company is looking for a place to build an oil recycling factory. The only thing they need to seal the deal is proof that Tickle Cove has a doctor on contract.

That’s easier said than done, however. Murray’s wife has gotten tired of waiting for the town’s mayor to hire such a doctor. So, she leaves Murray to get a job in the big city.

When the mayor does the same thing and skips town, Murray figures the only way to get his wife to return is to find a doctor for the town. Just then, a young American doctor named Paul falls into the town’s lap. As acting mayor, Murray enlists the whole town to seduce the doctor into staying. However, they have to lie to him to do it.

For instance, Paul loves cricket but everyone in town knows nothing about cricket and prefers hockey. In several hilarious scenes, the townspeople fool Paul into thinking that everyone in Tickle Cove’s just crazy about cricket. Luckily, the cricket season is ending, so the town doesn’t have to continue this pretense every day.

Murray keeps pushing the envelope, however. He taps the phone where Paul is staying so the town can have inside information about what else Paul likes and doesn’t like. Learning that Paul’s father died when he was young, Murray takes Paul fishing and starts acting like a father figure to the young man. Murray even has people occasionally leave $5 on the pier for Paul to find at night as he walks back to the house where he’s staying.

As the decision for the factory contract looms, Murray’s conscience starts bothering him, even though he’s anxious for his wife to return home. Will Murray go through with the plan as the town baits the hook for Paul one last time to land their human fish and ensure the town’s future?

THE GRAND SEDUCTION is very funny, winsome, and heartwarming. The characters are well defined and appealing, even when they’re lying. Most of the lies are resolved in a positive way as the truth comes out and Murray finally develops a conscience. Even better, the movie promotes the idea that capitalism is good, working for a living is even better, and being on the public dole is bad. Also, the movie shows that capitalism and hard work are actually good for family life and good for one’s moral and psychological health. That said, there is one environmentalist comment against oil companies from one young person, but Murray cogently disagrees with her. Also, the town has to bribe one of the oil men by getting a loan to pay him off.

Ultimately, the bigger problems with THE GRAND SEDUCTION involve some foul language, including a few strong profanities. Also, there are some bawdy jokes and a joke about cocaine use. Twice during the movie, after the townspeople have put in a good day’s work, the husbands and wives are shown going to their bedrooms together. As the married couples settle in their beds, the sounds of the wives in the throes of passion with their husbands are heard outside. In another scene, two townswomen tapping Paul’s phone overhear him making sexy talk with his girlfriend in America.

As usual, Brendan Gleeson is wonderful as Murray. Gordon Pinsent is very funny as Murray’s friend, Simon. Taylor Kitsch turns in a fine performance as the doctor, and Liane Balaban is really good as the doctor’s possible new love interest.

The foul language and brief bawdy moments in THE GRAND SEDUCTION warrant strong caution, especially for older children. Furthermore, if teenagers see the movie, older media-wise family members should discuss with them why all the lying started to bother Murray, the movie’s comical hero. The local church, the local pub, and the post office are the major buildings in the town. Viewers get to see all three.