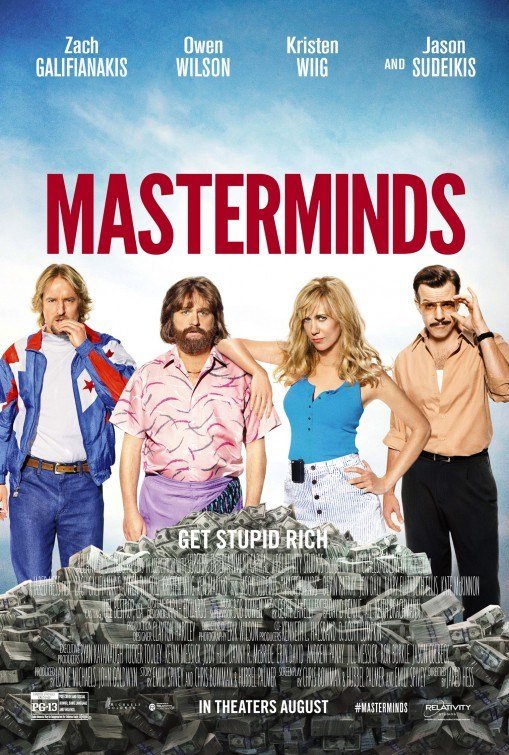 MASTERMINDS is a delirious comedy based on the ridiculous circumstances surrounding the largest cash robbery in United States history. A goofy, not-too-bright armored car guard named David has fallen for his former female co-worker, Kelly, even though David’s engaged to another woman. Kelly’s married friend Steve convinces her to seduce David into robbing her former company. David manages to steal a cool $17.3 million in cash, but he fails to take one of the four security videotapes showing his identity. This results in comical complications that build to a satisfying comical ending.

Some of the stupidity of the criminals is a bit over the top. However, MASTERMINDS turns out to be a delightful screwball comedy containing inspired inventiveness and some rapid-fire comic perfection. That said, the movie has a strong pagan worldview, mitigated by light moral elements. For example, there are a couple positive references to God. Also, the FBI does bring the criminals to justice, but with some comical twists. However, MASTERMINDS has about 20 mostly light obscenities and profanities and brief innuendo. All in all, therefore, MOVIEGUIDE® advises extreme caution.

(PaPa, B, LL, VV, MMM) Strong pagan worldview about a comical armored car robbery plot, mitigated by some morally positive elements including man says, “God brought us together,” and there’s some comeuppance for criminal wrongdoing and breaking the law, though $2 million of the stolen money isn’t found; 12 obscenities, one possible strong profanity and seven light profanities, plus man starts to say SOB but doesn’t finish it, and about four scatological jokes, including man throws up, man drinks Mexican water and has diarrhea in a swimming pool, and a couple jokes about passing gas; strong, mostly comic violence such as two women fight in a department store and one woman sprays a feminine hygiene product into the other’s mouth, bumbling security guard accidentally shoots himself down the crack of his buttocks when he stashes his gun in the back of his pants, bumbling guard shoots his gun wildly into the ceiling during a robbery because he’s nervous, bumbling guard crashes armored vehicle through a wall, hitman shoots one bullet from an old rifle and winds up falling off a balcony because of the sudden smoke, character escapes on a scooter and then a boat, comical foot and car chase involving a truck and a character using rollerblades, hitman in desperation throws spear at runaway truck, and it hits dashboard, two characters wrestle, explosion of a gas grill blows off man’s shirt, and one criminal hires a hitman to kill one of his cohorts; a couple light sexual innuendoes during the movie and several innuendoes during some outtakes appearing over the end credits, plus man says he would rob anything for the love of his life; upper male nudity at swimming pool and when man’s shirt is blown off by an explosion; light alcohol use; no smoking or drugs; and, strong miscellaneous immorality involves stealing $17 million from some banks, betrayal, lying, deceit, kidnapping, and a satirical joke about convicts honoring another criminal.

MASTERMINDS is a delirious comedy based on the ridiculous circumstances surrounding the largest cash robbery in United States history. Though a bit exaggerated, MASTERMINDS is an hilarious crime caper gone wrong, with a strong pagan worldview and about 20 relatively light obscenities and profanities, but there are some moral elements about criminals getting their comeuppance.

Based loosely on a true story, the movie follows the late-1990s of a dim-witted security guard named David Ghantt (Zach Galifianakis), who was tricked into robbing his armored car company of $17.3 million in 1997. The real mastermind of the operation is a guy named Steve (Owen Wilson). Steve is friends with David’s former fellow guard, the beautiful Kelly (Kristen Wiig). Steve uses Kelly as a means to woo David into the theft because David’s in love with her despite being engaged to a woman named Jandice (Kate McKinnon).

David agrees to pull off the robbery in hopes of winning over Kelly, who’s unsure of herself and is easily convinced to concoct the robbery. He’s also hopelessly bored with his life and tired of being poorly paid. So, he jumps at the chance for excitement and steals an armored vehicle filled with cash before stupidly handing it all over to the rest of the gang.

Steve sends David off to hiding in Mexico with $20,000 in bundled cash stuffed in his underpants, hoping to keep him out of the way so he won’t ever tell the police what happened. He also hopes David won’t be able to come back and demand his share of the loot. Steve has managed to hide his identity from David the whole time, using Kelly as his intermediary. Meanwhile, Kelly has promised to join David in Mexico, though she has no intentions of doping so.

However, David figures out who Steve is and threatens to spill the beans on the entire operation unless Steve wires his share of the money to David’s bank in Mexico. So, Steve hires a hitman named Mike (Jason Sudeikis) to kill David. Since David forgot to steal one of the four tapes inside his company’s vault area, the FBI is hot on David’s trail. Leading the FBI team is a tough-talking agent played by Leslie Jones.

Some of the stupidity of the criminals in this comedy is a bit over the top. However, MASTERMINDS turns out to be a delightful screwball comedy full of inspired inventiveness and some rapid-fire comic perfection. The plot is ever twisting and full of laughs, the dialogue snaps with comic crackle, and the performances are all distinctive and a joy to experience.

Even better, the screenplay by Chris Bowman, Hubbel Palmer and Emily Spivey keeps the amount of foul language and sexual humor far more contained than most current wild comedies. MASTERMINDS is risqué enough, however, and has enough comic violence and foul language, to make it inappropriate for children.

Director Jared Hess (NAPOLEON DYNAMITE, NACHO LIBRE) makes a nice comeback with MASTERMINDS, following his unmitigated 2010 disaster, GENTLEMEN BRONCOS. He has a unique comic vision tying together oddball characters (the wigs and costumes in MASTERMINDS are a sight to behold) and off-the-wall set details. He fine-tunes nearly every small detail on screen to deliver some laugh-out-loud comedy.

MASTERMINDS has a strong pagan worldview, mitigated by some moral elements. One character says, “God brought us together,” a comment that, in context, has a positive meaning. Also, the criminals eventually get their comeuppance, with appropriate prison sentences doled out according to the worst of the offenders. However, the movie implies the comic hero gets away with hiding $2 million of the stolen money. Also, in one romantic scene, the comic hero tells his romantic interest he would rob any bank for her. Finally, MASTERMINDS has about 20 mostly light obscenities and profanities and some innuendo, especially in several funny outtakes over the end credits. This negative content fits in with the movie’s generally pagan, though mixed, worldview. So, MOVIEGUIDE® advises extreme caution.