REBEL IN THE RYE

"The Life of Author J.D. Salinger" 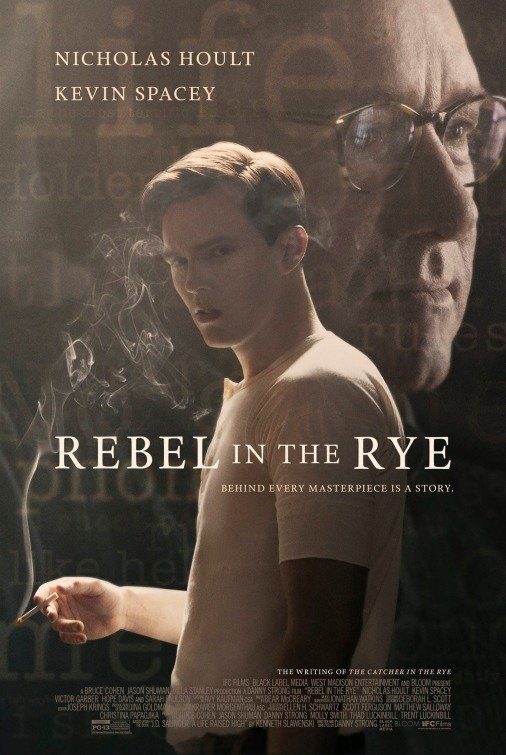 REBEL IN THE RYE tells the story of the influential American writer, J.D. Salinger, author of THE CATCHER IN THE RYE. The movie focuses on his early life and career. Salinger grows up with one desire: to be a published writer. However, he’s plagued by terrible school grades, his father’s disappointment in his career choice, the loss of his first love, and traumatic experiences during World War II. A writing teacher and mentor, and a Hindu yogi, help Salinger get published, but the tremendous success and fame from his first and only novel leads him to withdraw from the world.

REBEL IN THE RYE is an engaging movie, with some impressive acting. However, it’s somewhat shallow and descends into clichés. The movie has a strong Romantic worldview where artistic self-expression is the primary goal of a fiction writer. This is mitigated by some moral, redemptive elements, even though Salinger is sometimes prideful, self-righteous and condescending. However, the movie seems to side with Salinger’s interest in false Eastern religion. REBEL IN THE RYE also contains some war violence, foul language and alcohol abuse.

(RoRo, BB, C, PaPa, FRFR, LL, VV, S, AA, D, MM) Strong Romantic worldview Dominant moral worldview, protagonist upholds Biblical virtues of love, truthfulness, and honesty although he struggles with pride, a desire to succeed and self-righteousness he wants to be an honest writer who gives people truthful situations to read about, an implication that man saves sex for marriage, Salinger respects and honors his parents even though he doesn’t agree with their career choice for him, protagonist uses meditation and prayer to ease his mind after the war, protagonist befriends a spiritual yogi who teaches him to meditate, shot of protagonist meditating and praying, no depiction of the Bible, but reference to a higher power for comfort and strength, mention of God’s name as a source of higher power; eight or nine obscenities and four GD profanities; moderate violence (not graphic) includes references to war atrocities as soldiers liberate a concentration camp during World War II, explosives and bombs and gun shots go off during battle, wounded soldiers lay on the ground, men get body parts blown off during battle, depicted images of bloody soldiers with gashes and wounds, disturbing shot of starving men and women in concentration camp with blistered frail hands begging for food, scene takes place on Utah Beach during D-Day invasion, light action violence, and writer throws things around in his room and kicks his shoes at the wall; implied sexual promiscuity, 19-year-old girl marries a 60-year-old man, and the alarming significant age gap makes the news, man kisses woman after a date and dances with her, but no implication to sex before marriage, man kisses his wife on the lips and hugs her; no nudity; heavy drunkenness, underage teenagers drink at nightclubs and bars, men in their 20s take shots repeatedly and overindulge on whiskey, writer drinks and becomes drunk when he’s sad and depressed, 20-year-old man gets so drunk he slurs his words and stumbles in the park, married man drinks straight whiskey to cope with financial problems at home, book editor drinks wine and champagne to celebrate with her client each time he sells a story, writer is flooded with drinks at social events after he becomes a success, heavy social drinking; no illegal drug content or references but heavy cigarette smoking, main character smokes continuously throughout the day in the majority of scenes; and, miscellaneous immorality includes divorce, pride, revenge, and dysfunctional families.

REBEL IN THE RYE is a biographical drama about the early life of acclaimed author J.D. Salinger, which follows Salinger as he first gets published, goes off toe World War II and then publishes his most famous novel, but is disturbed by all the intense publicity, acclaim and attention he gets for it. Based on a biography about Salinger’s life, REBEL IN THE RYE is an engaging biopic, with some impressive acting, but it has a strong Romantic view about artistic self-expression, with some moral elements, some New Age, Hindu content, and some war violence, foul language and alcohol abuse.

The story begins in 1939, with Salinger in an upscale jazz bar with some friends. He longs to take Oona, the daughter of the popular playwright Eugenie O’ Neil, on a date. His friend tells him that she loves to date writers but only published ones. He goes up to her to introduce himself, but when he confesses he’s an unpublished writer, her friends whisk her away to meet a different man. This is the first rejection of many he will receive in his lifetime, but it gives him the drive to get his work published.

Salinger slaves away day and night writing various short stories. He becomes very close to his college professor and mentor (played Kevin Spacey), who encourages him to never stop writing. Spacey is the main source of support in Salinger’s desire to write. The two men form a deep friendship that’s similar to the relationship between the teacher and the students in DEAD POWET’S SOCIETY with Robin Williams.

The movie uses a string of voiceovers from Salinger to take the reader into his writer’s mind and what he feels about himself despite the tough exterior he portrays. The vulnerable voiceovers are at times heartbreaking, but it’s an honest glimpse into the insecurities all humans feel about themselves. This is when Salinger creates his most noteworthy character, Holden Caulfield. Holden is a cynical young man who desires that truth be told at all times. Salinger’s writing professor and mentor, Whit Burnett, publishes Salinger’s first short story about Holden. So, Salinger goes back to the jazz club and asks Oona on a date. She agrees. The two start dating, but Oona is a broken child who dreams of being an actor in Hollywood and not the sort of girl with whom to settle down. Yet, she promises she’ll wait for Salinger after he goes to fight in World War II.

Salinger is drafted into the army and is sent overseas to fight in Europe. During this time, he witnesses excess tragedy, death and suffering. He watches all his friends die on the battlefield while he lives. One day at base camp, he sees an article in the paper that says Oona married the 60-year-old Charlie Chaplin. The scandal spreads, and Salinger is devastated. He turns back to writing and with the advice of his teacher goes to work on a novel about Holden Caulfield. He pours himself into writing the novel and feels it’s the only thing that helps him survive the war.

After the war, Salinger returns home. He visits his parents and has an ill-conceived eight-month marriage with a German woman. They divorce, and Salinger goes back to work on his book. However, his night terrors from the war trauma he suffers take over his mind, and he loses the will to write.

Salinger seeks peace and befriends a Hindu yogi, who teaches him to meditate to get rid of his writer’s block. Salinger eventually gets his Holden Caulfield novel, CATCHER IN THE RYE, published and becomes a mega success. He marries a supportive woman, and they have two children, but the tremendous fame that comes with his novel CATCHER IN THE RYE isn’t what Salinger envisioned. So, he moves into the New Hampshire countryside to escape the distractions and crazed fans in the city. After achieving so much acclaim, people want more of his works, but he eventually decides he will never publish again. Salinger spent the rest of his life in his secluded home in the woods writing the days away, but he never published anything after 1965.

REBEL IN THE RYE is an engaging movie with strong production elements and some good acting. However, it’s a somewhat shallow, paint-by-numbers look at Salinger’s life that sometimes descends into clichés.

Basically, the movie has a strong Romantic, iconoclastic worldview that says artistic self-expression is the primary goal of a fiction author or artist. This is mitigated by some moral, redemptive elements promoting love, truthfulness and honesty even though Salinger struggles with his pride, his desire to succeed and his rather self-righteous, condescending attitude toward other people, especially if he thought they were “phonies.” The movie also shows Salinger respects and honors his parents, although he doesn’t always agree with their career choices for him. Finally, the movie shows that Salinger became increasingly attracted to Eastern religion. It seems to side with the idea that Salinger was able to get over his writer’s block by consulting his Hindu yogi. Though the movie doesn’t deal with the rest of Salinger’s life, looking at the historical record of his life, Salinger’s Eastern beliefs in the 1950s and 60s seem to be a precursor to the New Age Movement that developed in America and other parts of the world in the 1970s. In two of his most famous short stories, “Franny” and “Zooey,” Salinger promotes a syncretistic, universalist approach to Christianity, Buddhism and Hinduism similar to what many New Agers often teach.

Though perhaps a bit too superficial, REBEL IN THE RYE seems to be a truthful representation of Salinger’s life up to the mid 1950s. However, the movie’s Romantic worldview and support for Salinger’s beliefs in false Eastern mysticism, including Hinduism and Zen Buddhism, are unacceptable. REBEL IN THE RYE also contains some brief foul language (including some strong profanities), war violence, the protagonist’s inability to settle down with just one wife, and alcohol abuse.