NANCY DREW AND THE HIDDEN STAIRCASE

"Modern Remake of a Classic Tale" 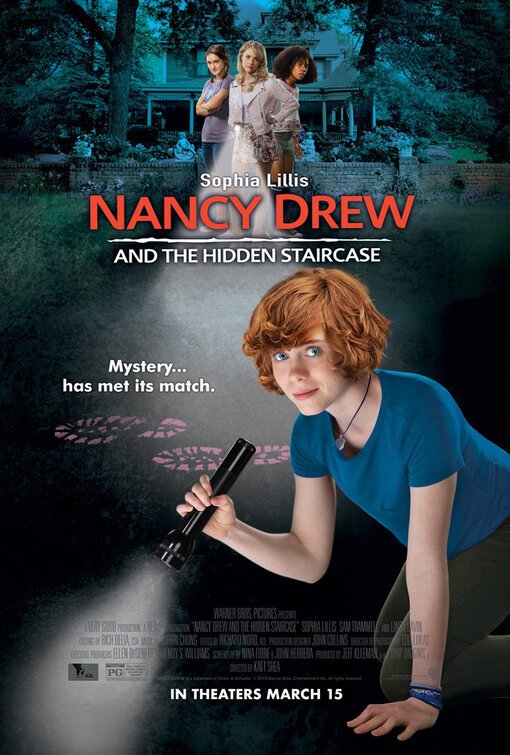 In NANCY DREW AND THE HIDDEN STAIRCASE, the amateur teenage sleuth is a red-haired, assertive 16-year-old tomboy who loves to stick her nose into every mystery in town. This often gets her into trouble. That’s what happens when Nancy offers her services to investigate a haunted house. After spending the night in said house, she discovers a hidden staircase riddled with clues. This leads her to believe people, not ghosts, are responsible. As she gets close to solving the case, her dad is kidnapped. Now, Nancy must find him before it’s too late.

This 2019 version brings the Nancy Drew franchise into the 21st Century with the use of modern tech, but it still has hints of decades past. The subplot of a railroad providing a boon to the local economy is a little odd. That said, all the characters are likable, and the story is fun. Even better, the movie has a strong moral compass where characters are held morally accountable. However, there are several strong profanities and some faked paranormal activity that could scare children in NANCY DREW AND THE HIDDEN STAIRCASE.

(BB, O, AC, LL, V, N, A, DD, M)
Dominant Worldview and Other Worldview Content/Elements:
Strong moral worldview where wrong actions have consequences and characters make amends for their mistakes, a character mentions “praying” but it could be interpreted as facetious, a woman believes she’s being haunted by ghosts, and it appears that paranormal activity occurs, plus a woman mentions she’s fought communism all her life
Foul Language:
No obscenities but 10 mostly light profanities include several strong profanities profaning the Name of Jesus
Violence:
Multiple people are knocked out by being hit on the head, a “ghost” tries to capture a girl, a car almost runs down a girl, a man gets angry and says he’ll kill someone, someone is kidnapped, people are held at gunpoint, a girl is briefly taken hostage, a man with a gun threatens to kill someone, criminals are beat up by teenagers using household objects
Sex:
No sexual content
Nudity:
A teenage boy is turned blue as a prank, and he takes off his shirt to look at his skin
Alcohol Use:
A hotel lobby worker has spiked her coffee with alcohol
Smoking and/or Drug Use and Abuse:
No smoking but criminals use a chemical mixture with nutmeg to drug people and make them hallucinate; and,
Miscellaneous Immorality:
Various characters lie in several scenes, but sometimes admit it, kidnapping, a high school student cyber bullies a fellow student, girls get revenge on cyber bully by pranking him, girls break into school after hours to use a chemistry lab, and girls hurl insults to purposely try to hurt each other.

NANCY DREW AND THE HIDDEN STAIRCASE is a modern remake of a 1938 movie, and the newest version of Mildred Wirt Benson’s classic book from 1930. In the story, the amateur teenage sleuth uncovers a connection between an alleged haunted house with a hidden staircase and a plot to demolish some historical homes in Nancy’s town. The characters in NANCY DREW AND THE HIDDEN STAIRCASE are likeable, the story is fun, and people are held accountable for the wrongs they do, but there are several strong profanities and some faked paranormal activity that could scare younger children.

This iteration portrays Nancy as a red-haired, blue-eyed, 16-year-old tomboy who loves to skate and stick her nose into every mystery that presents itself. She’s brash and assertive, and she likes to take matters into her own hands. This often gets her into trouble, and it’s revealed she has a bit of a juvenile record with the law. Her latest adventure finds her in handcuffs after she solves the mystery of who cyber-bullied her best friend. Instead of going to the proper authorities, she decides to orchestrate an elaborate revenge plot and commits several felonies in the process. Despite her dad being a bright lawyer, he’s unable to get her out of her community service sentence.

While picking up trash in a local park, Nancy runs into Flora, an eccentric elderly woman who’s contacted the police to help her with what she believes is a ghostly haunting of her historic home. Called the Colfax Ghosts, the small town legend has it that a double murder took place of the Colfax brothers in the 1800s, and their bodies were buried in the walls of the house.

When the police refuse to help, Nancy offers her services. Flora’s willing to give Nancy a chance, having a soft spot for the young girl. The only problem is that her niece, Helen, is the girlfriend of the boy who did the cyber-bullying. So, Nancy is forced to work together with an enemy in order to solve the mystery. The two girls spend the night in Flora’s home and experience what appears to be a paranormal haunting. However, Nancy’s unconvinced.

Nancy and Helen go exploring and discover a hidden staircase behind a bookshelf, riddled with clues, that leads to the outside. Nancy concludes that human beings, not ghosts, are responsible for these repeated “hauntings,” but why?

Meanwhile, Nancy’s father is working to block a train line from coming to their small town, which will force historical homes (including Flora’s) to be demolished. Those who have a lot of money invested threaten both Nancy and her father if they try to stop it.

Just as Nancy makes some serious headway in solving Flora’s haunting problem, her dad is kidnapped. After having lost her mother several years prior, Nancy can’t bear the thought of losing her dad as well. Desperate to find him, she takes off on a new adventure. Little does she know, it will also lead her to the truth of the Colfax Ghosts.

While this 2019 version of the story definitely brings the Nancy Drew franchise into the 21st Century with the use of modern tech, it still has subtle hints of decades past. It’s set in the small town of River Heights, which is described as “square” by Nancy’s aunt who has some big city experience. Nancy also doesn’t like living there and prefers her previous home in Chicago. Nancy and her teenage friends joke about how many horses the town has, mentioning it has one, and then another friend corrects that to say the town now has four horses. Also, the B plot of a train coming to town to provide a boom to the local economy is a bit 19th or early 20th Century. Both of these occurrences feel a bit odd in a movie set in 2019. That said, the story is fun and all the characters are likable, but typical portrayals of what you’d expect from a movie geared toward children and teens.

One refreshing thing in THE HIDDEN STAIRCASE is its positive moral compass. Although quite a bit of lying and revenge happens, the characters are held accountable for the most part and even apologize for their wrongdoings. At one point, Nancy explicitly states that revenge is wrong, making sure children know that revenge isn’t the answer to their problems. You can expect a certain level of violence and scare in a mystery movie, and while there’s nothing particularly graphic, small children might be frightened by the ghostly activities that happen in a couple scenes. There is also a hostage situation that happens at gunpoint. While no obscenities occur, there are several strong profanities profaning the Name of Jesus. NANCY DREW AND THE HIDDEN STAIRCASE may not be ideal for younger children.