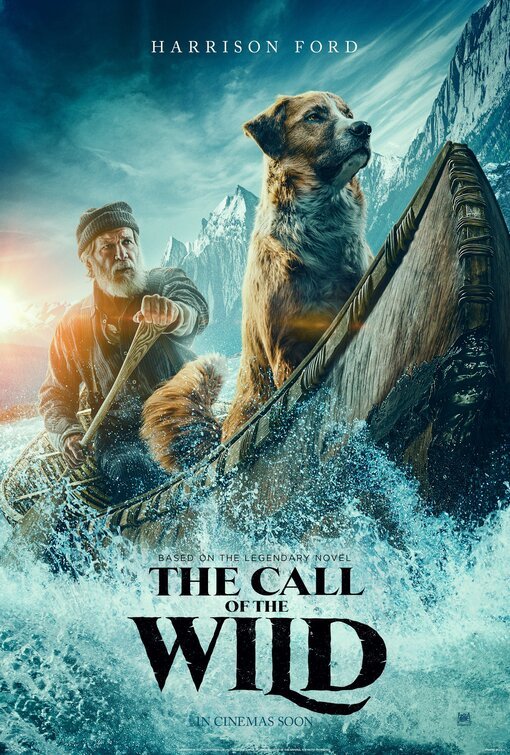 Based on Jack London’s classic book, CALL OF THE WILD comes to the big screen again. A Saint Bernard, collie mix, Buck lives a privileged life on a farm, but when he’s stolen and taken to Alaska, his life changes forever. He finds that not everyone is kind and that even other dogs can be brutal. When he’s placed on a dogsled team that delivers mail, he stands up to an alpha dog that’s hurting the other dogs. Will Buck be able to take control and show the others the companionship they deserve?

(RoRo, B, EE, Pa, L, VV, N, AA, M):
Dominant Worldview and Other Worldview Content/Elements:
Strong Romantic worldview as characters wander the wilderness in search of adventure and the pursuit of destiny/calling, dog follows his instincts based on a manifestation of a spiritual black wolf that leads him in the right direction by speaking to his inner wildness, with some environmentalist elements that communicate the importance of respecting nature in its raw form, some pagan elements with references to ancestors and how ancestors set the foundation for current times, some revisionist history, and some moral elements stress helping others, caring for others and being compassionate, and the dog even serves as a psychologist at times
Foul Language:
Two light obscenities, and a few times characters say, “Son of a” but then trail off and don’t finish the phrase
Violence:
Moderate amount of action violence, dogs get hit with whips and clubs, man gets hit in a bar fight, gunshots fired and end up hitting a character that leads to his death, lantern stars a fire that eventually kills a man trapped inside a cabin, avalanche threatens the safety of a dogsled team but they end up being okay, two dogs get into a fight that wounds both of them, and blood depicted when character gets a scratch and is shot
Sex:
No sex
Nudity:
Upper male nudity when a character wades in a creek
Alcohol Use:
Character uses alcohol to drown his sorrows, but a dog rebukes his love for alcohol and ends up showing him that alcohol won’t heal his wounds
Smoking and/or Drug Use and Abuse:
No smoking or drugs; and,
Miscellaneous Immorality:
Greed, evil white men and envy.

Based on Jack London’s classic book, CALL OF THE WILD comes to the big screen again in the story about a large stolen dog that has to re-discover his animal nature and survive the harsh wilderness and evil men. CALL OF THE WILD is fast-paced and entertaining but has a mixed worldview, with a positive character caring for and helping others, though, ultimately, the movie and the book stress returning to primal nature rather than civilization.

CALL OF THE WILD follows Buck, a huge dog with a lot of energy. Buck is the Judge’s dog. He’s a bit out of control, running through the town and eating all the food at the celebratory banquet. That night, when he’s sleeping outside, a man lures him into a cage to sell him for money. The man is able to steal Buck and take him all the way to Alaska.

When Buck arrives, he meets John Thornton in passing, and John can see compassion in Buck. Buck is sold to a dogsled team that delivers mail. The team leader is a tough alpha dog named Spitz. Spitz is very mean to all the other dogs of the pack, but Buck shows compassion and a caring nature towards them. Soon, the other dogs start to trust Buck more, and a rivalry develops between Spitz and Buck. Buck starts to see visions of a black wolf that’s leading him in different pivotal moments.

CALL OF THE WILD has a mixed worldview of morality and natural mysticism. The main character, Buck, is very caring and compassionate toward others. He is a good representation of an animal companion, who even serves as a psychologist at times. The movie also tells humans to treat animals with respect and dignity. Eventually, though, Buck sees a vision of a wolf that’s leading him into nature and back to his wild ancestors. Ultimately, the movie and the book emphasize going back to primal nature rather than civilization. There are several revisionist historical elements, that will give children the wrong idea about the time period and place, and the villain is a rich white guy. Also, CALL OF THE WILD has some scary parts that might frighten younger children, including dogs fighting and humans being vicious with dogs.

CALL OF THE WILD is a well-made movie that’s entertaining for the most part, but in some parts of the movie there is no villain and no jeopardy, although the thief, another dog, and a rich gold dude setting out to find gold, and others, all serve as villains . The movie does have a good bit of CGI, including the dogs done in CGI, which is a bit distracting. Audiences may not feel as emotionally connected with the dog in terms of empathy, because of the fact so much of him is CGI generated. That said, the movie is edited well, fast paced and highly entertaining.