"No Honor Among Thieves" 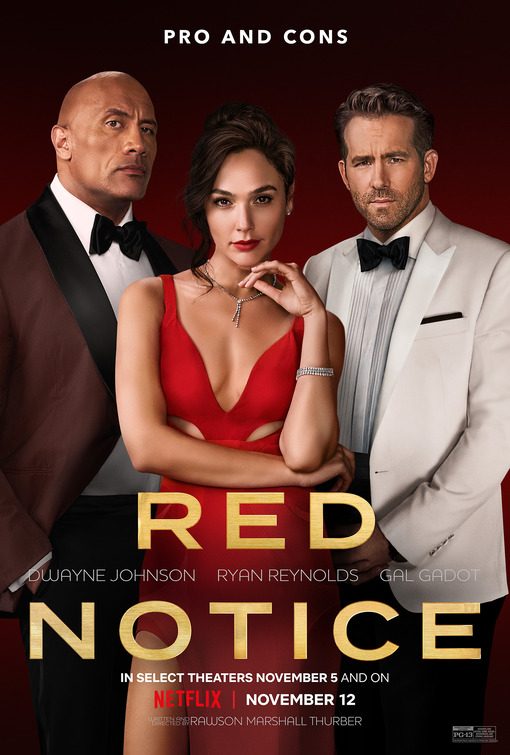 RED NOTICE is a heist thriller in theaters and on Netflix. FBI Agent John Hartley helps Interpol capture Nolan Booth, an art thief who stole one of three golden eggs once owned by Cleopatra. After Nolan is arrested, though, a top female art thief known only as The Bishop steals the egg out from under their noses and sells it to an arms dealer who already has one egg. The Bishop also frames John as her partner in the heist. So, John reluctantly teams up with Nolan to clear his name, in exchange for helping Nolan steal back the egg.

RED NOTICE is a lusciously photographed, funny, exciting heist thriller. The movie features three major stars in the lead roles. All three stars bring their “A Game” to the project. Although Interpol and a museum end up with all three Cleopatra eggs, the thieves get away with some ill-gotten gains from their stealing, earning millions of dollars. They accomplish this by betraying and double-crossing people. RED NOTICE also has some strong foul language, a few crude jokes and lots of strong action violence.

(PaPa, B, P, LLL, VV, S, N, A, MM):
Dominant Worldview and Other Worldview Content/Elements:
Strong, slightly mixed pagan worldview where thieves get away with selling stolen goods for millions of dollars, although the international police force and a museum end up with getting the stolen goods back
Foul Language:
At least 29 obscenities (including one “f” word), two Jesus profanities, three GD profanities, and four light profanities
Violence:
Lots of strong action violence, and other violence includes machine gun battles and gunfights including during a chase scene in a cave between Interpol officers and two thieves working with an adventurer, a foot chase with lots of climbing on tall precarious things, and some falling, two men fight over a small brown backpack carrying a precious golden artifact, framed FBI agent and an art thief are shot at and hit by prison guards, a car crash, and some miscellaneous fighting
Sex:
A few sarcastic, crude jokes about things like male organ size and bestiality
Nudity:
Some upper male nudity (including in prison shower scene), plus some female cleavage, and two or so kisses
Alcohol Use:
Brief alcohol use
Smoking and/or Drug Use and Abuse:
No smoking or drugs; and,
Miscellaneous Immorality:
Stealing, getting away with stealing, deceiving and double-crossing other people, escaping from prison, betrayal.

RED NOTICE is a heist thriller in theaters and on Netflix about an FBI agent who teams up with a high-class art thief to capture a rival art thief who framed the FBI agent for her own theft of a golden artifact created for Cleopatra. RED NOTICE is highly entertaining and funny, but it contains strong foul language, a few crude jokes, and the thieves get away with earning some illicit money, though the police retrieve some stolen goods and arrest a major international criminal.

The movie opens with FBI Agent John Hartley (Dwayne Johnson) working with a female Interpol agent named Inspector Das to protect a large golden egg in a museum in Rome. John tells Das that the egg may already have been stolen by the second best art thief in the world, a man named Nolan Booth, played by Ryan Reynolds (DEADPOOL and FREE GUY). The golden egg was one of three eggs that Antony gave to Cleopatra. A notorious arms dealer reportedly owns one of the eggs, and the second egg is in the museum, but no one knows where the third egg is.

When John and Das get to the museum’s display for the egg, it looks like the egg is still there. John is suspicious, however. So, he grabs a Coke from a little boy standing nearby and pours it over the egg, which dissolves the fake gold surrounding the object. John looks around at the onlookers and sees Nolan Booth watching him. Nolan also seems to be carrying a little brown backpack. A long chase ensues, but Nolan gets away with the backpack carrying the real Cleopatra egg.

A few weeks or months later, John and Inspector Das, along with an Interpol SWAT team, show up at Nolan’s secret base in the Caribbean. They arrest Nolan and reclaim possession of the priceless egg. However, when the egg is placed in a van to carry it to the airport and back to Rome, the biggest art thief in the world, a beautiful woman called The Bishop (played by Gal Gadot of the new WONDER WOMAN movies), steals the egg out from under everyone’s noses.

Shortly thereafter, Inspector Das arrests John, because several million dollars have appeared in a bank account in the Cayman Islands under his name. Also, Das contacted the FBI, and they claimed they’ve never heard of John. John protests the arrest, claiming that The Bishop has framed him, but Inspector Das isn’t buying it. She sends John to a remote Russian prison in Siberia. As luck would have it, that’s also where Das sent Nolan after Interpol arrested him.

In the prison cafeteria, Nolan outs John as a policeman. This starts a fight, and the warden places John and Nolan on a hard labor detail outdoors in the cold.

John and Nolan get to talking. Besides being an experienced art thief, Nolan is also an escape artist. He plans to escape from the prison and take back the egg stolen by The Bishop, who probably has sold it already to an arms dealer who already owns the first egg. John offers to help Nolan escape and steal back the egg so that he can go after The Bishop, arrest her and clear his name.

Escaping the prison turns out to be harder than Nolan thinks. They just barely make it, whole being fired at by prison guards wielding machine guns and a hand-held missile launcher. They end up at a swanky, invitation-only party being held by the arms dealer, who now has two eggs. However, The Bishop is also at the party, and she’s being pretty chummy with the arms dealer. It also turns out that Nolan thinks he knows where the third egg might be located. He hopes to steal the two eggs, find the third egg and sell all three eggs to an even bigger international criminal, who wants to pay Nolan (or anyone else for that matter) millions of dollars for the eggs, as a birthday gift to his daughter.

More twists and double-crosses occur. Will The Bishop turn the tables again on Nolan, who’s jealous of her success? Will John clear his name?

RED NOTICE is a lusciously photographed, funny, exciting heist thriller. All the three stars bring their “A Game” to the project. Ryan Reynolds brings his usual comic panache to the movie and doesn’t wear out his welcome. For example, when Most of his lines are funny and land smoothly, but there are a few crude or lewd jokes. Though John and the Interpol agent are the butt of some of his character’s jokes, John gives as good as he gets. Also, the Interpol agent has a heroic, dogged determination and manages to retrieve all three eggs from the thieves and would-be thieves.

However, the thieves get away with some ill-gotten gains from their stealing, in the form of millions of dollars. Part of their success comes from deceiving and betraying other people. So, at the end, the movie proves the old adage that “there’s no honor among thieves.” This violates MOVIEGUIDE®’s principle, based on the Bible’s condemnation of stealing, that a heist movie should not let the thieves get away scot free with their crimes or being rewarded for stealing. A heist movie or crime drama should show the thieves being arrested or even killed (especially if they kill or murder someone during their crimes), losing the stolen goods in some way (as in the classic 1960 “Rat Pack” movie OCEAN’S ELEVEN), or being punished, getting their “comeuppance,” in some other way (which is sort of what happens to Ben Affleck’s character in the acclaimed 2010 heist movie THE TOWN). RED NOTICE also contains a fair amount of foul language, including an “f” word and several strong profanities, as well as a few crude jokes and lots of strong action violence.