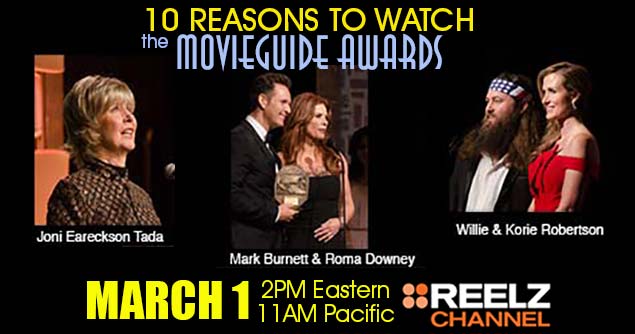 1. It’s the most family-friendly clean and inspiring awards show of the year and includes $350,000 in prize money for faith inspiring movies and television programs.

5. It honors the movies families like best such as FROZEN, DESPICABLE ME 2, and THE CROODS rather than the R-rated movies prominent on other awards shows.

6. It features Mark Burnett and Roma Downey who made the hit series THE BIBLE for the History Channel last year and who are releasing SON OF GOD in theaters Friday.

10. The media shapes the culture. When you vote for entertainment that honors God, you are voting to leave your children and grandchildren a more godly, civil society.

Help us to take on the goliath and win the culture for the future of your children and grandchildren.

This year’s star studded Gala is hosted by actor-comedian, Bill Engvall, with appearances by, among others, “Duck Dynasty” stars, Korie and Willie Robertson, The Bible’s Roma Downey and Mark Burnett, and emotional performances by Billy Ray Cyrus, and Joni Eareckson Tada, who exclusively performs for us the Oscar nominated yet disqualified song, “Alone Yet Not Alone”.

To find out what channel The Movieguide Awards will be on in your area, click here.