An Animated Classic Comes to the Big Screen 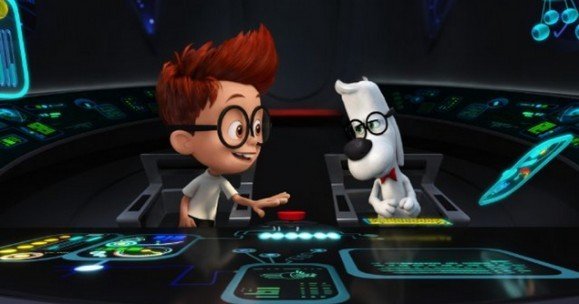 MR. PEABODY AND SHERMAN are coming to the big screen! The original cartoon has been around for over 59 years, with most episodes lasting only six minutes, so making it a feature-length movie is a big deal.

Not only was Mr. Peabody a very popular show, it taught kids great lessons on history. As the story goes, Mr. Peabody is a genius dog who has adopted a little boy named Sherman. Mr Peabody has a machine to take him back in time, called “the way back machine.” Mr. Peabody decides to take Sherman along with him on his adventures to teach him about history, but they get into all sorts of crazy, funny and exciting adventures along the way.

Putting the adventures of Mr. Peabody and Sherman in to one cohesive story was tough because they travel all over the map through history. In fact, the movie was first conceptualized in 2003, and the story line has changed several times in order to get it right.

One thing MR PEABODY AND SHERMAN must do is reach new young audiences and also reach older fans. To help explain “the way back machine” machine to new audiences, Sherman makes a friend, Penny, who doesn’t know anything about it. When Penny and Sherman get into an argument, Sherman shows Penny the machine to prove his point. Penny is a bit of a rebellious girl and turns “the way back machine” on, and the adventures begin.

Movieguide® saw a clip of the new movie at Comic-Con. In the scene shown there, Mr. Peabody and Sherman escape the guillotine in the French Revolution and battle the evil dictator Robespierre. Despite the cartoon antics, the scene showed that the movie might be a fun history lesson for real children, not just Sherman.

Check back with Movieguide® for the full review before MR. PEABODY AND SHERMAN comes to theaters on March 7, 2014