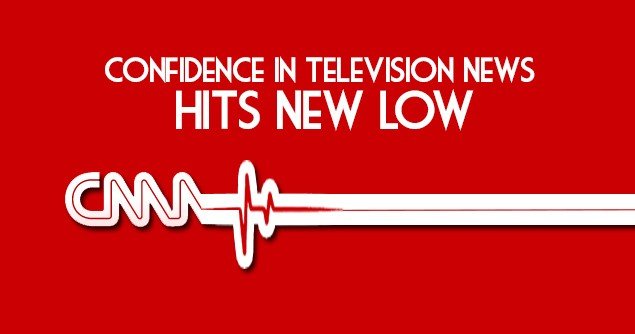 A June 2014 Gallup survey on American confidence in various institutions shows that television news has hit an all-time low of 18 percent – falling from 46 percent confidence in 1993.

Confidence in the Christian Church, however, has fallen more modestly from 53 percent to 45 percent in the same time period – understandable because of the church’s ineffectiveness at reversing some of our current moral decline.

Meanwhile, confidence in the military actually rose from 68 percent to 74 percent during the period. As could be expected, people trust small business three times more than big business (62 percent to 21 percent). The presidency has fallen from 72 percent confidence in 1991 to 29 percent today. Congress brings up the absolute rear of all institutions with a meager 7 percent level of trust, but incumbents continue to get reelected because Americans like to blame other Congressional representatives rather than their own.

Another Gallup survey found the two issues Americans were most concerned about were: 1) the economy; and, 2) federal spending and the budget deficit. Favorite topics among TV news leaders, such as climate change and race relations, garnered the least concern of the options given in the survey.

“The size and power of the Federal government” topped the concerns of Republicans at 67 percent. The affordability of healthcare topped Democrat concerns, but that concern was equally shared by Republicans. Thus, 57 percent of both groups considered it a major concern. Finally, Democrats were almost four times more likely to be concerned about climate change, but it was still low on their list.

Clearly, the producers of the major network news programs are to the left of the typical American Democrat. More Democrats are actually concerned about the availability of affordable energy than Republicans. People from both parties are more concerned about the price of gas and heating oil than how to transition from fossil fuels to windmills.

Even Democrats are more concerned about Federal spending and deficits than they are climate change.

To top things off, if Barack Obama was a Conservative Republican, the media would have had him impeached long before now for his use of the IRS against his enemies, his dishonesty about Benghazi and Obamacare, and his extreme expansion of executive power without Constitutional authority.

America’s Founding Fathers considered a free press to be a vital part of keeping government in check. The failure of television news to do its job in this regard is a key reason public trust in the news media has dropped to an all time low.