The Girl of His Dreams 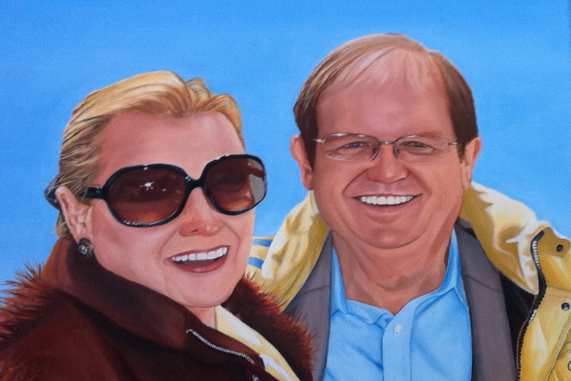 February is the month of love. As Christians, we know that God is the author of romance. In Genesis, the Lord realized man’s need for a partner . . . It is not good for man to live alone, so I will create a helpmate for him. February seems an appropriate time to share the beautiful love story of MOVIEGUIDE® founders ¾Ted and Lili Baehr. It will not surprise you that their romantic love story rivals as any movie you have ever seen!

The Girl of His Dreams

“Beautiful dreamer, wake unto me,

Starlight and dewdrop are waiting for thee!”

Fresh out of law school, Ted Baehr turned down a lucrative position at a prominent New York City law firm to produce a movie from screenplay he had written that the President of Paramount Pictures had offered to buy and produce at a significant price. But Ted, having grown up in the Entertainment Industry as the son of Hollywood Cowboy Star Bob “Tex” Allen (Theodore Baehr) and MGM star Evelyn Peirce, chose adventure over money and security.

And then one night, Ted’s life was transformed by an unforgettable dream in which he met an extraordinary woman.

Over the next few months, Ted couldn’t get the ethereal blonde out of his head, as she continued to appear in his dreams with incredible clarity. Frequently, he shared his dream with his business partner and friends and described the woman in perfect detail.

A year later, at the prestigious office of the father of his girlfriend of the moment in Houston, Texas, his partner was waiting for him at the door with exciting news. “I’ve found her¾the woman in your dreams!”

“Her name is Lili and she’s a Texas socialite and an accomplished architect,” his partner continued. “According to her co-workers, her face has graced the covers of magazines. Artists have painted her and one of them made casts of her face, which are displayed in museums!

Ted invited her to dinner as his friend’s date. To the surprise of Ted and especially to the shock of his partner, Lili accepted with enthusiasm.

Sitting across from this exquisite creature, Lili, at the restaurant that night, Ted discovered that she also had a beautiful soul.

A week later, as they drove across Texas, the scene in Ted’s dreams occurred.

Sometime after that, Lili said yes to the man of her dreams! And so, they lived happily ever after.

Ted and Lili’s story, including many other miraculous love stories, can be found in A Match Made in Heaven, by Susan Wales and Ann Platz, available on www.amazon.com. Perhaps you have never found love, or maybe you have loved and lost special someone? Then Ted and Lili’s story and other stories found A Match Made in Heaven, will greatly encourage you. These stories truly attest that God is indeed a matchmaker!