A BRIEF HISTORY OF TIME 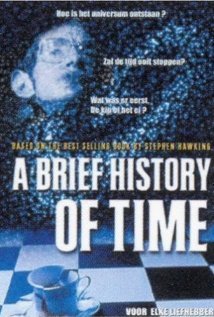 A BRIEF HISTORY IN TIME is a fascinating documentary about Stephen Hawking, the brilliant physicist who can barely move because of Lou Gehrig's disease. Hawking's speculations about the universe are challenging, although his brilliance sputters as he approaches the most basic truth: "In the beginning, God created the heavens and the earth." (Genesis 1:1) Even so, the movie is an inspiration to make the most of our numbered days.

(H, B) Naturalistically slanted observations on the origin of the universe. Inspiring portrait of achievement in the face of adversity.

A BRIEF HISTORY IN TIME is a fascinating documentary about Stephen Hawking, the brilliant physicist who has Lou Gehrig’s disease. Hawking occupies the mathematics professorship at Cambridge University once held by Isaac Newton. In the film, Director Errol Morris explores Hawking’s story and his speculations about the universe. In his youth, Hawking chose theoretical physics because he didn’t want to bother learning any more facts than necessary. However, troubled by a loss of coordination at 21, he learned he had Lou Gehrig’s Disease, which robs its victims of the ability to move, without loss of intellect. Given 30 months to live, Hawking plunged into an analysis of the ultimate questions about the universe.

A BRIEF HISTORY IN TIME continues through the eyes of family, friends and co-workers, as Hawking ponders whether the universe has a purpose, limits and a Designer. His brilliance sputters as he approaches the Truth, and even after 30 years, Hawking rejects God. Even so, Hawking inspires us to make the most of our days on earth, and we should pray that this genius would become like a little child before God, as his prolonged reprieve from ALS continues.

Rent or Buy A BRIEF HISTORY OF TIME: