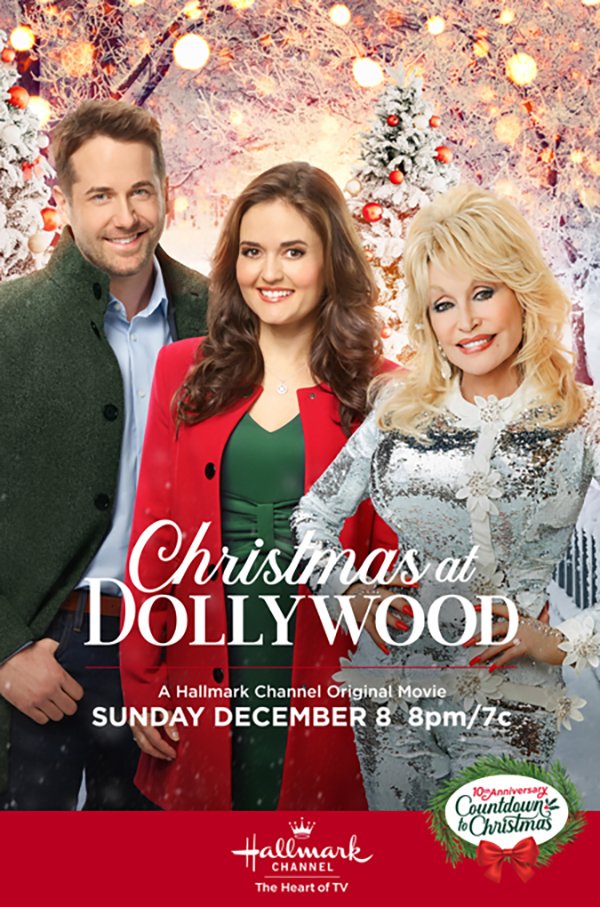 CHRISTMAS AT DOLLYWOOD is a classic Christmas romance for television, where the two romantic leads find themselves working together. Rachel, an event planner and single mother, returns to her hometown of Pigeon Forge, Tennessee to interview for a job at Dollywood. A friend tells Rachel she’s caught the eye of Dolly Parton, because, at the last minute, she needs someone to plan Dollywood’s 30-year anniversary Smokey Mountain Christmas party. Rachel gets the job and teams up with Luke, the park’s Director of Operations, to make the event bigger than ever. Rachel begins to invite Luke to family events and hang out with her daughter. While putting the party together, they run into problems, however.

CHRISTMAS AT DOLLYWOOD is heartwarming and fun. It’s nice see a man love his girlfriend’s child as he would his own. The movie has a strong Christian, moral worldview. There are a few Christ-centered Christmas carols. Also, the movie shows the importance of family, having faith things will work out and trying to be stress free around the holidays. CHRISTMAS AT DOLLYWOOD is a worthwhile movie for the whole family.

(CC, BB, A):
Dominant Worldview and Other Worldview Content/Elements:
Strong Christian, moral worldview as two Christ-centered Christmas Carols we sung. Biblical worldview depicted with love and affection for family and the importance of family. One conversation about being stress free and having faith that everything would work out
Foul Language:
No foul language
Violence:
No violence
Sex:
No sexual immorality, with a couple kissing twice and holding hands once
Nudity:
No nudity;
Alcohol Use:
Some light casual drinking
Smoking and/or Drug Use and Abuse:
No smoking or drugs; and,
Miscellaneous Immorality:
Nothing else objectionable.

CHRISTMAS AT DOLLYWOOD follows Rachel, an event planner and single mother, back to her hometown of Pigeon Forge, Tennessee to plan the 30-year anniversary of Dollywood’s Smokey Mountain Christmas, where she teams up with Luke, the park’s new Director of Operations, to make the event bigger than ever. CHRISTMAS AT DOLLYWOOD is fun and heartwarming, with a strong Christian, moral worldview and no objectionable content.

The movie open at a Christmas fashion show in New York City. Rachel is the brains behind the event and expects her boss to give her another event when this one’s is over. Her boss gives her the holidays off, so Rachel decides to grab dinner the next evening with a friend from home.

The dinner with her old friend ends up being a business meeting. The friend says Rachel has caught the eye of Dolly Parton because Dolly’s event planner just fell through, so they need someone to plan Dollywood’s 30-year anniversary Smokey Mountain Christmas party. Rachel decides to interview for the job. She’s also excited to take her daughter home to her family for Christmas for the first time.

After arriving at the park, she checks out the area and decorations where the party will be held. While there, she meets a man and starts speaking out loud about the improvements that could be made. She ends up leaving shortly afterwards to make it to her interview.

Rachel arrives at the office for the interview, and she ends up formally meeting the man she was just talking to about improvements. Luke, the park’s Director of Operations, was also there interviewing for the General Manager job. She didn’t know that at the time and thought they were both competing for the event planner job.

The next day, Rachel and Luke find themselves both back at the office. Rachel gets the Dollywood party planning job, and the board gives Luke the job to help her. Now, the two of them have only six days to plan the 30th anniversary party, while Rachel is also trying to squeeze holiday time in with her family and daughter.

When Rachel and Luke start forming a friendship outside of work, Rachel begins to invite him to family events and to hang out with her daughter. While finishing putting the huge party together, however, they run into some problems. Will they pull the party off and impress the staff, media and, more importantly, Dolly herself?

CHRISTMAS AT DOLLYWOOD is a classic Christmas movie where the two leads find themselves working together for a common goal. All the while, they’re falling in love and spending more and more time with one another. The movie is heartwarming and fun. Also, it’s nice to see a man love a child as he would his own child.

CHRISTMAS AT DOLLYWOOD has a strong Christian, moral worldview. There are a few Christ-centered Christmas carols Christians will recognize. Also, the movie shows the importance of family, having faith that things will work out and trying to be stress free around the Christmas holidays. CHRISTMAS AT DOLLYWOOD is a worthwhile movie for the whole family.