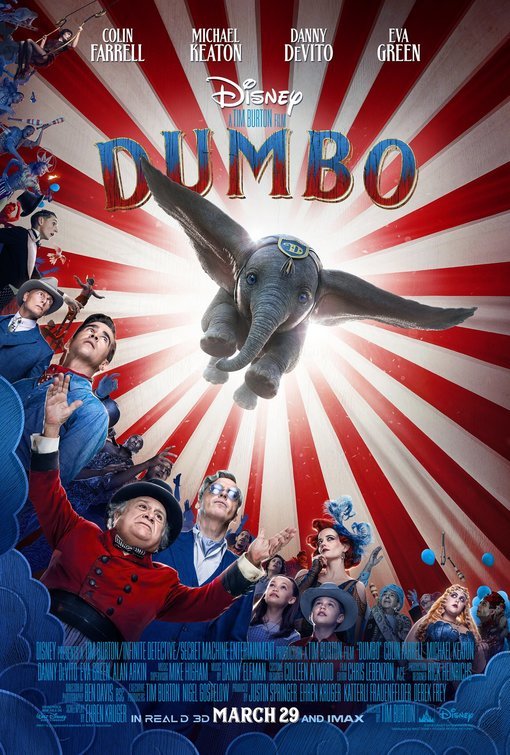 Set in the early 1900s, DUMBO follows performers in the Medici Brothers’ Circus. One day a new elephant addition to the circus gives birth to a baby named Dumbo who has oddly large ears that prompt ridicule. The Medici Circus is on the breach of shutting down forever. However, when two children care for Dumbo, they discover Dumbo’s extraordinary talent to fly. Dumbo’s ability could save the circus and bring everyone’s future to new heights.

Directed by Tim Burton, this version of DUMBO is beautifully made. Burton has done a great job expanding the story and making the story interesting, but not as dark as many of his other movies. The movie still has the feel, tone and quirkiness of a Tim Burton movie. It also has a strong moral worldview about the need for family that will leave audiences crying, laughing and smiling. There are some light environmental elements, but they mostly show that human beings have a duty to take care of animals. DUMBO is appropriate for all ages, though very young children may get scared by the story’s suspenseful moments.

(BBB, C, FR, E, N, M):
Dominant Worldview and Other Worldview Content/Elements:
Very strong moral worldview reflects biblical Christian values with an emphasis on family, protection and care for others, mentions of miracles, a Hindu character mentions how animals factor into his religion, but the moment only takes up one line a dialogue, environmental elements present which support the idea that humans should take care of animals with respect, young female character shows an interest in science but her desire for scientific discoveries speaks to a sense of wonder rather than stark naturalism
Foul Language:
No foul language
Violence:
Mean-spirited animal handler upsets Mother Jumbo, but no animal abuse is depicted, one character dies but audiences only see his body get covered, and circus grounds burn down, which may frighten younger viewers
Sex:
No sex
Nudity:
Upper male nudity and female characters wear circus costumes that sometimes show cleavage
Alcohol Use:
No alcohol
Smoking and/or Drug Use and Abuse:
No smoking or drugs;
Miscellaneous Immorality:
Greed, anger, deceit, but rebuked.