"Well Made Propaganda, But a Lie Nonetheless" 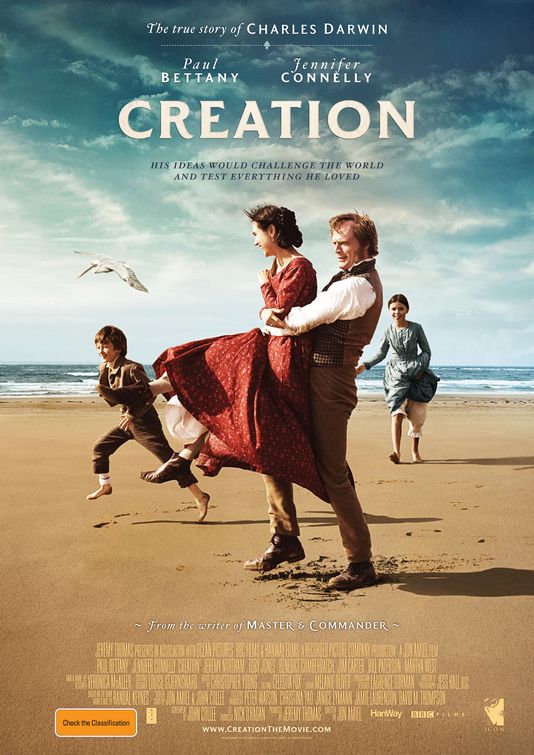 CREATION is the story of Charles Darwin and his struggle to write the book that presented his theory of evolution. Charles and his wife Emma are opposites, and the story centers on their marriage. Charles believes that nature created itself over millions of years. Emma is a believer in God, however. Her husband’s ideas cause strife and struggle in their marriage. Darwin suffers from ill health because he believes there is no God and knows that, if he publishes the book, he will “kill God.” Charles decides to finish the book, even turning his wife into a convert for evolution.

CREATION is a beautifully made, poignant movie that is very emotionally moving. With a tragic loss of his eldest daughter and suffering from poor health, Darwin becomes an underdog for whom viewers are supposed to root. The fact that the movie is so well done is what makes it very dangerous. Manure, nicely wrapped with a bow, is still manure. A lie that there is no God and that somehow we have randomly shown up here on Earth as an accident is still a lie, even if it’s well written and acted.

Despite its title, CREATION is the story of evolution’s founding father Charles Darwin and his struggle to write the book that presented his theory of evolution. Charles and his wife Emma are opposites as a couple, and the story centers on their marriage. Charles has come to not believe in God and sees that nature over millions of years created itself and is changing our world. Emma is a devout believer in God. Her husband’s ideas cause strife and struggle in their marriage. Emma tells Charles that, if he writes the book, he will not enter Heaven.

Moving forward and backward in time, the movie reveals that their late, eldest daughter, Annie, was a true student of her father, even teaching the younger children that a fox must kill a rabbit so that the fox’s babies can live. She is forced to kneel in rock salt at church school because she said that dinosaurs existed millions of years ago. Tragically, young Annie dies. Before she does, Charles asks God to heal her. Charles promises God that he will follow Him if He lets her live, but Annie dies. This is part of what shaped Charles’ thinking. We get inside of Charles’ mind as he images his dead daughter talking to him and challenging him to write the book.

Because Charles and Emma are first cousins, Charles rationalizes that they “inbred” too closely, and this caused weak offspring. He starts to see everything in terms of natural selection.

However, Charles is distraught and suffers from bad health because he believes there is no God, and he knows that if he publishes the book he will “kill God.” His friend Thomas Huxley tells him that famous phrase and adds that its time that we all were “done with Him.”

Charles regains his health when he decides to finish the book after all. He gives it to his wife to read. She does and then tells him that she agrees with him and that the book should be published. She says that she now is “an accomplice” and adds, “May God forgive us both.”

CREATION is a beautifully made, poignant movie that is very emotional and moving. The filmmakers have done a great job of painting Darwin as a man reluctant to “kill God,” thereby creating empathy for him. Add in a tragic loss of his child and suffering from poor health, and the movie turns Darwin into something of a “Rocky” underdog for whom viewers are supposed to root. When Darwin decides to be true to his convictions, the filmmakers have very adeptly made it be that his decision to write the book is a turning point for him and for all of the world.

The fact that the movie is so well done is what makes it the most dangerous. Mud, nicely wrapped with a bow, is still mud. A lie that there is no God and that somehow we have randomly shown up here on Earth as an accident is still a lie, even if it’s well written and well acted.

There is a constant discussion of science vs. religion and evolution as the only rational truth. This is a one-sided bit of propaganda, however, because there is much that is not said. For instance, evolutionists have yet to produce any tangible evidence of intermediary species, that is, evidence that an ape turned into a human. Scientists should have found thousands upon thousands of transitional forms in the fossil record, if Darwinism were true, but such fossils have not been found. Therefore, Darwinism is clearly false.

Also, the movie does not mention that in his book, THE ORIGIN OF SPECIES, Darwin Darwin wrote about the human eye, “To suppose that the eye with all its inimitable contrivances for adjusting the focus to different distances, for admitting different amounts of light, and for the correction of spherical and chromatic aberration, could have been formed by natural selection, seems, I freely confess, absurd in the highest degree.” Evolution scientists have never produced an adequate explanation for the creation of the human eye, much less for the human brain, the seat of rational human thought and the physical connection to our individual souls or spirits.

In addition, CREATION uses fallacious “straw men” arguments by crudely depicting the Christians in its story as closed minded, cruel people. This convenient kind of portrayal is a primary technique of ill-conceived propaganda movies like this one. Not only does it hurt the movie’s humanist, anti-Christian arguments in support of Charles Darwin and evolution theory, it’s also bad filmmaking.

The Charles Darwin depicted in the movie uses “teaching moments” with his children, telling them stories about Christian missionaries attempting to convert “savages” who only went back to being savages. This part of the movie seems slightly racist. After all, the subtitle of Darwin’s book is, “The Preservation of Favoured Races in the Struggle for Life.”

Another failure is the movie’s neglect to tell viewers that Darwin’s wife was actually a Unitarian. Unitarian beliefs are actually anti-Christian, unbiblical, and heretical, but they were widespread in England and parts of America at the time Darwin lived. Thus, in one sense, it was weakness in Emma’s own faith to begin with that led her to marry Darwin in the first place and eventually accept his false theory.

At one point in the movie, Darwin tells his sick child, Annie, the story of “Jenny,” an orangutan who died in the arms of the zookeeper, hugging the man just like a human would. Also, Darwin has visions of animals decomposing. From those occult visions, he gets the ideas of natural selection. He points out to his children the savagery in nature and the necessity for violence.

The true “missing link” for Darwin and his modern day disciples is that the world we see today suffers from the fall of mankind and subsequent curse of God. The world was not made to have the violence that it does, but the responsibility for that lies with our own nature as sinful people. God has made a way of salvation through Jesus Christ. Jesus is healing the human race and its broken relationship with God, through the power of the Holy Spirit. One day, He will return to complete that sacred, divine work.