EXIT THROUGH THE GIFT SHOP

"Sardonic Look at the Power of Hype" 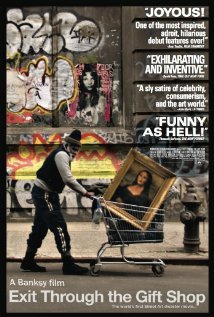 EXIT THROUGH THE GIFT SHOP is an insightful and engaging documentary about graffiti artists and the power of hype to transform these vandals into mainstream artists. The story focuses on Thierry Guetta, an eccentric French shopkeeper who follows around a group of street artists, documenting them with his camera. After years of filming, Thierry also becomes a street artist. He sells his shop, puts a triple mortgage on his home, and hires a team of artists to put together a gallery show of their artwork. Thierry hypes the gallery show, commercializes it, and is now one of the most sought-after pop art creators in today’s art world.

EXIT THROUGH THE GIFT SHOP is an engaging satirical look at the line between art and pop culture commercialism. It is an amazing social commentary on the power of hype. The content, however, contains an overall theme of vandalism purloined as art. It also has some foul language and worldview problems, including some homosexual artwork and some sacrilegious artwork of Jesus. So extreme caution is required. Older audiences, however, may find the movie’s social commentary on over-hyped, over-commercialized art to be entertaining and educational.

EXIT THROUGH THE GIFT SHOP is an insightful and engaging documentary about graffiti artists and vandalism and the power of hype to transform these niche vandals into mainstream street artists.

Thierry Guetta, an eccentric French shopkeeper, has an obsession with his video camera. He records everything. From his daily shaving routine to his children’s birthdays, Thierry can’t stop using his camera. When he meets a group of graffiti vandals, or, as they call themselves, street artists, Thierry follows them, telling them he is a documentary filmmaker who wants to tell their story.

For years, Thierry follows all of the major street artists around the world. He captures their greatest pieces of art, from an artist named Space Invader who tags buildings with video game characters to Shepard Fairey whose iconic “obey” campaign is seen on street signs and billboards worldwide. The only artist Thierry cannot video is the elusive Banksy, whose street art has been found on some of the most iconic structures in the world, including Jerusalem’s Western Wall.

Through a series of happenstance, Thierry finally gets to meet Banksy on one condition that he never films Banksy’s face. The two become fast friends as Thierry continues to collect thousands of hours of video footage. Eventually, Banksy learns Thierry is not really a filmmaker. Banksy asks Thierry for all his video footage. Thierry willingly obliges. With nothing more to shoot, Thierry gets bored and tries his hand at vandalism, um “street art,” as well. Banksy encourages Thierry to do what he and other artists have done to put together a small gallery show and try to sell some of his artwork while Banksy edits the film.

Thierry’s compulsive behavior takes over again. This time, he sells his shop, puts a triple mortgage on his home, and hires a team of artists to create a massive library of street art in order to have the biggest street art gallery in Los Angeles. He hypes it up in all the local papers and news venues. Soon, thousands are flocking to Thierry’s street art gallery and buying up his collection for millions of dollars. While the other artists feel Thierry has betrayed the street art code and commercialized it, Thierry proves that the power of hype and media blitz can be an incredible thing. Now, Thierry is one of the most sought-after pop art creators of contemporary culture.

EXIT THROUGH THE GIFT SHOP is an engaging, interesting satirical look at the fine line between art and commercialism. The movie is well edited and clear, considering the thousands of hours of Thierry’s footage that Banksy had to sort through. The movie is a powerful commentary on the power of hype and the sway that commercialism has on our current culture. The fact that these other “street artists” travel the world for years and years posting their graffiti messages until they gain enough recognition to have a small gallery showing, but then Thierry turns the whole operation into a mainstream sales endeavor, thereby becoming one of the most sought after contemporary street artists is hilarious. The social commentary makes the entire 88-minute movie an enjoyable commentary on the power of hype.

The movie’s content contains an overall theme of vandalism purloined as art, and it also has some foul language and some worldview problems, including some homosexual artwork and some sacrilegious artwork of Christ. So, extreme caution is required. However, none of the content is excessive. Therefore, discerning older viewers may find the movie’s social commentary to be satirically entertaining and educational.