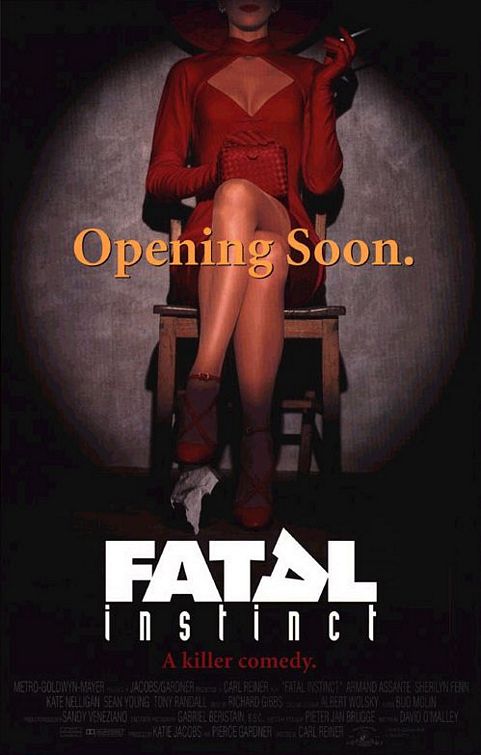 In the silly movie FATAL INSTINCT, director Carl Reiner spoofs numerous erotic thrillers, including the two super titillating thrillers: BASIC INSTINCT and FATAL ATTRACTION along with DOUBLE INDEMNITY. One gag follows another in rapid succession in this film where attorney and cop Ned Ravine seeks to serve the law and see that justice is done. Ravine thinks he’s sharp, but his gullibility, especially with women, is obvious. He has three women in his life: his wife, Lana, who is plotting with her auto mechanic lover, Frank, to kill him; his secretary, Laura, who loves him, but he doesn’t know it; and, new interest, Lola, who seeks legal advice. In an extremely funny scene early in the film, Lana explains the murder plan to Frank. He thinks she has planned it for some time, but she tells him: “No, it just came to me,” as she pulls various levers so screens will come down with “the plan” on them and outlines Ravine’s route to another city.

The movie is fairly well crafted and is humorous. The actors turn in commendable comedic performances. However, the PG-13 rating is objectionable because the film contains sexual innuendo from beginning to end. So be forewarned about this movie despite its being a parody on earlier thrillers–the borderline between humor and good taste is very thin.