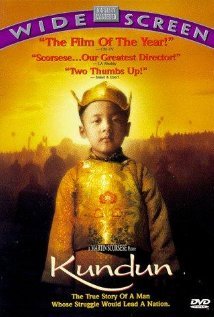 LAST TEMPTATION OF CHRIST director Martin Scorsese focuses his lens on the Dalai Lama, exiled from his native land by the Communist Chinese in KUNDUN. The movie begins in 1937 where a group of monks are searching for the 14th purported reincarnation of the Dalai Lama. A very selfish and demanding boy convinces the monks that he is the next Dalai Lama. The boy is given shining clothes and paraded through town to his palace, where he is told who he is, what is expected of him, and he is taught the tenants of Buddhism. Slowly, Mao’s Chinese Communist Army invades Tibet, and the young Lama must flee his impoverished country.

While Christians can relate to the Dalai Lama’s persecution, and some of his moral behaviors, they must realize that all similarities stop there. Neither Communism or Buddhism will liberate Tibet. Only Jesus Christ. Martin Scorsese has made a very picturesque movie, but the story is monotonous and repetitive. Must of the middle of the story involves a continuous series of the Dalai Lama sitting on his chair and having grave conversations with visitors. In THE LAST TEMPTATION OF CHRIST, Scorsese revised history and blasphemed the character of Christ; in KUNDUN, he celebrates the Dalai Lama.

(FR, AbAb, V, M) Buddhist worldview with many anti-Judeo-Christian elements & some moral elements of turning the other cheek, fornication rebuked & compassion; no foul language; mild violence including some war film footage, image of corpses & shooting & hostile take-over by Chinese; and, miscellaneous immorality including grotesque image of dead man cut up & fed to the vultures

In recent years, the entertainment pages report that the Tibetan Dalai Lama has been partying with some Hollywood’s biggest stars including Richard Gere and Harrison Ford and his wife, screenwriter Melissa Mathison. Perhaps, they feel a kinship with him because Buddhism in itself is an elitist, anthropocentric religious practice that extols the elite (who are closer to nirvana) and disdains the outcasts, the imperfect and the infirm. Often vain, grossly-over paid, cut-off-from-humanity Hollywood types may feel a kinship with a “significant” other – a purported reincarnation of Buddha. Now in the movie KUNDUN, LAST TEMPTATION OF CHRIST director Martin Scorsese focuses his lens on the 14th and currently living Dalai Lama, who is exiled from his native land, having been driven out by the Communist Chinese. Using non-actor, exiled Tibetans from all over the world, the boldly Buddhist movie was shot in Morocco and gives a beautifully photographed, but somewhat stale example of the classical hero’s journey from commoner through trials to exalted leader.

The movie begins in 1937 as a group of lamas are searching for the 14th re-incarnation of the Dalai Lama, four years after the death of the 13th. A very selfish and demanding boy insists that he sit in his father’s chair. This is enough to convince the monks to display a group of objects for the child’s inspection. One monk asks him to pick out the objects that belong to him. The child picks out only objects that belonged to the 13th Dalai Lama, and so he is selected as the next. The boy is given shining clothes and paraded through town to his palace, where he is told who he is, what is expected of him and is taught the tenants of Buddhism.

In addition to his indoctrination, the young Dalai Lama plays war games with soldiers, watches movies and spies on the commoners below with his telescope. At several points, the youth tells his teachers that he doubts he is the next Dalai Lama. He asks one teacher if he was sure he was picked correctly. This self-doubt is classic heroic stuff, but not the type of insecurity one would want from such a glorified leader. (Scorsese attributed the same insecurity to Jesus Christ in THE LAST TEMPTATION OF CHRIST which defamed the nature of God, who would be severely wanting if He didn’t know who He was and if He acted out of confusion and angst. However, the good news is that Jesus Christ is good and the same yesterday, today and tomorrow, so He is worthy of our trust and love.)

Slowly, Mao’s Chinese Communist Red Army begins ravaging Tibet, and the young Dalai Lama is left alone on the world stage. Though he was advised several times to resort to violence, he did not, and the Dalai Lama even visits Mao, who boasts about his need to liberate Tibet from the opiate of religion, which numbs the mind and enslaves the people who practice it. Eventually, when bombs are bursting all around him, the Dalai Lama decides he must flee the country with his advisors to India, where he can be safe and free to continue to lead his people in exile.

C.S. Lewis once said, “There is only one way, one truth, but there are some lies that are closer to the truth than others.” Many disillusioned people may watch this movie and think that Buddhism is truth. Some may argue, “He didn’t resort to violence, he was so peaceful, he was so compassionate. His religion must have merit.” While Christians can relate to the Dalai Lama’s persecution and some of his moral behaviors, they realize that all similarities stop there. At one time in the movie, Mao tells the Dalai Lama that he is the liberator of Tibet. The Dalai Lama tells Mao that he will liberate himself. They are both wrong. Jesus Christ is their liberator. Even now, reports come in from Tibet and China that His Church is flourishing despite severe persecution from the Tibetan Buddhists. On a final note, it was very bothersome to continually hear people refer to the Dalai Lama as Your Holiness, which means pure, undefiled and set-apart – something even the Dalai Lama has denied that he is. In fact, only the Lord Jesus Christ is holy and willing to give up his life to save even Mao and the Dalai Lama from their wicked ways.

Only the most ardent Martin Scorsese and Dalai Lama fans may make the effort to sit through this propaganda piece. Martin Scorsese has made a very picturesque movie, but the story is monotonous and repetitive. Most of the middle of the story involves a continuous series of the Dalai Lama sitting on his chair and having grave conversations with visitors. Occasionally, they transport the Dalai Lama from one fortress to another just for a change of scenery, but most of the time the movie is about him talking with his teachers and the Chinese. None of the actors are professional, and sometimes this is evident in their delivery and manner. In fact, the actor from SEVEN YEARS IN TIBET, seems much more convincing as a man of deep thoughts and feelings.

Without knowing what Buddhists will think of this film, it is very telling to compare this movie with THE LAST TEMPTATION OF CHRIST. In KUNDUN, the obvious attitude is that Scorsese is very sympathetic and reverential to his subject. Obviously, in THE LAST TEMPTATION OF CHRIST, he re-wrote the Bible, distorted the character of Christ and offended the Christian community. Let’s pray that Scorsese will discover the true Christ, the compassionate Christ who died and rose from the dead for Him and Tibet’s only liberator.