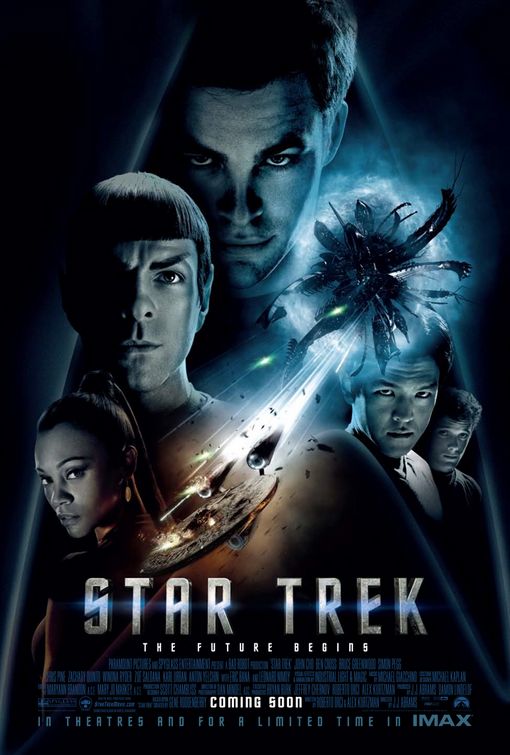 STAR TREK re-imagines the world of the original series by changing to an alternate space-time universe. Captain Kirk’s father dies at the hands of a vengeful Romulan captain named Nero, so Kirk grows up in Iowa as slightly rebellious. In fact, he steals the family’s antique corvette and drives it off a cliff. Then, he runs into conflicts with Mr. Spock at Star Fleet Academy. As a result, they suspend him for cheating, but his best friend, Dr. McCoy, sneaks him upon the new starship, the Enterprise, for its maiden voyage. They learn that Captain Nero is attacking Spock’s homeworld of Vulcan. One crisis leads to another. And, Kirk must eventually lead the crew against the seemingly invincible Nero.

STAR TREK is an exciting, entertaining, popcorn movie. The intensity never lets up, and the special effects are first-rate, but this is not the STAR TREK older generations remember. This new STAR TREK takes place in a more messy, amoral universe that honors cheating, rebellion and some immorality. That said, the movie does capture the essence of STAR TREK, with positive moral qualities, including heroes who sacrifice themselves to save others.

(BB, C, Pa, LL, VV, S, N, AA, MM) Strong moral worldview with loyalty, self-sacrifice to save others, stopping genocide, and mercy is offered to one’s enemy, plus one positive reference to faith, but marred by pagan, rebellious and immoral behavior, including a problematic cheating incident that becomes part of other references to cheating in the story; 10 obscenities and four profanities; strong intense action violence includes serious fight scenes, including holding somebody down and beating them several times, fighting with swords and guns, sword stabbed through the chest, stepping on people’s hands while they hang on the abyss, mechanical violence, and a bug that eats into the brain dropped into a man’s mouth; one interspecies sex scene with the parties partially clothed and kissing, plus several sexual innuendoes and other kissing; brief upper male nudity, women in skimpy underwear; serious alcohol use in one scene, with drunkenness; no smoking or illegal drug use; and, genocide by villain, character is injected with a virus to smuggle him aboard a spaceship through the sick bay, cheating occurs and is defended, information withheld, and lying occurs.

STAR TREK is an exciting, entertaining, popcorn movie, but it is not quite the STAR TREK the older generation remembers. In fact, it uses a back in time to an alternate TREK universe plot device to avoid continuing the TREK series and to literally start all over again with a wide-open future. This future includes characters who are not as moral nor as subtle as the original series but instead succeed in part by cheating, breaking rules, being rebellious, and even engaging in sexual relations. Even so, the movie does capture a lot of the essence of the original STAR TREK.

The movie opens with the vengeful Romulan Captain Nero coming back in time to destroy the planet Vulcan. In the process, he destroys the Federation Starship piloted by the father of Captain Kirk. Kirk’s pregnant wife escapes just in time and, in a very powerful scene, has the baby, James Tiberius Kirk, on the escape craft.

Without a father, this Captain Kirk grows up in Iowa as slightly rebellious. In fact, he steals the family’s antique corvette and drives it off a cliff, and then a few years later gets into a major bar fight with members of the Federation.

At the bar fight, Captain Pike challenges Kirk to join Star Fleet. Kirk does, in part because he’s smitten by Uhuru. When it comes to a big exam, however, he cheats, so he’s put on suspension by Spock.

The early life of Spock has been traced also in the movie. He grew up as half human and half Vulcan, and all the other Vulcans made fun of him. His human side would erupt in anger and beat up on his Vulcan classmates. Because of his brilliance, he was chosen to design the test for the Star Fleet cadets.

Dr. Leonard McCoy, Kirk’s best friend in Star Fleet, decides to smuggle Kirk onto the Enterprise through the sick bay by injecting him with a virus. As they’re going on their first mission in space, they hear the Romulans have attacked the Vulcan home planet. It is Captain Nero again trying to take revenge on Spock for letting his own planet be destroyed in the future.

One crisis after another develops. [Possible spoilers follow] Spock banishes Kirk to an empty planet, where he meets Spock’s older self. Kirk also meets Scotty, an engineer who figures out how to transport him into hyperspace back onto the Enterprise.

When the young Spock’s human nature gets the better of him, Kirk becomes Captain and has to lead the Enterprise crew against the seemingly invincible Captain Nero.

There’s a lot to like in STAR TREK. The first scene captures the audience’s emotions with the birth of Captain Kirk happening as the same time his father’s spaceship explodes. Life and death are intense moments, and the intensity of the story hardly lets up until the very end, which is an homage honoring the original STAR TREK series.

Furthermore, there is strong moral worldview where good triumphs and loyalty is honored. Moreover, the infant Kirk’s life is special. Better yet, these heroes are willing to sacrifice themselves for others.

That said, there are some troubling aspects to this STAR TREK. It seems to honor cheating, rebellion and several other immoral qualities, which its namesake would never have done. Gene Roddenberry and I, Ted Baehr, partnered on a project together. Although he began to drift after his divorce and remarriage, his Christian upbringing had a profound influence on the first STAR TREK television series. The good guys were good, and the bad guys were bad. Gene said the Enterprise was like wagon train in the sky. These were families exploring in space, not just a military outfit. The later STAR TREK programs became more earthy, eclectic and less focused on eternal biblical values.

This new STAR TREK is a more messy, amoral universe. Even Captain Nero has valid reasons to be upset with Star Fleet, though the movie shows that his anger and lust for revenge get the better of him. Furthermore, in this movie, there is a sex scene, which is not consummated, and a smattering of foul language. The violence is intense but not excessive.

On the positive side, the special effects are terrific. The direction is very nuanced and skillful, bringing memories of the original characters and stories without replicating them. The sound effects and music are powerful, and there is no doubt that this is a four star, entertaining popcorn movie with some inspiring moments.