THE EDUCATION OF LITTLE TREE 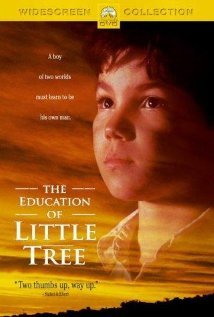 In THE EDUCATION OF LITTLE TREE, nine-year-old, mixed-blood, Cherokee orphan Little Tree (Joseph Ashton) comes to live with his grandparents after the death of his mother and father. In an eventful year in which he shares the simple joys and sorrows in the lives of his hillbilly, moonshine-brewing white grandfather and loving Cherokee grandmother, Little Tree acquires valuable life experience and learns the Cherokee religion instead of the Christianity of his deceased mother.

With great aesthetic beauty, THE EDUCATION OF LITTLE TREE has an exquisite musical score, with lilting violin melodies and haunting refrains set against a magnificent Tennessee mountain backdrop of lovely hills and cloud-filled valleys. This movie has a gorgeous setting, good acting, good music, and otherwise moral message about self- reliance, racial harmony and love for nature and for one’s family. Although Paramount trumpets the message of tolerance which they say lies within the story, THE EDUCATION OF LITTLE TREE actually pushes Cherokee religion. The Christians in the movie act like hucksters and buffoons, and demean the love and power of Jesus Christ’s salvation. Thus, by the way it exalts Cherokee beliefs and denigrates Christianity, THE EDUCATION OF LITTLE TREE promotes a false, pagan religion.

(Pa, Fr, PC, L, A, M) Pagan, politically correct worldview, advocating a false religion with biblical elements of respect for other human beings; 5 profanities; no sex; no nudity; alcohol use; and, shamanism.

In THE EDUCATION OF LITTLE TREE, screenwriter Richard Friedenberg turns his attention to the Tennessee backwoods in his first directorial effort following his critically-acclaimed and artistic success in writing about a Montana backwoods preacher’s family in the film A RIVER RUNS THROUGH IT. Aesthetically magnificent, morally admirable, but philosophically flawed, THE EDUCATION OF LITTLE TREE presents audiences with a simple, sweet story of childhood innocence co-opted by Cherokee religious beliefs.

The story starts as nine-year-old Cherokee orphan, Little Tree (Joseph Ashton), comes to a rural Tennessee town at the bottom of the Depression in 1935 to meet his adoptive grandparents, Grandpa (James Cromwell) and Grandma (Tantoo Cardinal). They have decided that he will start life over again with them in their Tennessee backwoods cabin. As they walk out of town with him, his maternal aunt vociferously objects, demanding that Little Tree come live with her, shouting to Grandpa and Grandma that it is not right that Little Tree grow up with them. With a stern rebuke, Grandpa silences her and escorts the boy to his ramshackle cabin in the Tennessee backwoods, where he tucks him in for the night.

Next morning, Grandpa wakes Little Tree to invite him to help harvest corn, then shows him the moonshine still, hidden in the hills where the federal agents can’t find it. As he brews the day’s batch, he warns the boy against slipshod distilling methods, which he says poison the customers. Wanting to train Little Tree in moonshining so that the boy will know a trade, he invites him to fetch firewood for the still from the surrounding forest. Little Tree meets Willow John, a mysterious, taciturn Cherokee Indian shaman, who bear hugs Grandpa and accompanies grandfather and grandson back to the cabin.

There, as Grandma serves him a simple dinner, Willow John recounts the infamous, tragic forced march of the Cherokee Indians from Tennessee to Oklahoma in 1838, called “The Trail of Tears.” Little Tree learns that the long-suffering Cherokee victims of white greed kept their dignity when they were forced to trek from their ancestral lands. They refused the whites’ invitation to ride horseback and walked the entire distance on foot without shedding a tear. The tears came from white witnesses of the tragedy.

Back in the cornfield the next day, Grandpa explains his marriage to Grandma and how his choice of an Indian wife alienated his white relatives. He rationalizes his alienation from white society by saying that white people often lay claim to land not their own. He says he has discovered a better guiding principle in the Cherokee Way, which he proceeds to teach to Little Tree (and, by extension, to the movie’s audience). He notes that many men walk around physically alive, but spiritually dead. Later, in the cabin, Grandma adds that the only way Little Tree can make his spirit big is to work on it. She advises he use it to remember past lives and thus gently inculcates the inhumane and anti-Judeo-Christian philosophy of reincarnation.

Because they live so far from the school, Grandma home schools the boy in arithmetic and reading. On Sunday, Grandma and Grandpa attend a backwoods church where the parishioners behave like buffoons. Instead of preaching, the preacher defers to a visiting politician, who delivers a self-serving address to the credulous congregation, prompted by the preacher, who never once refers to Jesus or to the power of His salvation.

After federal agents discover Grandpa’s still, Little Tree’s aunt serves Grandpa and Grandma with a complaint charging them with neglecting his education since they don’t send him to school. Despite Grandpa’s pathetic yet understandable attempt to block Little Tree’s transfer by appealing to a backwoods lawyer, state welfare agents remove the boy to an Indian boarding school, where no vestige of his Cherokee Indian heritage is tolerated. A fanatically strict teacher beats Little Tree for forthrightly telling the class that the deer in a classroom poster were mating, and the headmaster locks him in a grim detention room. Lonely, he gazes out the window at the Dog-star in the sky, in mystical obedience to Grandma, who told him to call out to them through the Dog-star whenever he is in trouble.

After a fawning theatrical event put on by condescending whites who visit the Indian school, Little Tree escapes with the aid of Grandpa to return to his backwoods cabin. Grandpa later says that Willow John heard Little Tree’s prayer and informed Grandpa that he was in trouble.

Several months later, Grandpa interjects his body between Little Tree and a hissing rattlesnake and gets bitten. Although he recovers from the snakebite, Grandpa dies shortly afterwards. Then, Grandma dies, leaving Little Tree alone again.

Willow John comes to take Little Tree away and to train him in Cherokee shamanism. The movie ends as Little Tree calls four of Grandpa’s mountain hounds to follow him to Willow John’s hut.

There is great aesthetic beauty in the film. With an exquisite Mark Isham-composed musical score, with lilting violin melodies and haunting refrains set against a magnificent Tennessee mountain backdrop of lovely hills and cloud-filled valleys, THE EDUCATION OF LITTLE TREE has a gorgeous setting, good music, outstanding acting, gentle story, and an otherwise moral message about self reliance, respect for nature and for oneself, racial harmony, and love for one’s family.

On the other hand, whereas Paramount trumpets the message of tolerance which they say lies within the story, THE EDUCATION OF LITTLE TREE actually presents the Cherokee religion as benign and morally superior to the mean-spirited and greedy Christian religion of the white mountain folk. The movie portrays Grandpa and Grandma as mythic heroes who struggle against bigotry and intolerance to live their lives freely and to raise their orphaned grandson in an atmosphere of love. Although they do display admirable love and care for Little Tree and for Willow John, their Cherokee shaman friend, never once in the movie is the need for Jesus Christ’s love and forgiveness presented as liberating and vital. The Christians in the movie act like hucksters and buffoons, and so they demean the power and love of the Savior Jesus Christ to Whose worship services the good backwoods people faithfully go each week (including Grandma and Grandpa, who says he wants to get over with the service). Thus, by the way it exalts Cherokee beliefs and denigrates Christianity, THE EDUCATION OF LITTLE TREE promotes a false religion.