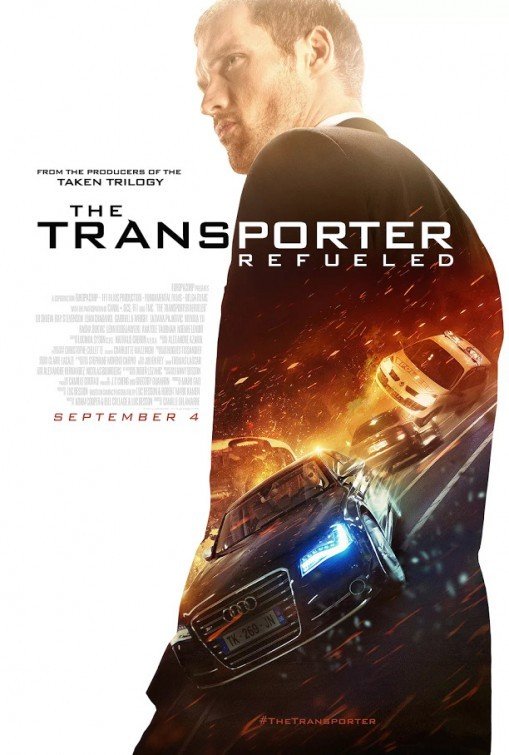 THE TRANSPORTER REFUELED is a reboot of the action franchise starring Jason Statham, with Ed Skrein of GAME OF THRONES taking over the title role. This time, Frank Martin is tricked into being the getaway driver on a $300 million bank robbery designed to wipe out the finances of a Russian crime kingpin who forced many women, including a revenge-minded woman named Anna, into prostitution. After 20 years on the streets, Anna has learned enough about the criminal operation to destroy it. She teams up with three other female victims. Anna and Frank get romantically involved as they race across various European locales to pull off Anna’s plan; only to find that the crime boss has kidnapped Frank’s father. This plot description sounds like THE TRANSPORTER REFUELED might be a pretty good action movie, but, sadly, it’s not. Most of the action scenes are by-the-book, the plot is flimsy, and the characters are one-dimensional. THE TRANSPORTER REFUELED involves getting justice against a crime boss engaged in sex trafficking, but there’s lots of intense violence and some foul language. Extreme caution is advised.

(PaPa, B, Ho, LL, VV, S, N, A, DD, MM) Strong mixed pagan worldview with moral elements of former sex slaves bringing justice and some revenge to their former crime boss, including giving some of his money to his victims, plus women kiss as part of a distraction; 11 obscenities and two profanities; very strong violence includes frequent fights involving the hero against multiple assailants with punching and kicking and throwing, several gunfights involving multiple machine guns, knives used to slash at people but not too graphic effect, several car chases, car flies off ramp and lands on a plane taking off, women set fire to criminal enterprises, hero’s father taken hostage and his life is threatened; implied fornication, references to being a sex slave and forced into prostitution, and women kiss to distract people; upper male nudity and females in skimpy outfits; alcohol use; no smoking but person found dead of a heroin overdose; and, revenge, abuse of women discussed, bank robbery, kidnapping.

THE TRANSPORTER REFUELED is a reboot of the action franchise starring Jason Statham, with Ed Skrein of GAME OF THRONES taking over the title role. This time, a former sex slave and prostitute seeking revenge against her crime boss tricks Frank Martin into being the getaway driver in a bank robbery of the criminal’s hidden stash. THE TRANSPORTER REFUELED involves getting justice against a crime boss engaged in sex trafficking, but the plot is flimsy, the action scenes are by-the-book, and the characters are one-dimensional, plus there’s lots of violence and some foul language. Frank Martin is known as The Transporter, a person who will deliver any “package” if paid enough money. Transporters normally avoid getting to know their clients well, including eschewing any knowledge about the package, if they can avoid it. However, Frank is tricked into being the getaway driver on a $300 million bank robbery designed to wipe out the finances of a Russian crime kingpin who forced many women, including one bent on revenge named Anna (Loan Chabanol), into prostitution. After 20 years on the streets of Paris, Anna has learned enough about the criminal operation to take it down. She teams with a couple of other model-quality sex slaves and starts executing a multi-step revenge plan. Anna and Frank also get personally involved as lovers as they race across various French and other European locales to pull off the plot – only to find that Frank’s father has been kidnapped by the crime syndicate. This forces Frank’s hand, making him race against time to save his dad and have a final showdown with the evil crime boss and his henchmen. This may sound like a pretty good action movie, but sadly, THE TRANSPORTER REFUELED is not. Its fight scenes and most of its car chases are by-the-book and have been seen and better done in countless other action movies. The plot is flimsy and clichéd, the characters are one-dimensional, and the acting is flat and wooden. In some scenes, it’s painfully obvious that the filmmakers merely edited in decades-old footage of exotic locales rather than going to them and filming them afresh. The movie’s bad writing also makes it hard to care enough to root for The Transporter and the gang of women. They only become humane and likable in the movie’s closing moments as one last twist reveals a special series of thank you’s and gifts that the ladies dispense. That final twist isn’t enough to save the day, so media-wise viewers may want to transport themselves to another, preferably faith-based or family-friendly, movie in their local multiplex.