"Open Your Eyes to Faith" 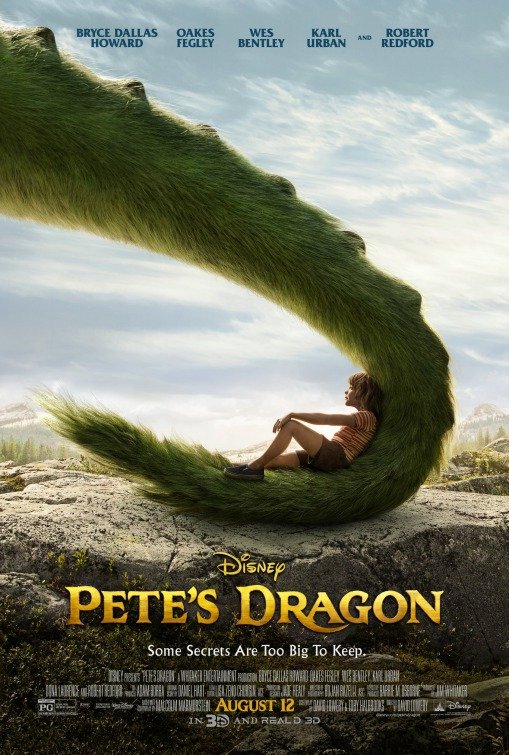 PETE’S DRAGON opens with 5-year-old Pete driving with his parents through the woods. A deer jumps out, the car swerves and flips, and Pete survives with his little picture book for company. Running into the woods, he’s surrounded by wolves, which are scared off by a dragon that can appear and disappear. Pete names the dragon “Elliott.” Elliott befriends Pete and becomes his guardian angel. Years later, loggers discover Pete, who’s become a wild child. They take Pete into town. Now, Pete wants to get back to Elliott, and Elliot wants to find Pete.

The PETE’S DRAGON reboot is better structured than the original with jeopardy, heartrending incidents and humor. There are some action violence moments that are a little scary. However, this movie is filled with good, including the villain coming to realize the error of his ways. The movie’s point is to open your eyes to faith. It is a very satisfying, enjoyable, lovable fantasy. PETE’S DRAGON is great for children, who’ve experienced great loss. Minor caution is recommended because of the fantasy issues of dragons and other realities.

(BBB, C, O, E, L, V, S, M) Very strong moral worldview about courage in the face of obstacles, caring, love, friendship, sacrifice for others, and never abandoning your friends or family, with references to magic but the magic is not nominalistic, but more of a Judeo-Christian perspective that we live in a real world, but that spiritual things are real too, and direct references to just because you don’t see something doesn’t mean it’s not real, but some question about whether the dragon is real or imaginary, though he comes across as real, with of course references to dragons, which in the Bible also refers to the Adversary, Satan, but also refer to God’s biggest creations, often called Leviathan, flying reptile, though this dragon is more like a furry guardian angel, not a fallen adversary, plus slight environmentalist suggestions; very light exclamatory words that can be taken either as prayers or fear; action violence including some scary scenes with wolves, with a dragon, with a car crash, with the dragon attacking and destroying a bridge and with shooting tranquilizer darts and perhaps bullets to capture the dragon; there’s a suggestion a couple is living together before marriage and a wedding photo at the end of the movie, but it’s very vague; no nudity; no alcohol; no smoking; and, the villain is greedy and disobeys the rules, villain wants to build his fortune on capturing Pete’s Dragon.

PETE’S DRAGON is a new and much improved version of the Disney classic. It is a heart-rending, jeopardy-filled, young person’s adventure story that’s meant to build courage and compassion.

The movie opens with a beautiful shot of little 5-year-old Pete driving with his parents through the northern woods. Suddenly, a deer jumps out, the car swerves and flips, and Pete survives with only his little picture book about being lost with Elliott. Running into the woods, he’s surrounded by wolves, which are scared off by a dragon that can appear and disappear. He calls the dragon “Elliott.” Elliott befriends Pete and becomes his guardian angel.

Several years later, a logging company run by Jack and his brother, Gavin, is approaching the deep woods where Pete lives. Jack has a girlfriend, Grace, who’s a forest ranger. She has a father, Mr. Mitchum, who says he saw a dragon many years ago in the woods. Little Pete, who’s become a wild child, sees Grace and grabs her compass. Pete and Elliott happen upon the logging company, which is going beyond the area for their logging.

Eventually, the loggers see Pete, capture him and bring him into town. Pete wants to get back to Elliott, and Elliot wants to find Pete. Now the town must face the possibility the myth of the dragon might be true. In the process, people need to learn compassion, courage, love for one another, and to have faith. There’s more to the world than what we clearly see.

The PETE’S DRAGON reboot is much better structured than the original. It’s got a lot of jeopardy and some heartrending incidents and even some humor. There are one or two plot devices that of course are incredible or unbelievable, but they are woven well into the story. Also, there are some very minor, almost insignificant plot holes.

In a very real sense, the dragon is Pete’s guardian angel, or at least a big flying puppy dog that loves Pete. The movie’s point is to open your eyes to faith.

That said, in the Bible, dragons are portrayed in two ways. One is as the evil fallen angel, Satan, and other is as God’s largest creation, a reptile who can fly and that’s sometimes called “leviathan”, and can also be called “dragon”. Furthermore, the references to magic are not the manipulative magic of the occult, but like Lewis and Tolkien that there’s a spiritual world out there. In this sense, the movie is almost an Irish folktale.

There are some action violence moments that are a little scary. However, this movie is filled with good, including the villain coming to realize the error of his ways. It is a very satisfying, enjoyable, lovable fantasy. It is especially good for children who’ve experienced great loss in their lives.