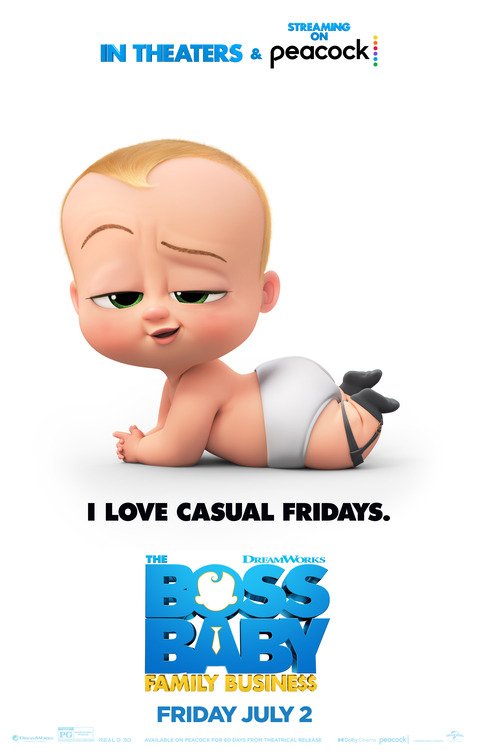 (CCC, BBB, ACACAC, CapCap, L, V, N, M):
Dominant Worldview and Other Worldview Content/Elements:
Very strong Christian, moral, pro-life, pro-family, anti-Communist-anti-government indoctrination worldview where taking care of one’s family and not allowing the secular educators to steal our children drives the plot, and it’s clear parents love their children, the movie’s “Baby Corp” setting is an allegory for babies coming down from Heaven, a baby Jesus and angel appear in a Christmas pageant, there’s a reference to the “hounds of Hell,” movie stresses the beauty of a child’s innocence and not growing up too fast, teachers see the potential in educating children, but an educator wants to take all authority away from parents, and there’s a stress on good parenting and not being a slave to technology, with strong pro-capitalist views on working for a living, but also seeing the value of a healthy work/life balance.
Foul Language:
No obscenities, one OMG profanity, some burping jokes, crap is said once, stupid is said twice, and a few “Oh my gosh” exclamations
Violence:
Some imaginative action sequences and slapstick violence, including baby ninjas throw throwing stars and other sharp objects at a fellow baby, babies run into walls and get bonked on the head, etc.
Nudity:
Rear baby nudity
Alcohol Use:
No alcohol use
Smoking and/or Drug Use and Abuse:
No smoking or drugs; and,
Miscellaneous Immorality:
Male children dress in girl’s clothing in one scene because there isn’t any boy clothing available, and there’s some bullying.

The movie begins with voiceover narration by Tim’s as a montage play depicting the growth of Tim’s family since the first BOSS BABY movie. Now, Tim is a parent of two daughters, Tina, a toddler, and Tabitha, a second grader. Tim’s wife, Carol, is the breadwinner of the family and Tim refers to himself as a “Stay-at-home-dad,” but it’s clear he loves the quality time he spends with his children.

One evening around Tabitha’s bedtime, Tim gets a cold shoulder from Tabitha when he goes to sing her a goodnight song. Apparently, Tabitha wants to do away with childish things like bedtime songs in favor of studying to ensure a successful future for herself. The reality of Tabitha’s growing up gives Tim some pause until the next day when his little brother, Ted, comes to visit from his big, swanky corporate job.

To Tim and Ted’s surprise, the pair learn that Tina, Tim’s youngest daughter, works at Baby Corp, an organization in the sky dedicated to the greater good of all babies around the world. Because Tina works there, she can speak and act like an adult too! She tells them there’s something wrong at Tabitha’s fancy school for “advanced childhood.” She makes Tim and Ted take a pacifier, which turns them into a young child and a baby respectively. Now, the brothers have to blend in as children.

Tim goes to school with Tabitha, who’s incredibly bright. Tabitha sits under the leadership of a headmaster named Dr. Erwin Armstrong. Dr. Armstrong pushes the children to new heights when it comes to competitive learning, but something seems off about his motivation. Later, Tim learns that Dr. Armstrong doesn’t want parents to have any authority over their children, and he’s planning an evil takeover that will come to a head at the annual Christmas pageant!

Will Ted, Tim and Tabitha be able to stop Dr. Armstrong before it’s too late?

THE BOSS BABY: FAMILY BUSINESS is laugh-out-loud funny and beautifully animated. The script has puns, wit and great characters who keep the movie in tip top shape. The cast of voices, including Jeff Goldblum, Eva Longoria, Alec Baldwin, and James Marsden to name a few, are well suited to their animated counterparts. There’s also some comical use of slow-motion that will appeal to children. If viewers enjoyed the first BOSS BABY, chances are they’ll enjoy this one too.

THE BOSS BABY: FAMILY BUSINESS has a strong moral worldview where taking care of one’s family drives the movie. The movie also stresses how babies come from above and the beauty of a child’s innocence and not growing up too fast. As such, it might remind viewers of the scripture in 1 Corinthians 13:11, “When I was a child, I talked like a child, I thought like a child, I reasoned like a child.” There are some Christian elements that include a Christmas pageant with a character dressed up as an angel and even a depiction of a baby Jesus. Also, a pro-capitalist sentiment is expressed in the value of working hard. FAMILY BUSINESS has some moderate slapstick violence and brief potty humor. Ultimately, however, THE BOSS BABY: FAMILY BUSINESS is a delightfully wholesome movie the whole family can enjoy.