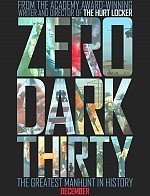 ZERO DARK THIRTY is about the killing of Usama bin Ladin, the leader of Al Qaeda, the Muslim terror group. The movie opens with a black movie screen while the screams of people dying in the Twin Towers on 9/11 can be heard. Cut to a CIA black site. Dan, an interrogator, is ruthlessly interrogating a money handler for Al Qaeda. Maya, an attractive, well-dressed woman, comes into the interrogation room, her first day in the field. Dan and Maya continue their interrogation work in Pakistan and Afghanistan to find bin Ladin. Just as they seem to be getting close to him, the higher powers in Washington, D.C., led by President Obama, start to waffle. However, Maya becomes even more driven to find bin Ladin.

(C, BB, PPP, LLL, VVV, N, AA, D, M) Light Christian worldview with a female hero who believes her life’s been spared so she can help capture Usama bin Ladin, with a mention of “God and country” and the heroine weeps for the tragedy she’s seen, with many strong moral points, including the one clip of President Obama makes him look like someone who’s preventing the capture of bin Ladin because he stops all interrogations and provides captured Al Qaeda members with lawyers, thus frustrating the search for bin Ladin, the leader behind 9/11 and other attacks on the West, plus very strong patriotic, very Pro-American, very pro military, and very Pro-CIA content that shows the Muslim jihadists in an extremely negative light; 68 obscenities (with many “f” words) and two light profanities (OG); very strong violence includes women shot, children shot, prisoners beaten, prisoners waterboarded, prisoners walked around in dog collars, explosions, scenes of 9/11 in black and white, shootouts at bin Ladin’s hideout; no sexual content; upper male nudity and rear male nudity when prisoner’s pants are pulled down; alcohol use and drunkenness; lots of smoking; and, lying, deception, interrogation.

ZERO DARK THIRTY is an extremely well-made, very powerful movie about the killing of Usama bin Ladin, the leader of Al Qaeda, the Muslim terror group that attacked New York City in 2001 and later bombed London and Madrid.

The movie opens with a black movie screen while the screams of people dying in the Twin Towers on 9/11 can be heard. One woman says, “I’m gonna die, I’m gonna die,” to the operator, and the operator just tells her to lie down on the floor and wait for the firemen, which was the wrong thing to do. When the line goes dead, the operator says, “Oh God.”

Cut to a CIA black site where Dan, an interrogator, is ruthlessly interrogating a money handler for Al Qaeda. An attractive, well-dressed woman named Maya is brought in to the interrogation, her first day in the field. The interrogation is intense, but it’s clear that it’s necessary to stop another Al Qaeda attack.

Working with Dan, Maya brings intelligence and strategy to the interrogation. She discerns there’s a common thread to the prisoners. Apparently, Usama bin Ladin relies on a secret messenger going by the name Abu Ahmed.

Dan and Maya continue their interrogation work in Pakistan and Afghanistan to find bin Ladin. Just as they seem to be getting close to him, the higher powers in Washington, D.C., led by the new president, Barack Obama, start to waffle on pursuing bin Ladin. Dan doesn’t want to put up with the new policy, so he decides to leave the field. He tells Maya he’s going back to Washington, D.C., and she should do the same to protect her repurtation.

Maya, however, becomes depressed that they’re not finding Usama bin Ladin. While visiting a friend in a Pakistan hotel, the hotel blows up. Maya and her friend barely escape with their lives.

Later, her friend decides she has a great lead to Usama bin Ladin. She meets with a doctor who’s going to bring information about bin Ladin. However, it’s a ruse. There’s an explosion, and some CIA agents are killed. This makes Maya even more driven to find bin Ladin.

Eventually, Maya locates Usama’s messenger in Pakistan taking messages to a compound in Abbattobad. Maya has to convince a very reluctant Obama White House to take the compound. The rest, as they say, is history.

ZERO DARK THIRTY is very patriotic. After her friends are killed in Pakistan, Maya states, “I believe I’ve survived to capture Usama bin Ladin.” In the end, they talk about going into bin Ladin’s lair for “God and country.” The CIA and the military are seen as good guys trying to protect people. Al Qaeda is seen as constantly attacking and killing innocent people. The good guys try to stop this slaughter. They understand the gravity of the situation as they strive to protect America and Western Civilization.

Director Kathryn Bigelow is a brilliant filmmaker. However, you never see the villain in ZERO DARK THIRTY. So, the villain is always behind the shadows. A great hero needs a great villain. Without having a villain, then everything is done in reaction to the attacks. Thus, at the end of ZERO DARK THIRTY, when everything is solved, there’s little feeling of exhilaration about defeating a nefarious force.