THE LADY AND THE DUKE

"He Who Saves His Life Shall Lose It" 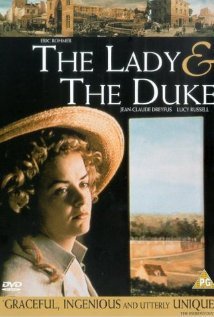 THE LADY AND THE DUKE is an engaging historical, slice-of-life drama detailing the friendship between Lady Grace Elliott, a Scottish aristocrat, and the Duke of Orleans, who take opposite sides of the French Revolution. Despite their fond friendship, and contrary to the pleadings of Lady Elliott, the Duke votes to execute his own cousin the King, mainly, it seems, to separate himself from the aristocrats and the royalists in his own family, though it is not to be denied that he saw the King as a criminal and traitor. While this causes the most drastic testing of Grace and Philippe’s friendship, they somehow manage to remain cordial and concerned for one another, even when death separates them.

THE LADY AND THE DUKE presents a unique slice-of-life perspective on the miserable times of the French Revolution. It rebukes the violent actions of the socialist rebels. Also, Lady Grace often credits her survival to the work of God. Despite this, she uses playing cards to read one person’s fortune in one scene. THE LADY AND THE DUKE also contains some scenes of violence. Therefore, MOVIEGUIDE advises caution for younger children and, perhaps, older children.

(B, So, O, VV, A, M) Moral worldview where main character credits God, many times, for her safety, boldness in the face of danger, and deliverance from harm; mock trials by violent socialist rebels during French Revolution; main character reads playing cards (as tarot) for her guest and warns him to listen to her this time as the last time he ignored her and fell into the trouble she forewarned; no foul language; as main character escapes Paris she witnesses fighting and killing in the streets between revolutionaries and the King’s soldiers, a scene of stabbing with a sword, violent beatings, bloody dead soldiers and rebels in the streets, the bloody, severed head of the Duke’s sister-in-law paraded on a stake; no sex; no nudity; moderate drinking of wine in one scene, therapeutically, to calm the nerves; no smoking; and, betrayal, false accusations and socialist revolution in France rebuked.

THE LADY AND THE DUKE is an engaging historical drama inspired by the actual memoirs of Lady Grace Elliott: “A Journal of My Life during the French Revolution.” The story presents a unique slice-of-life perspective from those miserable times. The movie covers the tumultuous, yet loyal, relationship between the Scottish aristocrat, Elliott (Lucy Russell,) and Philippe, the Duke of Orleans (Jean-Claude Dreyfus), King Louis the XVI’s revolutionary cousin, wherein each zealously take opposite sides of the French Revolution.

While the Duke politically supports the revolution, and the Lady despises the revolutionaries, they remain loyal friends, as passionately loyal to their relationship as their politics. When strong-willed Grace harbors a wounded fugitive from the mobs, a man she not only personally despises, but one the Duke is politically furious with due to a wartime scandal, Philippe still helps the Lady rescue him from certain death for the sake of saving her life from punishment for harboring an enemy of the people.

While she is rescuing the man, Grace determinedly tells him, “I will either rescue or perish with you.” At one point, she hides him under her mattress and remains in bed while the French revolutionaries search her home for fugitives and contraband. She carries on a tense conversation with the leader of the troops and later proclaims that, in confronting peril, “God gave me courage . . . by losing the fear of death, we were saved.”

Grace Elliott witnesses and denounces the atrocities of war throughout the film. As she grieves the sight of the Duke’s sister-in-law’s head being paraded through the streets she cries, “Enlightenment! The philosophers should open their eyes.” In light of the horrors, even the Duke has to admit that the revolution went where he never intended it to go, but that he was a slave to a “faction.”

Despite their fond friendship, and contrary to the pleadings of Lady Elliott, he votes to execute his own cousin the King, mainly, it seems, to separate himself from the aristocrats and the royalists in his own family, though it is not to be denied that he saw the King as a criminal and traitor. While this causes the most drastic testing of Grace and Philippe’s friendship, they somehow manage to remain cordial and concerned for one another.

Regardless of their politics, both eventually end up accused and arrested under suspicion of anti-patriotism. Ironically, Philippe, the Duke, who so adamantly supported the revolution, is found suspect, due to his own son’s defection. He is eventually beheaded. The Lady is later released without explanation. She says that, without God and her faith to support her, she would have been another victim of the patriots’ fervor. It seems, in the end, she reaped the mercy she had sown.

Even though the characters don’t live what in today’s society we would call a “Christian lifestyle,” they do reason from a biblical worldview, if not a classical humanism. In particular, Grace openly credits the resolve, mercy and bravery shown both her friends and enemies in the face of a revolution gone wild to God and her faith in Him. Yet, she has been passed from man to man in the royal family and takes stock in tarot readings she performs. The level of revelation the general masses had of God and Christ was minimal as the Roman Catholic Church in France still pretty much held a tight grip on things eternal.

A bonus, visually, is that the movie was created on digital video rather than conventional film. All of the “exterior” scenes were shot in a process called “blue screen.” This allows the filmmakers to put the characters in whatever atmosphere they wish. The director, Eric Rohmer, had artist Jean-Baptiste Marot paint landscapes, city streets and cottages for the characters to be superimposed over. The distant tiny characters showed definite signs of electronic noise, but after a while, one’s eyes adjust and accept the beautifully crafted scenery as reality.