POINT OF NO RETURN 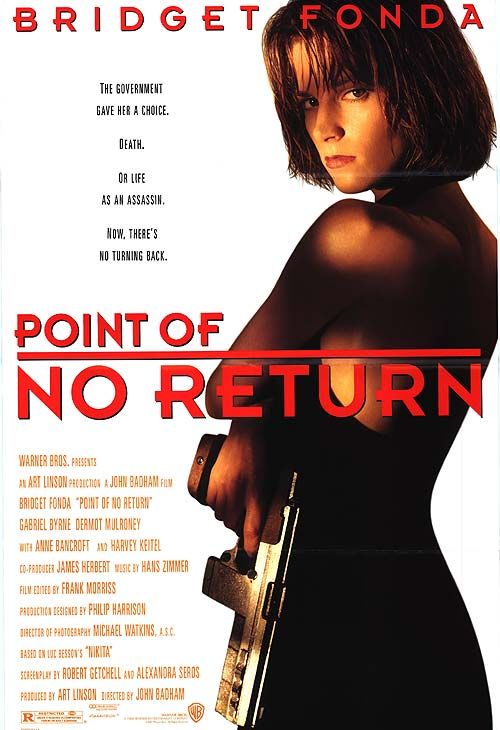 In POINT OF NO RETURN, a remake of the French LA FEMME NIKITA, Maggie (Bridget Fonda) is a convicted felon who avoids the electric chair by joining a covert organization of high-level assassins. As she is educated to fit in with her elite victims, she develops a conscience, resulting in a strong desire to leave her new profession. This psychological thriller is well-crafted, but contains many obscenities, excessive violence and several scenes of fornication.

In the POINT OF NO RETURN, an adaptation of the 1991 French film, LA FEMME NIKITA, the character of Maggie (Bridget Fonda) proves to be just as obnoxious and unbelievably tough as the French Nikita. Maggie, a drug-addicted misfit convicted of murder in the first degree, is on death row. However, a covert agency that specializes in assassinations intervenes thinking they can transform Maggie into a sleek, sharp killing machine they can use in their operations. Bob (Gabriel Byrne) becomes her guiding mentor through the difficult process of re-training, while Amanda (Anne Bancroft) teaches Maggie the manners she will need to blend in with the elite victims she must stalk. Finally, where once a vicious outcast confronted them, Bob and Amanda now see an intelligent, lovely and hesitantly affectionate human being. When Maggie is sent back out into the world to await her first assignment, she falls in love with J.P., a young photographer, and develops a conscience. Caught in a catch-22 situation, she finishes countless bloody killings successfully, but increasingly, she hates what she does.

POINT OF NO RETURN is an action-filled, well-crafted psychological thriller, but extremely violent and bloody. In addition, the language, especially in the first part of the film, consists of an abundance of obscenities. The violence, rebellion and language, together, contribute to an overall feeling of despair and hopelessness.